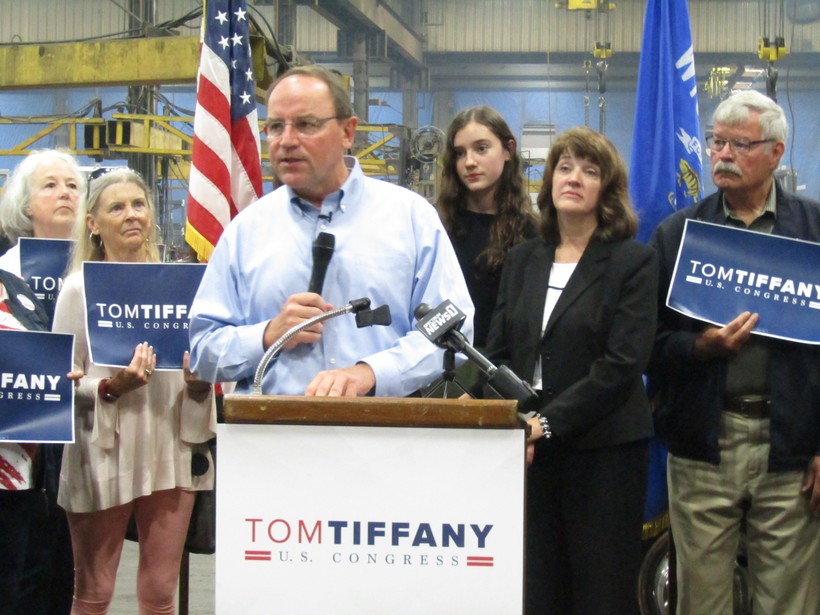 In Congressional Campaign Launch, Tiffany Takes A Dig At Democrats

The special election in Wisconsin’s 7th Congressional District has its first official contender.

In August, Rep. Sean Duffy, R-Wausau, announced he would resign from the office as his wife, Fox News commentator Rachel Campos Duffy, faces complications in her pregnancy. Duffy's resignation is effective Sept. 23, and a special election will follow.

In morning events in Rhinelander and Schofield, Tiffany acknowledged the national attention the race will bring, praising Republican President Donald Trump and repeatedly referencing Democratic House Speaker Nancy Pelosi. Those events were to be followed by stops in Cadott and Hudson on Tuesday, and Rice Lake, Hayward and Superior on Wednesday.

That schedule demonstrates the sprawling nature of the congressional district, which extends from Wausau west to St. Croix County and includes nearly the entire northern border of Wisconsin from Superior to Florence County. The mostly rural district provided some of the state's highest voting margins for Trump in the 2016 election, and the special election, whatever the outcome, is likely to be seen as a bellwether for Trump's 2020 re-election chances in Wisconsin.

Tiffany acknowledged as much in his speech.

"Nancy Pelosi is salivating about a low-turnout special election to flip a seat in Trump country," he said. "She is counting on us being divided. Let's come together in the coming months to keep this seat red."

State law dictates that the governor cannot call a special election until Duffy resigns, so no date has been set for that election.

That hasn't stopped many candidates on both sides from weighing a run.

On Monday, state Sen. Jerry Petrowski, R-Stettin, said he had decided not to seek the office. Other Republicans who are reportedly considering a run include Rep. Romaine Quinn, R-Barron, and Wausau surgeon Fernando Riveron. Among Democrats, state legislators Rep. Nick Milroy, D-South Range, and Sen. Janet Bewley, D-Mason, are among those being discussed as possible candidates.

Tiffany is in his second term in the state Senate, and before that served in the Assembly. He is a longtime operator of the river cruise company Wilderness Cruises.

In his time in the Legislature, Tiffany was a strong advocate in the state's push to bring the Gogebic Taconite mining company to northern Wisconsin. He led a successful effort to change Wisconsin’s environmental laws in order to ease the path for the company to create a iron mine in northern Wisconsin. The project became a lightning rod for environmentalists and the subject of multiple legal challenges. The company ultimately pulled out of Wisconsin in 2015 without completing the mine.

In a statement, the Democratic Party of Wisconsin referred to Tiffany as "Toxic Tom Tiffany," a reference to the project, and said he has a "record of putting corporate special interests before the health and wellbeing of his constituents."

Tiffany in his speech praised the tax cuts passed in 2017 under Trump, crediting them with "turbo-charg(ing)" Wisconsin's economy. And his campaign launch left no doubt where he stands in relation to the president.