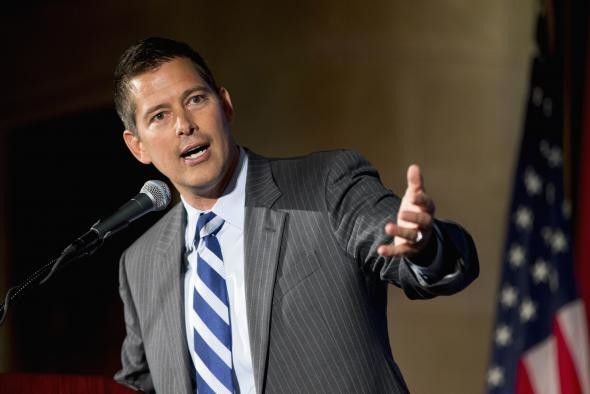 The congressman — who represents Wisconsin's 7th District — was first elected in November 2010, and won his fifth congressional term in November.

In his post, Duffy wrote after serving for eight and a half years, he was stepping down to focus on his family.

"Being away from home in Washington four days a week is challenging and for that reason, I have always been open to signs from God when it comes to balancing my desire to serve both my family and my country," he wrote.

Duffy and his wife, Fox News commentator Rachel Campos Duffy, are expecting their ninth child in October. Duffy said the child has been diagnosed with "complications, including a heart condition."

He said aside from marrying his wife, representing Wisconsin has been the "highest honor" of his life.

"Representing you — the people and families of Wisconsin's 7th District — in Congress has been the highest honor of my life. Together, we have engaged in the most important battles of our time: protecting freedom of speech and religious liberty, taking care of our veterans, defending the unborn, and saving American jobs and American capitalism," he wrote.

The 7th District is the state's largest congressional district covering 20 counties in northwestern and central Wisconsin. Duffy will step down Monday, Sept. 23.

Jim Miller, Republican chairman of the 7th District, told WPR that Duffy told staff and party members in a call Monday morning, and that very few, if any, staffers had advanced knowledge of the decision. Miller, a longtime friend of Duffy’s, said he’d heard the congressman and his wife discuss the toll that being in Washington, D.C. took on their family.

"It’s a family decision. I feel for him, and pray for him and his family," Miller said.

The 7th Congressional District was held for more than four decades by Democratic U.S. Rep. Dave Obey. Duffy won election in 2010 after Obey announced his retirement. In the years since Duffy's election, the mostly rural, Northwoods district became one of Wisconsin’s most reliably Republican-voting districts. The district's boundaries were redrawn by GOP legislators in 2011, removing Democratic stronghold Stevens Point and several other cities from the 7th Congressional District.

Rep. Pat Snyder, R-Wausau, is a former Duffy staffer. Snyder said Duffy traveled the district relentlessly and that his energy for appearing at public events helped him win votes. Snyder said he was unlikely to run for the office.

In a statement, state Sen. Tom Tiffany, R-Hazelhurst, said Duffy had been a "tireless advocate" for northern Wisconsin. Tiffany in a second statement Monday said he would consider running for the seat.

Former Gov. Scott Walker on Twitter wrote, "Our prayers go out to (the Duffys), their unborn baby and the rest of their family. Thanks for putting family first!"

In a statement, Republican Party of Wisconsin Chairman Andrew Hitt praised Duffy's service and called him "an exceptional proponent of conservative ideals."

Leaders from both parties said agricultural and trade policy will be major voting issues for the district's rural constituents.

Gov. Tony Evers will call a special election to fill the 7th District seat, his office confirmed Monday morning. The office is still researching what requirements are written into state law regarding special elections, including the timeline for calling and holding them.

The confirmation has spurred speculation about the timing of the special election — particularly whether it could fall on the date of Wisconsin’s Democratic presidential primary: April 7, 2020.

Interestingly, Obey, who preceded Duffy, began his more than 40-year Congressional tenure with a special election victory for the seat in 1969.

Republican Duffy has held the 7th District seat since 2011, but Democrats are eyeing the district as a potential gain for Democrats in Congress.

Democratic Party of Wisconsin chairman Ben Wikler said the district could be decisive again in 2020.

"If Democrats even push down the margins in the 7th (Congressional District) in 2020, that will threaten Trump's ability to be re-elected," Wikler said.

Though President Donald Trump defeated Democrat Hillary Clinton by more than 20 percentage points there in 2016, they point to a smaller, 3 point margin in the race between President Barack Obama and Republican Mitt Romney in 2012 as proof there is a chance Democrats could prevail.

However, insiders also point out redistricting in 2011 made the 7th District more conservative. They also argue rural areas in central and northern Wisconsin are trending conservative in recent years.

Miller, Republican chairman of the 7th District, said Duffy "took a rock-solid blue district and turned it bright red" in his time in Congress. And the high margins of victory Duffy helped GOP candidates gain in the district could have made the difference in Trump’s narrow 2016 victory in Wisconsin.

"We like to credit ourselves in the 7th District for putting (Trump) over the top, just because of the turnout that we got," he said.

Barry Burden, director of the Elections Research Center at the University of Wisconsin-Madison, said the district tends to favor Republicans.

"It really is a combination of the drawing of the district lines in a way that was intentional to favor Duffy and Republicans who were in charge of that process, but also just really migration of that district in the Republican direction," he said.

Burden pointed out the district is one of the most rural in the state, with lower levels of education and income.

"Those are the kinds of voters that have flocked to Trump," he said. Burden said Democrats' chances of flipping the district are low, "but not impossible."

He pointed out Democratic state Sen. Patty Schachtner, D-Somerset, won a special election in a state Senate district inside the boundaries of the 7th Congressional District in 2018, despite previous Republican control of the seat. Schachtner is the first Democrat to hold the seat since 2000.

"When you get a special election that’s outside the regular election cycle, unpredictable things can happen," Burden said.

Wikler told WPR that the enthusiasm advantage in 2020 will belong to the Democrats.

"Often special elections favor the party with the higher kind of voter intensity, and right now I think Democrats are really fired up,” Wikler said.