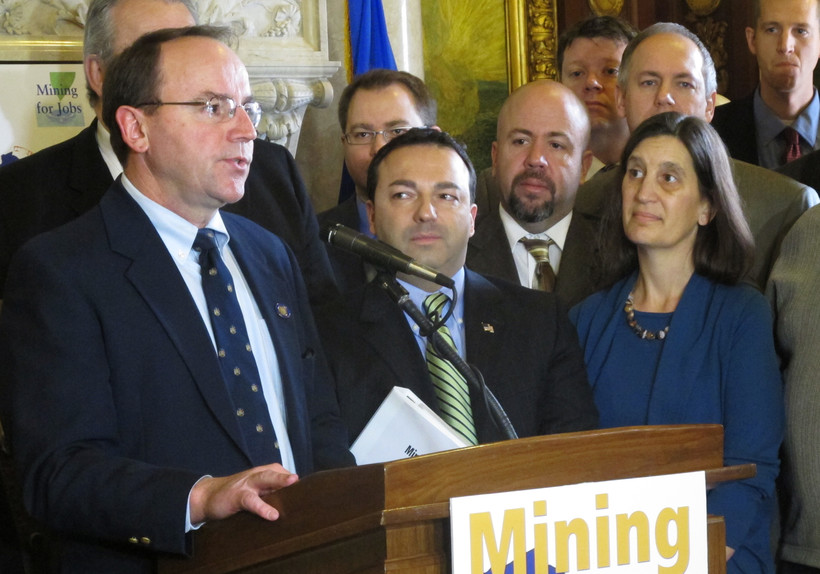 In this Jan. 16, 2012 file photo, Republican state Sen. Tom Tiffany, left, of Hazelhurst, describes the latest version of a bill that changes the process for allowing new iron ore mines to open in Wisconsin at a news conference with other state lawmakers in Madison, Wisconsin. Scott Bauer/AP Photo

District Is Held By Rep. Sean Duffy, Who Is Resigning
By The Associated Press
Share:

A Republican state senator is poised to enter the race for Congress in northern Wisconsin to replace Rep. Sean Duffy, who is resigning in two weeks.

Sen. Tom Tiffany, of Hazelhurst, said Monday he will make a "special announcement" Tuesday about the 7th Congressional District race. Tiffany plans seven stops across the district over two days.

Meanwhile, fellow Republican state Sen. Jerry Petrowski, of Stettin, said he will not run to replace Duffy. A number of other Republicans and Democrats are still weighing potential bids.

Gov. Tony Evers has yet to announce the dates for a special election.

Also, in suburban Milwaukee's 5th Congressional District, state Sen. Dale Kooyenga says he will not run. He was among those weighing a bid to replace the retiring Rep. Jim Sensenbrenner. That election will be in November 2020.