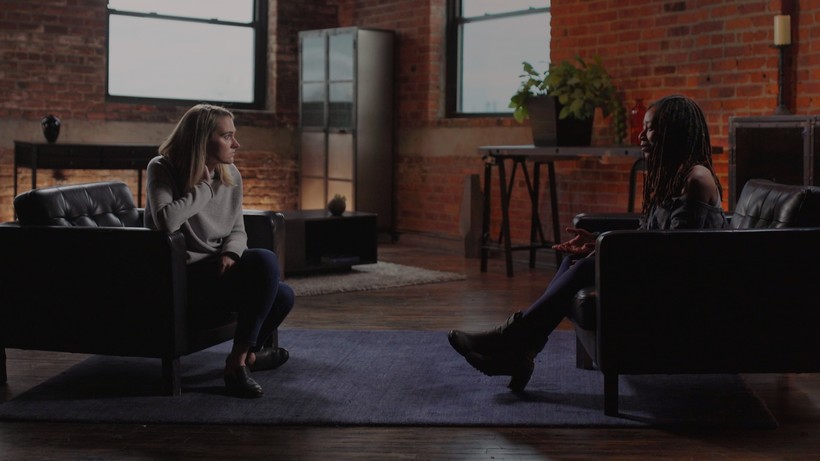 Comedian Jena Friedman learns the justice system is not that just

Jena Friedman is a writer and comedian. Her credits include writing for "The Late Show with David Letterman" and an Academy Award nomination for her contributions to the screenplay for "Borat 2: Subsequent Moviefilm." Friedman has also worked as a field producer for "The Daily Show with Jon Stewart."

Now she's rolling all of that experience into her latest project, "True Crime Story: Indefensible." The show airs on Sundance TV and streams on the AMC+ Television Network. In six episodes, Friedman explores how dysfunctional our criminal justice system can be.

One of the most fascinating things about "Indefensible" is how she manages to weave funny moments into stories about tragedy and injustice, without missing a beat.

"I don't think I would have ever been able to sell a true crime show with comedic elements," Friedman told WPR's "BETA."

"That was all AMC, actually," she continued. "They have been launching a true crime franchise. And I made fun of true crime on 'Conan.' And they saw that set and reached out to me, and they were like, 'Do you think we could make a true crime show that's like feminist and kind of funny?' And I said, I don't know. And then the pandemic happened, and I was like, 'Sure, anything's possible.'"

So Friedman and AMC executives began to develop this show which drew on the kinds of comedy work she had already done.

The first episode, "How Men Get Off," explores the case of Steven Steinberg which happened in Scottsdale, Arizona in 1981. Steinberg stabbed his wife Elena 26 times. He didn't deny that he committed the murder, but he claimed that he did it while he was sleepwalking.

Friedman was able to interview the forensic psychologist Dr. Martin Blinder. After interviewing the victim's husband, Blinder testified at the trial that Elena had driven Steven to such a high level of insanity that he must have been in a dissociative state of mind born out of trauma. In the interview, Blinder told Friedman "this was not a conscious act on his part." The jury found Steinberg not guilty on the grounds of temporary insanity.

It was this first episode that sold the series, Friedman said.

One of the best examples of Friedman's ability to incorporate humor into the show occurs in the first episode when she interviews Dr. Stephen Herman. Herman has more than 40 years of experience in forensic and clinical psychiatry.

Herman: It's really important for your audience, for the people watching us, to know that there are good people doing this work.

Friedman: (points at camera) Talk to them.

Herman: (looking at camera) I just want you to know that there are plenty of good, ethical forensic expert witnesses.

Friedman: (coaching him) Who don't just say what they're coached to say.

Herman: Who do not just say what they want someone to hear them say.

How do Friedman and her colleagues decide which cases to turn into episodes?

"It's just a combination of: Who do we have access to? What is the larger meaning behind this case?" she explained.

"My favorite cases are the ones that are about defenses that I think are outmoded, like the rough sex defense or the gay or trans panic defense," Friedman continued.

Friedman wrote and directed field segments while working as a field producer on "The Daily Show with Jon Stewart" from 2012-15, which she said has been very valuable for her work on "Indefensible."

"And having worked at 'The Daily Show' and done that for a bunch of correspondents and then the show that I did called 'Soft Focus' after that," she said. "'The Daily Show' is like a crash course in film school. For me, it really taught me so much."

One of the most impressive things about "Indefensible" is how Friedman finds ways to inject her dark sense of humor into the show and still show respect for the victims. How much of a psychic toll is working on "Indefensible" taking on Friedman?

"Thanks for asking that, because it is intense, and I was googling second-hand trauma or secondary trauma," Friedman replied.

"After the Tiffany Taylor interview (Ep. 5), I was in New York and I got robbed because I was like in open mode and this homeless woman came up to me," she continued. "It's a longer story, but I just didn't have my defenses up because I had spent the prior day just totally in open mode with Tiffany. It was a good lesson — you've got to leave your work at work."

Friedman also said her "anonymity" has both pros and cons when it comes to covering these tragedies.

"It's really hard," she said. "I feel lucky that I'm so under the radar and nobody knows who I am because for one, I just love anonymity. But then the downside is like when we would go into a 'Daily Show' piece on a dark subject, there would be trust there. People knew Jon. They knew his point of view. They trusted him. Whereas with this project, it's like they don't know who I am for better or for worse. With the defense attorneys, it was great because I could disarm them."

"Do I think that media plays a role in shifting public consciousness? Absolutely," she said. "I always look at LGBTQ rights and how that has shifted in such a positive direction from 'Ellen' and 'Will & Grace,' but this is a tiny show on a streamer no one has."

"But do I think that entertainment can bring people together? Absolutely. Can it raise awareness? For sure. Do I think that the projects that I keep doing on tiny platforms nobody has do anything? No," she continued, laughing.

Friedman said there are talks for a second season of "Indefensible." And she's been working on a feature she hopes to get out there soon.

She has a few other things in the works, as well.

"I'm doing another stand-up special; I'm working on that now," she said. "And I sold a book during the pandemic that I'm writing. It's just a series of essays, and it'll be called 'Not Funny.' I haven't told anyone about it yet except for you."