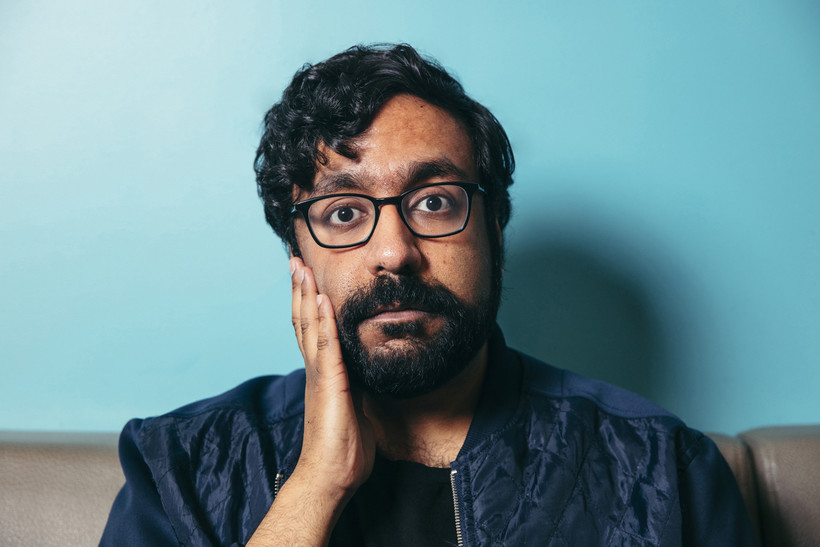 The Iconoclast Has Never Wavered From His Priorities In Forging His Comedic Path
By Adam Friedrich
Share:

Hari Kondabolu is a stand-up comedian, television writer, filmmaker, co-host of several popular podcasts including one with his younger brother Ashok, and the star of the Netflix special, "Warn Your Relatives." Even with all of that proven comedic success, he may not be the funniest person in his own family.

"My mom, definitely for one, always cracks me up and I cite her often as being the funniest person I know. My brother, who I have a podcast with, like I am constantly losing it on stage with him," Kondabolu told WPR’s "BETA."

Would his mom reciprocate the sentiment?

"I don’t know who she thinks is the funniest. I don’t think it’s me; and if it was, she would not admit it," quipped Kondabolu.

Kondabolu may have his mother to credit for his funny bone, but he also pays homage to the "snapping culture" in his native Queens, New York in sharpening his wit. And although he grew up in a diverse environment, it didn’t prevent him from being a target of bullying.

"It was never a fight in the schoolyard or somebody stealing my lunch money," he said. "It was more of a subtle thing. It was being left out of things. It was being made fun of. It was jabs about Apu or curry or stuff like that."

Apu, of course, being the stereotypical and controversial Simpson's character. What was even more frustrating for Kondabolu was the complete lack of representation of fellow south Asians in the media landscape outside of the cartoon convenience store clerk. This forged his desire to take over the narrative through his career as a comic.

In addition to addressing these concerns in his act, Kondabolu has tackled the issue in a pair of films. The first is a mockumentary called "Manoj" where Kondabolu plays an Indian comic who plays up every stereotype for laughs.

"I wanted to make a mockumentary about that mindset and I wanted to contrast that comic with me, Hari Kondabolu. Those aren’t my values," he said. "So, I made that as a way to talk about this frustration without having to make a real serious documentary about stuff."

Twelve years later, Kondabolu would make the "real serious" documentary with the provocative and ultimately effective "The Problem with Apu," which addressed the problematic representation of "The Simpson’s" character and of the dark history of minstrelsy for laughs.

"When you’re given a certain thing and you’re told, 'This is funny,' 'This is normal,' when you see another figure appear who does not at all fit into your ideas of that identity, it’s confusing. And, it’s harder to accept me because you expected Apu," Kondabolu said.

Kondabolu’s comedy was also greatly shaped by the events of 9/11 and his own personal awakening in the aftermath.

"You know, I started looking more into the history of America and started to force myself to be more critical of the things I’m reading and the things I’m taught," he said.

Initially, Kondabolu sidestepped a career in comedy. He instead earned a graduate’s degree in human rights from the London School of Economics.

"I’m a stand-up comic, brown stand-up comic, that talks about race critically and immigration and war. I’m talking about difficult things that make people angry or uncomfortable. So, I have two strikes against me right there," Kondabolu said. "So, I gave up on the idea and I knew that going to grad school and being an immigrant rights organizer, which I was in Seattle, was the best use of my time."

Kondabolu would still dabble in the Seattle comedy scene and was discovered and eventually stumbled into the very career he didn’t think would offer him an opportunity.

"That gave me a sense of faith that maybe things are changing and after grad school it felt like, OK, the door is open, I never thought it would be. I would regret it if I didn’t try," he said.

Kondabolu’s comedy career took off, and he promises to continue to evolve as comic, because he feels it's necessary to being a successful stand-up.

"There should always be some kind of evolution because your life is going to change. You should not rest on your laurels," he said. "I want to share more of my story. What did I go through as a human being. What are my major life experiences with family and relationships. These are universal concepts and ideas that connect to people, but also for each person is very different."

Hari will be performing Wednesday, Nov. 20 at The Plus in Eau Claire, Friday, Nov. 22 and Saturday, Nov. 23 at Comedy On State in Madison and Sunday, Nov. 24 at The Back Room at Colectivo in Milwaukee.