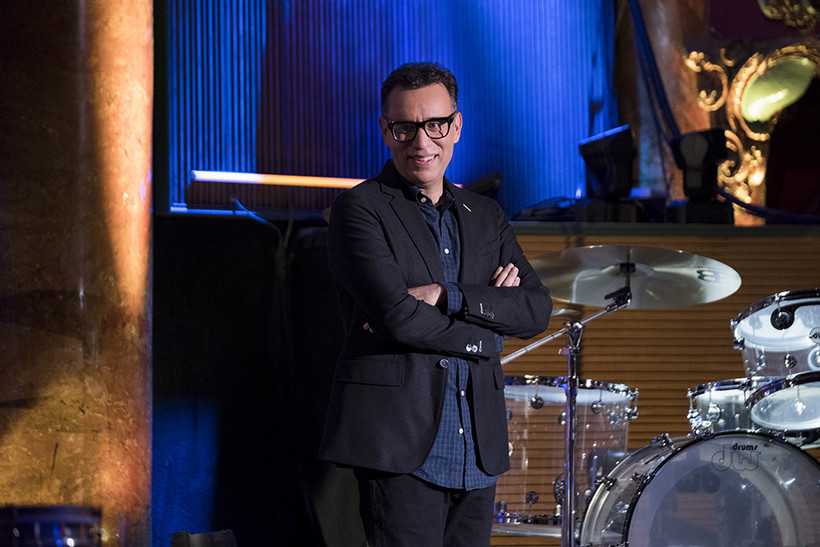 Comedian Fred Armisen Has Always Been Able To Drum Up Laughs

Throughout his storied and prolific career as a comedian, Fred Armisen has always maintained a musical and rhythmic sensibility to his art. That’s not surprising considering he began his entertainment career as a drummer.

Armisen was on the road supporting his new comedy tour, "Comedy for Musicians but Everyone is Welcome" when WPR's "BETA" caught up with him.

Following on the heels of his 2018 Netflix one-hour special," Fred Armisen: Standup for Drummers" the new tour melds Armisen’s two passions of music and comedy into a fresh live experience that could double as an interactive music history class.

The show will feature Armisen highlighting and discussing music he’s discovered and will also focus on his love of punk rock music and punk rock drumming in particular.

"I’m always going to be a punk. I grew up on punk and being a drummer, it’s the crossroads of everything that I love," Armisen said.

In 1988, Armisen left New York to form the Chicago punk rock band, Trenchmouth. He was hoping to follow in the footsteps of his favorite drummer, Blondie’s Clem Burke.

"He really is everything I love about punk rock drumming" Armisen said. "(Clem’s drumming) is theatrical, but not overly theatrical. So, it has just enough shine and glitter to it, but also very, very 4/4."

Armisen’s own drumming was self-described as "frenetic" and has a lot of high end. It has a Latin influence, but still maintains his punk rock passion. That Latin influence stems from Armisen’s years in Brazil as a child.

"That was my first witness to that style and it always stayed with me. To this day, samba music really does affect me and I know my sister feels the same way," he said.

This influence would surface in perhaps one of Armisen’s funniest recurring SNL characters, Fericitio — the Venezuelan nightclub comedian who pumped up his crowd with "frenetic" drumming before rimshotting his own catch phrase, "¡Dios Mio!"

After years of watching peers eclipse Trenchmouth, Armisen soon soured on the music industry. So, in 1998 he took out his frustrations by making a short comedy film mocking the SXSW music festival in Austin, Texas.

"I had a chip on my shoulder, so I thought I’ll make fun of it. I’ll do a video where it’s making light of, if anything, ambition and planning," he said.

Armisen began showing the video at clubs in LA. It became his act in a way. Word began to spread around town and soon Armisen had landed an audition for "Saturday Night Live."

Pivoting to a full time career in comedy didn't mean Armisen had to abandon his identity as a drummer. He was often able to create memorable characters behind the drum set, including the aforementioned Fericito and Mackie – the senile, big band drummer for washed up Vegas lounge act, Buddy Mills (played by Chris Kattan).

"In a way, when I was doing those sketches, I just felt like well 'here’s my version of getting to make a living playing the drums,'" he said.

He was even able to tap into his drumming background when playing non-musical characters. Armisen states that the ability to craft a song and find its rhythms and its arc translates really well when creating a good sketch.

"It’s really very related," Armisen said. "More than anything, my training, not just from drumming, but just from being in a band, there was value to it. I think I did learn a lot about people’s attention spans and being on a stage."

Armisen carried that musical sensibility to his next big project, the IFC sketch comedy-series, "Portlandia." His co-creator was Carrie Brownstein, guitarist for the punk rock giants, Sleater-Kinney.

The long-running series satirized the quirks and tendencies of the Pacific Northwest city and featured numerous musicians along the way including, Eddie Vedder, Jeff Tweedy, Aimee Mann and St. Vincent.

Armisen said that the music scene was always going to be just such a natural evolution of the show.

"There’s also a quality you get to a musician performing in that way that you don’t get with comedians. There’s something a little weirder about it which I liked," he added.

Fred Armisen will be performing "Comedy For Musicians but Everyone Is Welcome" on Saturday, May 18, at the Majestic Theater in Madison, Wisconsin.