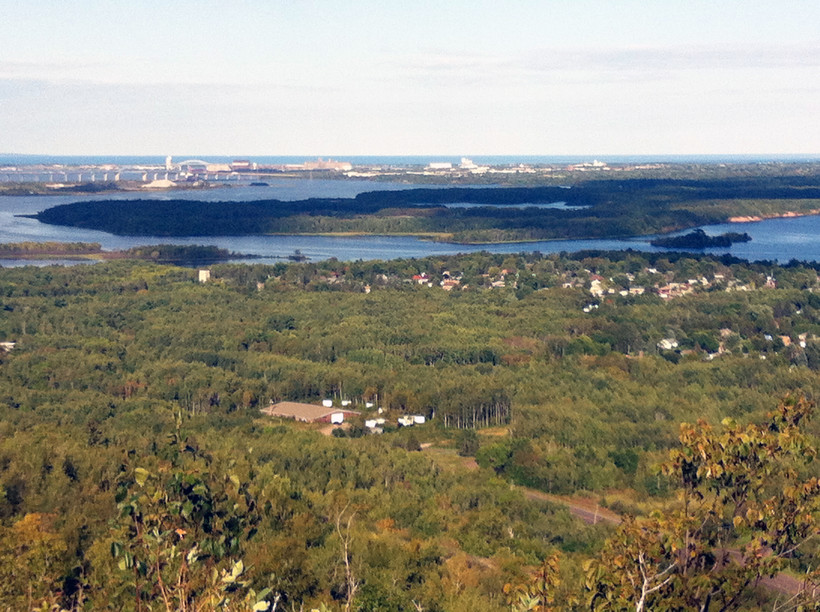 A view of the St. Louis River.

The St. Louis River which drains into Lake Superior is one of dozens of polluted waterways across the country that is considered an "area of concern."

The U.S. and Canada signed the Great Lakes Water Quality Agreement in 1972 to restore and protect the lakes. Since then, the countries have identified 43 polluted sites that needed to be cleaned up. Some have been delisted but others remain.

At 3,600 square miles, the St. Louis River drains into Lake Superior between Duluth and Superior. Over the years, the river has been polluted by contaminants like mercury and other chemicals from surrounding industry. But by the time it was listed as an AOC in 1987, according to environmentalists, the damage had been done.

"People didn’t even want to eat any fish out of the river," said Bill Majewksi, St. Louis River Alliance board chair. "The fish were in many cases disappearing because of the level of pollution. You didn’t want touch the water because it had all kinds of sewage and chemicals and that sort of thing."

The river that had once teemed with lake sturgeon saw the population plummet until there were almost none naturally reproducing in the river.

But since then, steps have been taken to make the picture appear less grim. Standing on a large rock roughly 5 feet wide near the river's Fond du Lac Dam, Daryl Peterson with the Minnesota Land Trust explained that about 600 such rocks were laid across the river to create an environment that encourages lake sturgeon to spawn.

"They’ll come up. They’ll hide behind these rocks until the time is right. Then, they’ll swim up and over the rocks. By swimming over the rocks, it helps them release the eggs," said Peterson

The Fond du Lac Band of Lake Superior Chippewa and natural resource agencies from Minnesota and Wisconsin do surveys every year to gauge the fish species' recovery.

Matt Steiger is coordinating cleanup on the Wisconsin side. He said sturgeon are becoming a success story on the river.

"We are seeing the adult sturgeon in the system. They come up to the spawning areas below the Fond du Lac Dam every spring," Steiger said. "So this has been observed that it is working and what we want to see is that these 2 to 5-year-old fish are surviving in the system. We know that the population then can sustain itself."

Federal, state, tribal and local officials have also been working to restore wild rice along the St. Louis River

Terry Perrault, a natural resource technician for the Fond du Lac band, recently demonstrated a machine that pulls up weeds from the river bottom. He said clearing the area gives wild rice a better chance of growing back. "Wild rice is delicate. It’s not everywhere," Perrault said. "There’s really not a lot of wild rice lakes on for Wisconsin. As far as working together between Wisconsin and Minnesota DNR, it’s still part of the Fond du Lac ceded territory treaty rights so we always have --- putting back into nature and having stuff for tomorrow for our kids. So that’s what’s nice about seeing this come back."

Diane Desotelle coordinates cleanup efforts on the river for Minnesota. She said they’ve been able to do a lot with federal funding through the Great Lakes Restoration Initiative.

"Every two years, we’re wondering if (the initiative) is going to be renewed. Because you never know if those funds are going to be there or not, we’re just going as fast as we can to try to get stuff done," Desotelle said.

More than $1 billion of GLRI money has gone toward roughly 2,100 restoration projects on the Great Lakes, according to a recent government accountability report. The progress that's been made on the St. Louis River so far has put it five years closer to it's targeted delisting as an area of concern in 2025. President Obama proposed a $50 million funding cut for GLRI this year. Wisconsin Republicans and Democrats are calling for that money to be restored to keep the momentum going.