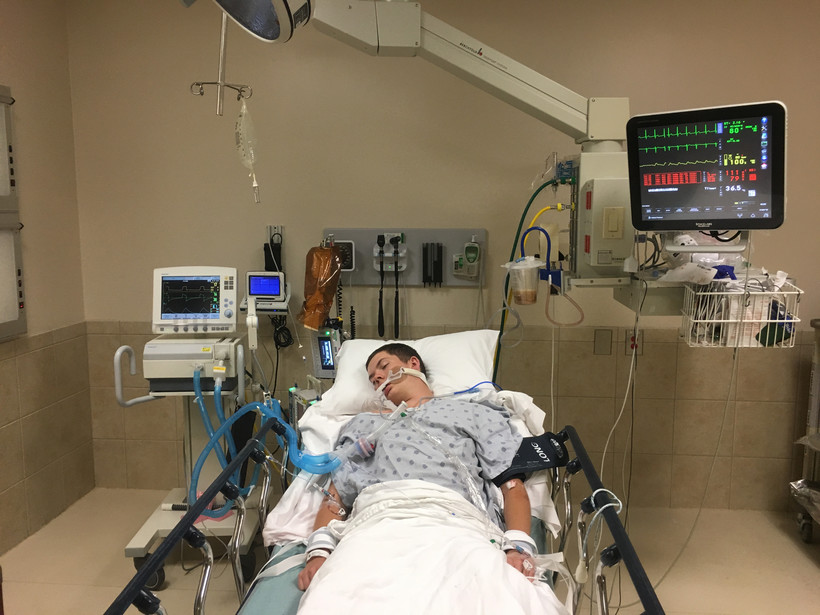 This May 2018, photo provided by Joseph Jenkins shows his son, Jay, in the emergency room of the Lexington Medical Center in Lexington, S.C. Jay Jenkins suffered acute respiratory failure and drifted into a coma, according to his medical records, after he says he vaped a product labeled as a smokable form of the cannabis extract CBD. Joseph Jenkins via AP Photo

Cases Across US Surge To 530 In 38 States, Federal Officials Say
By Shamane Mills
Share:

Cases of serious lung injury apparently associated with e-cigarettes continue to climb rapidly across the nation and in Wisconsin.

There are now 530 confirmed and probable cases in the U.S., according to federal health officials. Wisconsin reports that as of Thursday, there are 48 people with lung damage, which is up from 35 cases last week.

Federal officials described it as a challenging "ongoing outbreak" because it involves so many states — 38 — and officials don't have a brand or substance that they believe might be causing the ailment.

Seven people have died so far. Officials have implored those who use e-cigarettes to take their warnings about vaping seriously — consider not using them at all and don't buy products off the street.

"The e-cigarette or vaping-related lung injuries we've been describing are serious. People are dying," said Anne Schuchat, Centers for Disease Control and Prevention deputy director, during a Thursday call with reporters.

The CDC opened up its Emergency Operations Center earlier this week and on Thursday, the U.S. Food and Drug Administration announced it was activating its law enforcement arm, the Office of Criminal Investigation to address the crisis.

"OCI has special investigative skills and the focus of their work is to identify what is making people sick as well as the supply chain," said Mitch Zeller, director of the FDA Center for Tobacco Products. "Let me be clear: OCI is not pursuing any prosecutions associated with personal use of any controlled substances in these cases."

Federal officials are currently analyzing 150 vaping samples from across the country for THC, opioids, cutting agents, pesticides and toxins along with nicotine.

"We are leaving no stone unturned and are following all potential leads regarding any particular product or compound that may be at issue," said Zeller.