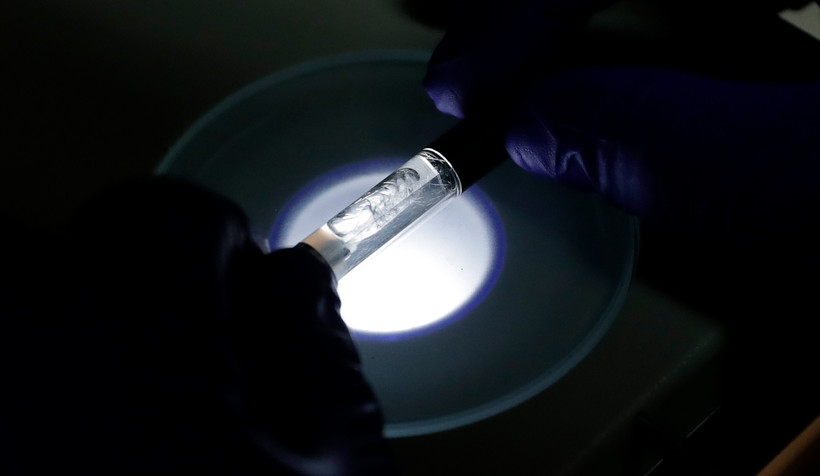 A Yolo! brand CBD vape oil cartridge is examined at Flora Research Laboratories in Grants Pass, Ore., on July 17, 2019. The Associated Press commissioned the lab to test that vape and 29 others as part of an investigation that shows a dark side to the booming industry selling the cannabis extract CBD. Ted Warren/AP Photo

Operation Has Been Going On For Almost 2 Years
By Alana Watson
Share:

The criminal complaint states that Waukesha Police Det. Justin Rowe started the investigation into Tyler Huffhines this summer after being told about the operation from parents and their high school-aged son.

A confidential informant helped with the investigation, providing Rowe with information about Tyler Huffhines, including his social media accounts and suspicious activity. Tyler Huffhines reportedly started manufacturing THC cartridges in hotel rooms and told police in his statement that he started the operation on Jan. 28, 2018.

Tyler Huffhines rented out a condo his mother was managing under a stolen identity — solely for manufacturing and storing the cartridges. When police executed the warrant to search the condo they found more than 31,000 vaping cartridges filled with 1 gram of THC each, 57 mason jars filled with over 1,000 ounces of refined liquid THC and over 98,000 empty cartridges.

The criminal complaint continues stating Tyler paid 10 people $20 an hour to fill cartridges. The operation filled between 4,000 and 5,000 cartridges a day with the illegal substance. Tyler Huffhines told police he got the THC cartridges and THC distillate from California.

The Waukesha County District Attorney's Office is handling the case. The prosecution and defense did not return requests for comment.

The charges come after health officials tied vaping to multiple cases of severe lung disease. Authorities said during a press conference last week that they're investigating to see if the two are linked.