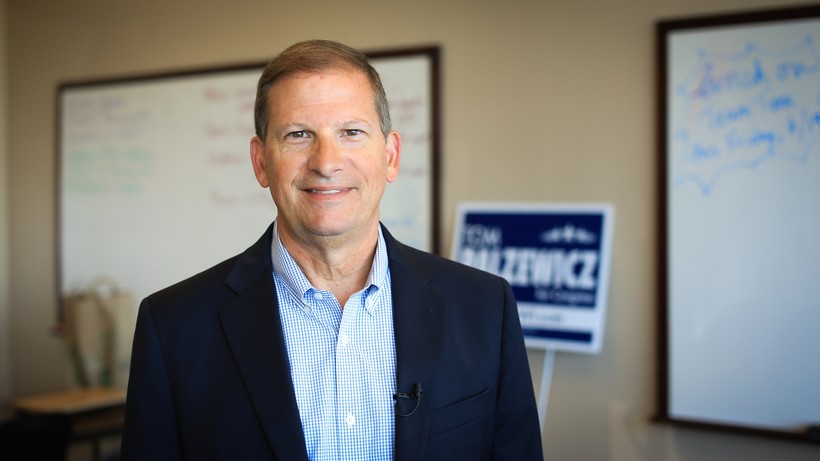 Tom Palzewicz, a Democrat seeking Wisconsin’s 5th Congressional District seat, says it’s time for change after 40 years of Republican Jim Sensenbrenner holding office in the district that includes the north and west suburbs of Milwaukee and parts of Dodge, Waukesha and Milwaukee counties.

Sensenbrenner announced last September he is not seeking reelection.

Rob Ferrett: Why should voters in the 5th choose you to represent them in Washington?

Tom Palzewicz: When I turned 18, Jim Sensenbrenner was my congressman. I'm 58, and he's still my congressman. It's really time for a change in this district. This district cares about health care, solving the pandemic, income inequality, the Black Lives Matter movement, gun violence prevention and the climate. A lot of things need to happen in Washington that haven't been happening and I think it's time to have a Democrat represent us in this district.

RF: Health care is a big issue again in this election, a challenge to the Affordable Care Act coming before the U.S. Supreme Court after Election Day. If it's overturned in its entirety, what would you do to try to start from scratch with a new health care plan?

TP: I'd say that's a big if, but I think there's going to be something happening with the ACA. What needs to happen is we need to move to a universal health care plan.

I've been a business owner for a while, and I've talked to a whole bunch of other business owners. We need to decouple health care from the labor market. It's really holding us back as a country from a competitive standpoint, and it's just not fair to companies and workers. There's so many people who would be starting companies, would move jobs more quickly, would go to get more retraining if health care was covered without having it be covered through a job.

The other part is we need to make sure people with pre-existing conditions are covered, and we need to make sure people have access to affordable care. We should move the Medicare age down to about 50 and strengthen Medicaid. Step No. 1, is get people covered. And step No. 2, let's bring those costs down and get to a more proactive versus a reactive health care system.

RF: What do you think needs to happen at the federal level that isn't happening right now regarding the COVID-19 pandemic?

TP: We need a national mask mandate. It's really going to take a change of leadership. Our president has been consistently saying that there shouldn’t be a federal response to what's happening right now. He's left it up to the states. Our state has taken the same exact idea, and left it up to local officials. We're in the middle of probably the worst outbreak in Wisconsin that we've ever had.

We need national contact tracing, we need testing, we need social distancing. But what we really need is to pass another stimulus bill that makes sure we can bridge the gap for businesses who feel like they have to open, putting not only themselves and their employees, but their customers at risk.

RF: The things you've mentioned so far cost a fair amount of money. Your opponent, Scott Fitzgerald, has cited the national debt as a concern in his campaign. The deficit this year is a record $3 trillion. Do you worry about the ability to pay for all these things?

TP: At this point, it is the last thing we should be thinking about because right now we need to make sure we can get the money into people's hands, so they don’t fall into poverty. Step No. 2 is we'll figure out how to pay for it later. Republicans have over and over again consistently cut taxes and created larger deficits. And there's never a discussion about whether we can pay for tax cuts, but whenever we need to spend money to make sure people don't fall into poverty, there's a discussion about the debt and deficit.

I am a fiscal conservative. I think we do need to figure out ways to balance the budget in economically good times. That is not the position we're in right now, because if we ran a fiscal surplus during good economic times, we'd have the money available to fill the gap during times like now.

RF: How about the issue of police reform? Do you support any kind of federal changes?

TP: It's more than just policing. We have a structural racism issue in our country, and we've had it for a long time. It’s time to start doing something about it.

One of the things I'm very grateful for is Milwaukee County declared racism to be a public health crisis. And they are leading in this effort, there are now a number of other municipalities around the country that are doing the same thing. 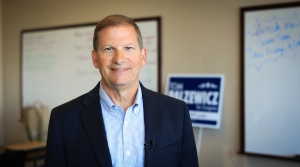 In our series interviews with candidates for the Wisconsin's Congressional seats, we speak with Tom Palzewicz. He is running to represent the Fifth Congressional District in the November 3 general election against Republican Scott Fitzgerald to replace Rep. James Sensenbrenner.