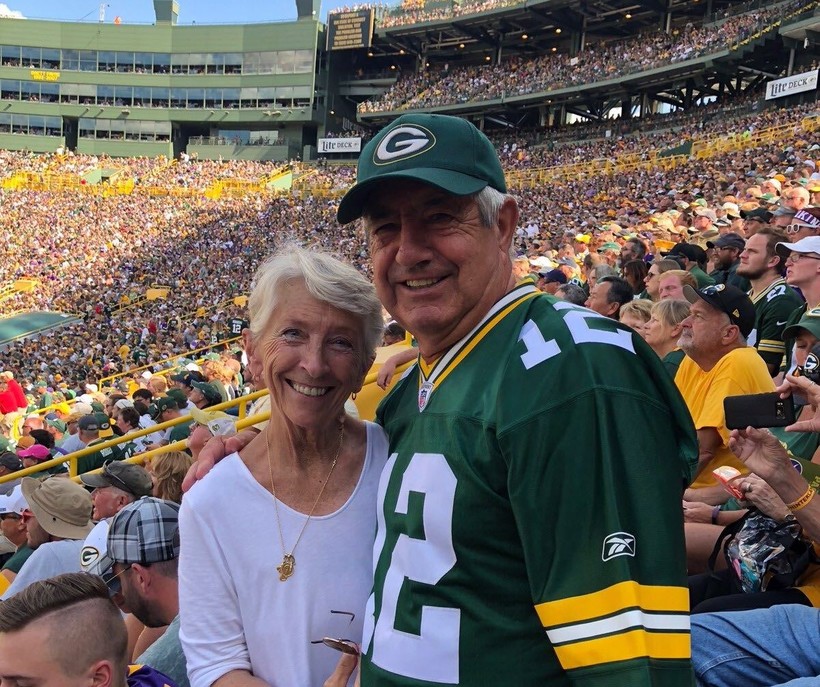 Dianne Smetana and her husband at a Green Bay Packers game. Submitted photo

Some Of The Sickest Patients Are Choosing To Forego Care, Doctors Say
By Corrinne Hess
Share:

People like Dianne Smetana have had to weigh a serious question in recent months: If you have cancer, is it a bigger risk to visit a medical facility during a global pandemic, or to skip the treatment you need?

It's been six years since Smetana woke up from a routine gallbladder surgery, to be informed by her doctor that she had stage-four colon cancer.

"(The doctor) is like, I have good news and bad news," she said. "The good news is, I can deal with that one (cancer). The bad news is, you have another kind of cancer, (also) in the colon."

The 74-year-old Burlington resident fought and prayed through the next six years of treatments. She said she would lie down with her grandchildren and watch movies after invasive chemotherapy treatments. But what started as colon cancer metastasized to uterine, liver and brain cancer.

Smetana said that she'd wanted to give up, but her doctor thought she would be a good candidate for a treatment called immunotherapy that uses a patient’s own immune system to fight the disease. Now, Smetana goes to Froedtert Hospital every three weeks for her treatment. So far, it’s working.

"I just had (treatment) number 33 and I had a scan last week, and I went in and (the doctor's) just like, the scan is beautiful," Smetana said in May.

Smetana went for a treatment at the end of February, just as country was beginning to recognize the new coronavirus as a pandemic. She never considered not continuing her cancer care, but worried she wouldn’t be able to be treated.

"I thought, 'What if they can’t have me?'” she said. "'What if this place is closed up for a while? What if they stopped giving the treatments?' I just kept saying, 'What if, what if?'"

Because of the pandemic, health care providers have tried to limit the number of patients coming into medical facilities. Cancer patients have had to weigh treatment against possibly contracting the virus.

But not everyone can continue. Jennifer Jindrich lives in Madison and has stage four colon cancer that has metastasized to her lungs. Doctors diagnosed her three years ago when she was 44 years old.

"My mom had colon cancer at 54," Jindrich said. "You are supposed to go in 10 years before your parent was diagnosed, but when I went in, it had already metastasized."

When Jindrich was diagnosed, she was given an 11 percent chance of being alive in five years.

"The fact that I’m doing OK at three years is really good," she said.

Jindrich needs regular treatment, a three-and-a-half-hour infusion of chemotherapy every two weeks. But in March, her husband was diagnosed with COVID-19 and hospitalized. Jindrich’s doctors wanted to keep her away from the hospital, and she missed a month of treatment.

"Since then, I’ve been coughing more, which is kind of a sign (tumors) are growing," she said.

Dr. Noelle LoConte is an oncologist at the University of Wisconsin Carbone Cancer Center. She said for some of the sickest cancer patients, the idea of contracting coronavirus is too much to take, and they decide it’s time to stop fighting.

LoConte said she supports her patients’ decisions, but she feels like they have their backs up against the wall.

LoConte said doctors have been trying to make sure patients getting chemotherapy after surgery continue treatment, since it increases their cure rate.

"Where it gets a little muddier is when the chemo would never be curative, but may buy the patient time and control their cancer and keep them in remission," LoConte said.

Jennifer Jindrich went back to the hospital in April and in May she had a scan, to find out how missing a month of treatment had affected her cancer. She was worried and wanted to bring someone with her. But because of the pandemic, she had to go alone.

The results were better than she expected: The scan only showed slight tumor growth.