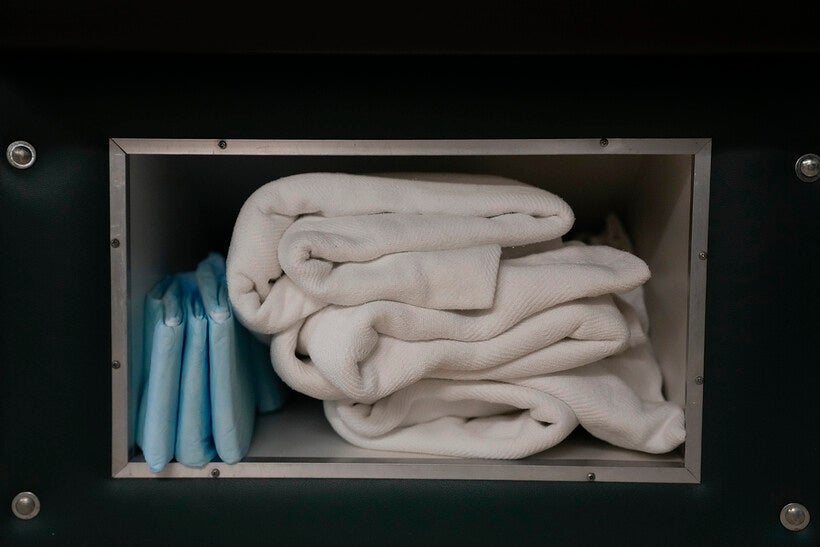 Extra blankets and pads are stored under a bed where women getting abortions rest before and after their procedures, Saturday, Oct. 9, 2021, at Hope Medical Group for Women in Shreveport, La. Rebecca Blackwell/AP Photo

For 30 years, Cheryl Thiede and the other volunteers at Options Fund in Eau Claire have helped people in northwestern Wisconsin access abortions.

With no abortion providers in their region, Thiede said people in her area have to travel to Milwaukee or Madison, or out of state to a clinic in Minneapolis or Duluth.

"In addition to raising funds for the abortion itself, which is about $600 for a first trimester procedure, you're talking about travel costs, possibly child care costs, a day off of work, and then because of the 24-hour waiting period in Wisconsin, there's also two trips," Thiede said. "The cost and the barriers really begin to rise."

She said Options Fund was created to ensure people with lower incomes could still exercise their legal right to an abortion.

But that could change if the U.S. Supreme Court overturns the landmark Roe v. Wade decision, which established a constitutional right to an abortion in 1973. A draft court opinion that would overturn the precedent was leaked last week. If that opinion is finalized, it would immediately reinstate an 173-year-old Wisconsin law that makes providing an abortion illegal.

Thiede said her organization is already prepared in some ways for a post-Roe v. Wade reality because many of the people they help already travel to Minnesota for care. Abortion would still be legal in that state if the federal right is overturned.

"I think we'll see an increase in the demand for financial resources and we likely will need to pivot and think about how to help in other ways, in different ways to really ensure that access," Thiede said.

That includes emotional support for people who are considering or moving forward with an abortion. Even though the procedure has been legal for almost 50 years, Thiede said the stigma around abortion has never gone away. She fears it will only get worse if Roe is overturned.

"It will bring unnecessary shame and more complications, and the fact that you have to cross state lines or cross many state lines to access this medical care does push it further into the dark. And that's the last thing that I would want for a woman making this difficult decision," she said. "So I think it’s good to think about the repercussions and the damage that we're doing to people."

She said her group has also been working with other abortion funds in the region and national advocacy groups to prepare, including looking into grants for legal assistance to make sure their volunteers are protected if helping people to cross state lines.

And Options Fund isn't the only organization in the state that plans to focus their efforts on helping women travel to states where abortions will remain legal if Roe is overturned.

Last week, Planned Parenthood of Wisconsin’s President and CEO Tanya Atkinson said in an interview with Wisconsin Public Radio's "Central Time" that her group would stop providing abortions at their clinics in Wisconsin if the U.S. Supreme Court overturns Roe v. Wade and would shift their focus to supporting women as they travel out of state.

"We would make sure that they could get safely to a state that respects people's ability to make their own health care decisions so they could have a safe and legal abortion. And then we would be there for them when they return back home again to Wisconsin," Atkinson said in the interview.

Lucy Marshall is president of Women’s Medical Fund, Wisconsin’s largest abortion fund which is based in Madison. Her group helps people cover the cost of abortions by giving grants directly to the state’s four abortion clinics, who then make up the difference for individual patients. But if Roe v. Wade is overturned, Marshall said the decision would force the organization to shift how they’re helping people in need.

"We have partnered with clinics outside of Wisconsin where people have already been going for abortions, when it's not possible or not convenient for them in Wisconsin. So we have the models to do it," she said. "The need has already been increasing. There was a 30 percent increase in need for our funding from 2020 to 2021 and we're on track to exceed that significantly. When the financial barriers are added on, of folks who need to travel out of state, that need will increase with the overturning of Roe."

She said Women’s Medical Fund is already finalizing the details of a new partnership with Chicago Abortion Fund to provide logistical help like transportation and hotel stays for Wisconsinites traveling to Illinois. They’re establishing similar partnerships with Minnesota-based groups Our Justice and Just The Pill.

Aside from funding, Marshall said a major concern of a post-Roe v. Wade world is the confusion around how and where people can access an abortion.

She said the leaked draft opinion has already created confusion and emphasized that abortions are currently legal in Wisconsin and across the country and that people should still show up to their appointments and reach out to access support.

Marshall said that confusion will only get worse as the patchwork of abortion laws passed by states go into full effect if the law is overturned.

"I see that also shifting to be a major like center point of our work as an organization is supporting that communication and guidance and care for folks who are worried about being able to access the care that they need," she said.