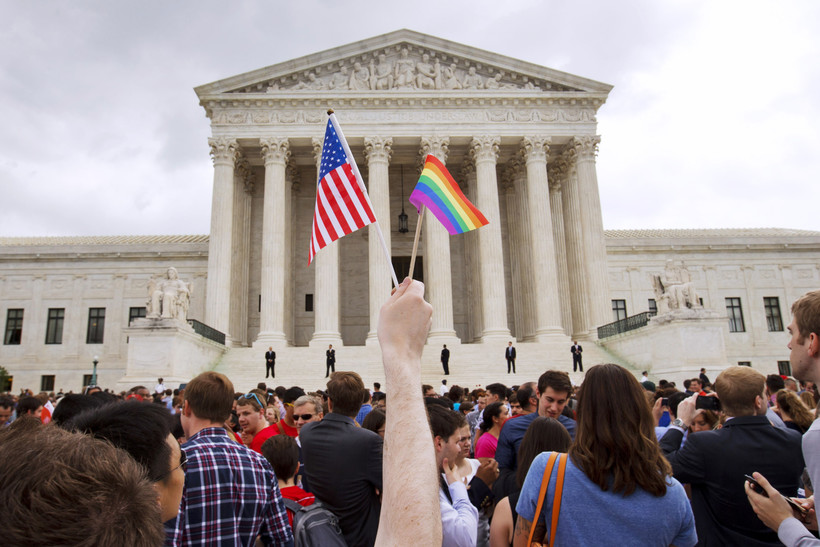 A man holds a U.S. and a rainbow flag outside the Supreme Court in Washington on June 26, 2015, after the court legalized gay marriage nationwide. Jacquelyn Martin/AP Photo

A bill to codify same-sex marriage needs the support of 10 Republicans in the US Senate to overcome a filibuster
By Rob Mentzer
Share:

U.S. Sen. Tammy Baldwin is making a push for the Republican support needed to pass her bill that would codify same-sex marriage before the midterms. But she'll do so without Wisconsin's senior senator, Republican Ron Johnson.

In a new op-ed published in the Washington Post, Baldwin, a Democrat, and Republican U.S. Sen. Susan Collins of Maine said they are "work(ing) across party lines to bring the Senate together and build support for the Respect for Marriage Act," which is designed to protect same-sex and interracial marriages from the risk that the U.S. Supreme Court could overturn its decisions legalizing the unions nationwide.

"The country has been so shocked by the overturning of Roe v. Wade after 49 years since the initial decision," Baldwin said. "People are seriously concerned about the certainty of their marriages."

The Court's gay marriage decision rested on some of the same legal precedent as Roe v. Wade, and in a June concurrence Justice Clarence Thomas wrote that the Supreme Court "should reconsider" it.

The bill to codify same-sex marriage protections passed the House of Representatives in July, but in the Senate it requires the support of 10 Republicans in order to overcome a filibuster. On Wednesday, a Capitol Hill reporter tweeted that Baldwin told him she is "darn close" to securing that support, and "absolutely" wants to see the bill passed before the midterms.

If so, it will be without the support of Johnson. In July, Johnson said he thought the bill was unnecessary because he doubted the Supreme Court would overturn its gay marriage decision. But Johnson also said then that he saw "no reason to oppose it."

In a reversal, Johnson reportedly told a group at an event in Washington County last week that he would not support the bill. The Milwaukee Journal Sentinel reported Wednesday that Johnson said he would not support the bill, and further said that Thomas' legal opinion was "probably right" and the Court's gay marriage decision was decided wrongly. But Johnson maintained that despite this, the Supreme Court would "never" overturn the decision.

Johnson is in a tight race for reelection in the fall. Baldwin was the first openly gay woman elected to the Senate in 2012.