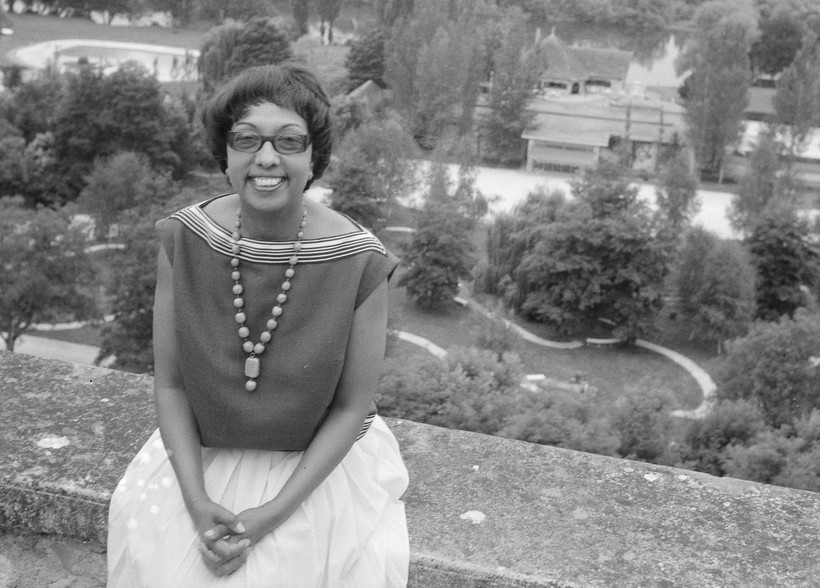 Hanif Abdurraqib On His Book, 'A Little Devil In America: Notes In Praise Of Black Performance'
By Doug Gordon
Share:

In his latest book, "A Little Devil in America: Notes in Praise of Black Performance," author Hanif Abdurraqib explores the ways in which Black performances are an essential part of the history of American culture.

Through a series of essays, Abdurraqib shares incisive and intelligent thoughts about the impact from a diverse roster of performances, including how they affected him personally. Examples of the kind of artists and performances Abdurraqib thought deeply about include the life of entertainer and civil rights activist Josephine Baker; the significant role singer Merry Clayton's powerful and soulful voice played in the success of the Rolling Stones' iconic song, "Gimme Shelter"; and the distinctive qualities that make the Black funeral a different kind of experience.

The book's title comes from a speech Baker gave at the March of Washington in 1963.

"I love the speech for how it's funny, it's defiant, it's somber, but also celebratory," Abdurraqib told WPR's "BETA." "And there's a part of it where she kind of looks upon the younger audience and tells them to go and ask their grandparents about her, and their grandparents will tell them that she was a devil in other countries and a little devil in America, too."

Baker was born in 1906 in St. Louis, Missouri. She became the first Black woman to star in a major movie — the silent film, "Siren of the Tropics," released in 1927. Baker renounced her United States citizenship and became a French national after she married the French industrialist Jean Lion in 1937. During World War II, Baker joined the French Resistance to the Nazi occupation.

"She was a spy, someone who passed the information along and traveled with information because she could use her fame and notoriety," Abdurraqib explained. "But also, just her charm and her ability to manipulate the desires of men in particular to shuttle information back and forth. And that to me is another fascinating and underreported part of her life."

Abdurraqib said he considers this aspect of Baker's life to be underreported because he thinks it's more complicated to consider the "fullness" of Baker's life.

"And it is a lot easier for people to kind of confront her, the image of her, on stage in, say, a banana suit and the bikini of bananas," Abdurraqib said. "Or the picture where she's kind of making playful faces of a tiger, these kind of things."

He said Baker's career off stage is every bit as vital.

"But in her mid- to late life and career, there's still a lot of robust brilliance that is perhaps harder to confront because she was operating in ways that are perhaps less glamorous to talk about," Abdurraqib said.

Baker returned to her hometown of St. Louis to perform at the Kiel Auditorium on Feb. 3, 1952. This was one of the few times she had been back home. She had never performed in her hometown before because she wouldn't perform in front of segregated audiences.

But this concert was for a cause she believed in: a local committee raising money to protest school segregation.

This historic performance is a source of inspiration for Abdurraqib. He said he's fascinated by the idea of having a complicated relationship with home, but still finding yourself feeling compelled to return to it.

"I'm someone who loves where I live and was raised ... and have complications with it, but still love it," he said. "And there's an interesting push and pull that comes with, I think, being Black and loving any place in America. But I especially love Josephine Baker's relationship with St. Louis and her return to America that were not without their complications and not without her comfortably voicing those complications."

Abdurraqib's book reflects on other performers who were overlooked despite their talents or achievements.

The book contains an essay called "I Would Like to Give Merry Clayton Her Roses," in which Abdurraqib explores the important contributions Clayton made to the Rolling Stones' song, "Gimme Shelter," released in 1969. Clayton is a singer who's probably best known for the powerful, soulful and haunting vocals she performed on the track.

The Stones were working on developing the song late into the night. Lead singer Mick Jagger said he suddenly realized the band needed a woman to sing the lyrics he'd written on a piece of paper. One particular line: "rape/ murder/ it's just a shot away."

"He needed someone to sing the word 'murder' like they were trying to squeeze something previous through barbed wire," Abdurraqib wrote.

Producer Jack Nitzsche called Clayton that night, waking her up and convinced her to come to the studio to lay down some vocals.

"Some would consider that she sings backup vocals, but I really think about 'Gimme Shelter' as a Merry Clayton song," Abdurraqib said.

"And during, I think, the second or third rotation of singing that on the second syllable of 'murder,' her voice kind of reaches a really high point and then kind of cracks a bit. And you can hear Jagger giving kind of a shout of awe in the studio, which is on the final record," he said.

What thoughts go through Abdurraqib's mind when he listens to "Gimme Shelter"?

"I have a hard time returning to it because for me, whether intentional or not, the exertion in Merry Clayton's voice is jarring for me and hard to confront. I will say that her version, the version that is just her singing, is actually my preferred version. It feels like she has more autonomy over the movements of the song, and she's not being pushed to heights that suggest discomfort."

Clayton recently released her first new album in more than 25 years. It's called "Beautiful Scars." The title stems from a car accident in 2014. A car crashed into Clayton's vehicle, breaking her legs. This led to the partial amputation of both her legs.

Another one of Abdurraqib's essay, "On Going Home as Performance," looks at the uniqueness of the Black funeral.

When he was 21, Abdurraqib attended a funeral at a church in southern Alabama.

How has his thinking and writing about Black funerals shaped the way Abdurraqib thinks about death?

"It gives me a renewed sense of understanding that when someone is gone, there are still ways to keep them close to us and there are still ways to fight to keep them alive in whatever ways we can. I realize that it is immensely important to not only look at grief and death and loss with sadness, but also to look at it with great gratitude for the fact that someone we love had a life that intersected with our own."