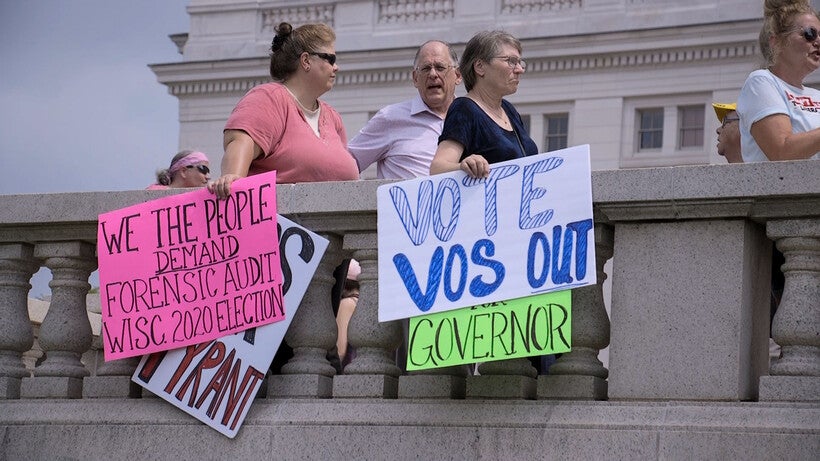 Thousands of protestors gathered at the state Capitol Friday, Aug. 6, 2021, calling on Assembly Speaker Robin Vos to lead a forensic audit of the 2020 presidential election. Will Kenneally/PBS Wisconsin

Thousands of protestors gathered at the state Capitol Friday to call on Republican legislative leaders in Wisconsin to order a forensic audit of the 2020 election, despite the existence of several ongoing investigations across the state into previously debunked claims of election fraud and wrongdoing.

Former President Donald Trump has called for forensic audits across the country similar to what took place earlier this summer in Arizona as he has continued to push false information about the election. A group headed by conservative activist and former Milwaukee County Sheriff David Clarke, a strong supporter of the former president, organized the event. Speaking at the rally, Clarke said Wisconsin's elections processes "resembles that in a banana republic."

"We the people must never surrender our right to scrutinize election results," Clarke said.

Clarke was also sharply critical of state GOP leaders during his speech. Last month, Trump called out Wisconsin Republican leaders, accusing them of "working hard to cover up election corruption." After the comments, Assembly Speaker Robin Vos, R-Rochester, said Trump was "misinformed," but has since said he will put more resources into an investigation of the election he ordered, which is to be overseen by a former conservative state Supreme Court justice.

"It is time for this GOP-controlled Legislature to stand up, to exercise their duty under the constitution and not let some other branch trample all over it," Clarke told the rally crowd, which he also led in a chant of "Vos has gotta go!"

Clarke argued Vos and other state leaders are ignoring the will of the people.

"This is about what you want — not these public rulers. I do not care what they think," he said. "They were sent here to carry out your will, not theirs." 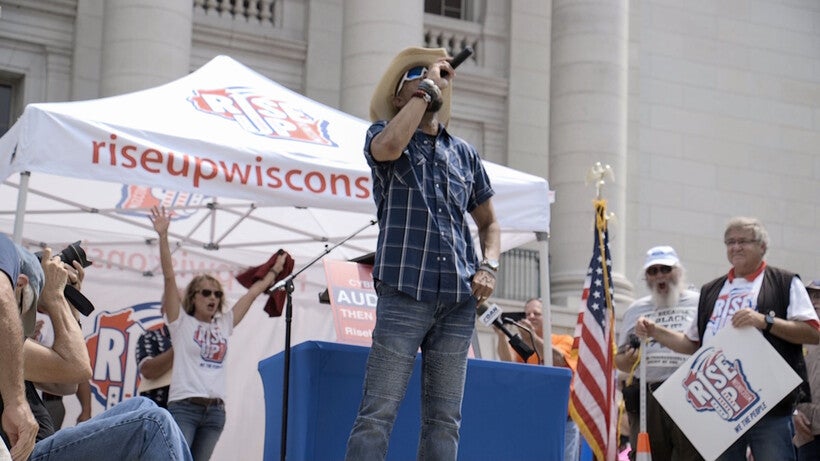 David Clarke, former Milwaukee County Sheriff and president of Rise Up Wisconsin, speaks at an "Audit the Vote" rally at the state Capitol Friday, Aug. 6, 2021. Will Kenneally/PBS Wisconsin

There's a rally now at the state Capitol featuring former Sheriff David Clarke calling on WI legislators to start what they're calling a forensic audit.

State Rep. Janel Brandtjen, R-Menomonee Falls, who chairs the state Assembly's Committee on Campaigns and Elections, also spoke at the rally. The event happened just hours after Brandtjen said she issued subpoenas for election materials in Brown and Milwaukee counties. Brandtjen told attendees she wants to get access to ballots cast in those counties, as well as the voting machines used there, to conduct a forensic-style audit.

"You deserve to know the truth, and it has been a long process," Brandtjen told the crowd. "It is my job as a representative to do oversight ... we are going to fulfill that obligation."

The U.S. Department of Justice warned states earlier this week that audits like the one Brandtjen is pursuing could violate federal law if they turn over materials like ballots to state lawmakers or third parties. 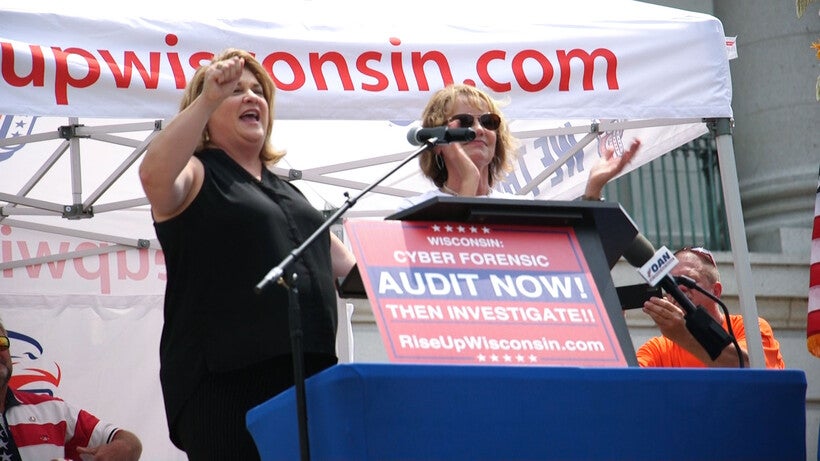 "Enough is enough, we want the truth," Schmude said. "And if we don’t get down to the truth now, my children and grandchildren and generations to come are going to pay the price for it."

Merrell said she has always had the sense that things have been hidden related to the 2020 election. She wants an audit that is "checking for everything, checking for all possibilities of cheating, checking the ballots are on the right paper, that the signatures match and that the machines that counted it aren’t compromised."

"As people of the United States, we the people have the right to know what’s going on in our country," Merrell said.

Random audits of voting machines are already required under state law. Those audits have already taken place, with no problems detected, according to the state elections commission.

Another rally attendee, Terry Brand, said he has concerns with the late-night votes reported from Milwaukee’s central count.

"Transparency doesn’t happen at 2 o’clock in the morning in the dark, when everybody is sleeping," Brand, who is chairman of the Republican Party of Langlade County, said. "We want it transparent and out in the open, so we can all witness how they counted the votes and which votes were legal."

Election officials warned voters for several weeks ahead of the election that counting in some more populous communities like Milwaukee would likely last until the wee hours of the morning after Election Day.

Sandy, who attended with several friends and didn't want her last name identified, said she doesn't believe another election review should be a "one-sided issue."

"Everybody should be concerned of whether or not our elections are fair," she said. "I don’t see why anybody would not want transparency in our elections. If nothing was wrong with the elections, then why can’t we see it?"

A presidential recount of Milwaukee and Dane counties conducted last year resulted in few votes being changed. Additionally, several lawsuits brought by Republicans in Wisconsin seeking to question or overturn results have all been unsuccessful. According to official results, President Joe Biden won Wisconsin by about 21,000 votes — a margin similar to several other razor-thin statewide elections in recent years.