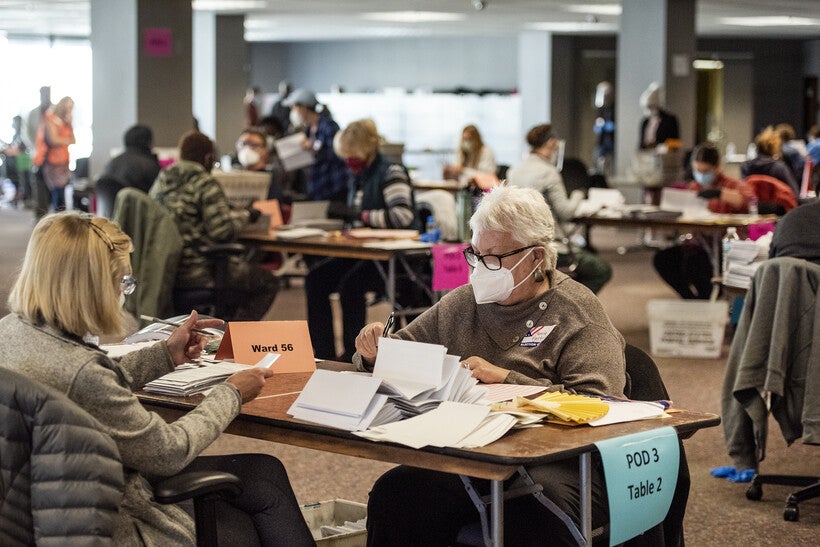 With record-breaking numbers of absentee ballots to tally, Wisconsin election officials are warning voters that reporting election results this year may take a little longer and look a little different than people are used to.

On a Monday call with reporters, Meagan Wolfe, the head of the Wisconsin Elections Commission, said the later-than-usual reporting times shouldn't be cause for concern.

"If unofficial results aren’t available until the next morning, it does not mean that something went wrong," Wolfe said. "It means that election officials are doing their jobs, and their job is to make sure that every valid ballot gets counted."

According to the Wisconsin Elections Commission, about 1.9 million people in Wisconsin returned an absentee ballot as of Monday morning. That’s more than double the number of absentee ballots cast in 2016.

Absentee ballots take longer to process than ballots cast in person on Election Day. That’s because absentee ballot envelopes need to be checked against poll books and checked for voter signature, voter address and witness signature requirements before they’re opened. After they’re unsealed, ballots must be smoothed out before they’re fed into tabulating machines. If any ballots are damaged or the machine won’t accept them because they’re too rumpled or creased, the ballot will need to be re-created by poll workers in a time-consuming process dictated by state law.

Poll workers can begin processing absentee ballots as soon as polls open at 7 a.m. Election Day, but not before.

There are two main ways absentee ballots will be processed on Election Day across Wisconsin: either at polling places scattered across a community or at one "central count" location in the community.

Here’s what processing — and reporting unofficial results — will look like.

According to the Wisconsin Elections Commission, 1,811 municipalities across Wisconsin will process absentee ballots at polling places. That means ballots cast early by voters, either through the mail or in person, will be transported to that voter’s regular polling place to be counted on Election Day.

Poll workers will process those absentee ballots all day long as other voters come to the polling place to cast their ballots in person. The absentee ballot processing will be in plain view, so election observers may watch the process play out.

Madison, the second largest city in Wisconsin, is one of the 1,811 communities that process ballots at polling places on Election Day.

According to a press release from the Madison City Clerk’s office last week, polling places across the city will have "anywhere from 300 to 3,900 absentee ballots to process on (Election Day)."

According to the Wisconsin Elections Commission, municipal clerks must report those vote totals, called "unofficial results," to the county clerk within two hours of the results being tabulated, and county clerks must post the results to their website within two hours of receiving them from the municipal clerk. Election results are always "unofficial" on election night. Results don't become official until municipal, county and state-level certifications are complete. Those typically take a few weeks after Election Day.

A list of county clerk websites may be found here.

In 39 communities across Wisconsin, absentee ballots will be processed and counted at a "central count" location. No in-person voting will take place at these locations.

Milwaukee, the largest city in the state, is one of those "central count" communities, and workers there will process a hefty number of ballots beginning at 7 a.m. Election Day. According to the Wisconsin Elections Commission, 163,186 absentee ballots had been returned in Milwaukee as of Monday morning. That means more than half of the city’s 317,957 registered voters cast absentee ballots.

State law doesn’t allow poll workers to stop processing ballots once they begin, so central count facilities across the state are expected to work into the wee hours of Wednesday morning to finish their time-consuming absentee ballot counts.

On a call with reporters Monday, Milwaukee County Clerk George Christenson said he believes Milwaukee’s central count location will be processing absentee ballots until between 3 a.m. and 6 a.m. Wednesday.

Christenson urged people to be patient as they await results.

"Elections are about getting things right, not getting things fast," Christenson said. "And that’s what’s important. We want the media and the public to know that it’s important to make sure everything is reported correctly, accurately, and timely. And we ask people for patience."

Aside from Milwaukee, other central count locations include the state’s third largest city, Green Bay, as well as the cities of Kenosha, Beloit and Janesville, among others.

A list of every central count community in Wisconsin can be found here.

Each absentee vote will be added to the in-person vote total in each individual absentee voter’s ward, as if they had cast their ballot in person.

The late night or early morning surge of ballots reported from central count locations across Wisconsin may catch some people off guard, but it is entirely normal and expected.

It is also important to note polls have shown Democrats are much more likely than Republicans to vote early, so absentee ballot vote totals reported from central count locations are likely to skew heavily Democratic and may alter a municipality’s results significantly.

The Wisconsin Elections Commission does not provide a centralized location for statewide vote totals on election night.

If a voter doesn’t want to check county clerks’ websites for unofficial election night results in all of Wisconsin’s 72 counties periodically throughout the evening and add them up, the Associated Press provides that service for readers and a number of its media partners, including National Public Radio and Wisconsin Public Radio.

WPR will include Associated Press unofficial vote totals for Wisconsin, which will be updated as clerks update their websites across the state throughout the night, on its website on election night.