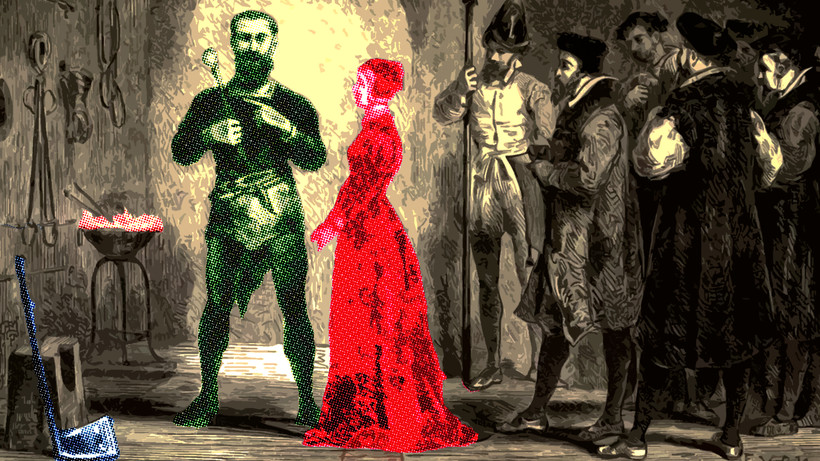 The hangman of Stuttgart shows Kepler's mother instruments of torture.

Are you now, or have you ever been, a witch? The witch hunt of Kepler's mother

Author Rivka Galchen on her historical novel 'Everyone Knows Your Mother is a Witch'
By Shannon Henry Kleiber
Share:

In 17th century Germany, the mother of famed astronomer Johannes Kepler, Katharina Kepler, was accused of being a witch.

Neighbors and people in her town said Katharina, an herbalist, was practicing dark magic, putting spells on people and animals and even poisoning someone. The accusations piled up, and she was put on trial for witchcraft.

Centuries later, author Rivka Galchen has taken this story, including material from Katharina’s trial, and spun it into fiction, leaving the reader wondering if Katharina was really a witch and thinking about what magic means in our lives.

Anne Strainchamps spoke to Galchen about her novel for "To the Best of Our Knowledge."

This transcript was edited for clarity and length.

Anne Strainchamps: Who was Katharina Kepler?

Rivka Galchen: Katharina Kepler was the mother of Johannes Kepler, the great mathematician and astronomer.

Katharina was a woman who raised her children all by herself with very little money. At the time that she was accused of being a witch, she was one of the oldest women in the town. Her son, who had just gone to the same local school as the other kids, was somehow the imperial mathematician. Her other children were doing well. They had all sort of moved up in the world, so she was in that sense, a startling or unusual figure.

AS: When I heard that you had written a novel about how the mother of Johannes Kepler, one of the key figures in the Scientific Revolution, was tried for witchcraft, I thought, this is such a brilliant premise for a novel. But it never occurred to me that it was actually true. How did you first come across the story?

RG: It is quite shocking that it's actually a true story. And in fact, it's a story that again and again was expurgated from the record because it was so shameful.

One thing I found interesting about the trial of Katharina Kepler was that I myself reading about her in the 21st century was reading as if I might find out, was she a witch or wasn't she? That was the tension in my mind, and I thought, 'Well, that is so psychologically interesting.' Just the nature of accusation opens up the space for guilt, even when it doesn't make any sense anymore.

AS: What was she actually accused of?

RG: The central accusation was that there was a woman in town, and the historical record seems to suggest that she was probably suffering from some sort of neurologic disease. She was convinced she had been given a bitter drink by Katharina and that she'd been given a poison. Katharina herself seems to feel that one of her wines had soured and it was a mistake.

But then, once the idea was out there in the town, it just kind of went everywhere. And so she was accused of passing through doors that were locked. She was accused of looking at a pig and making that pig lame. She was accused of making a cow sick. And the evidence would be that she walked by that cow every day. And it just sort of opened up all the anxiety that different people in the town had about, frankly, all the terrible things that were happening to them. You know, babies dying, other people dying painful deaths and unexpected deaths, mysterious deaths, the livestock and their livelihood being affected somehow just open this channel and they found a place to send all these anxieties.

AS: So I completely get being just fascinated by the story and the history and wanting to dig into it. But what made you want to then go from doing the research to actually writing a novel, bringing Katharina herself to life?

RG: There was something, you know, and it's hard to describe, it feels kind of mystical, but there was something about this woman's story that for me, it transmitted across time and space. I felt very close to her, even though that's a fantasy and I don't know, it seems like a voice I was interested in. And there are these remarkable moments when you read the trial. And one thing that's wonderful about Katharina having had this famous son and Germany being in love with keeping very accurate records, is the records of the trial were available.

AS: Did she say much?

RG: The way the trial works is women (accused of witchcraft) would be asked to publicly display how much they regretted the harm they had caused. If they cried in public or showed the judges that they felt remorse, their sentence would be mitigated or pity would be shown to them. Of course, it's a bargain. So they're asking her to cry. And there's also the record of her simply saying, "I've cried so many tears in my life. I just don't have any left."

AS: So she wouldn't cry.

RG: She wouldn't cry. I almost feel like there was a ray of incurable sincerity there. Under that much duress, I would fake anything I had to do (to save myself).

AS: What was at stake, what would they have done?

RG: It's genuinely so grotesque and horrifying. They were burned, or they had gunpowder put on their necks so that they would be exploded. They were put on racks, they were stretched, they had thumbscrews. It was quite common for women to go to an expert to find out if maybe they were a witch and just didn't know about it. And that also, I think, is like a quite amazing form of violence into one's own belief about oneself.

AS: All the people who are accusing her are people who know her or who have seen her every day for years and years in this small town, and they know the horrific things that could happen to her. And yet they seem almost blithe about it. It's just the intimacy of the cruelty that's so chilling.

AS: Almost all witchcraft I’ve heard of is very Earth-based. All the rituals are about connecting with the natural world. And so I'm thinking back to this period of time and the irony of its being Johannes Kepler's mother who's accused of being a witch and the beginning of the scientific revolution, when a whole new level of rational abstraction was being birthed. Which would lead to things like the industrial revolution and our continuing march away from being part of the natural world.

RG: That’s so interesting, and it's a funny moment in time because it actually is the peasants and the women who have developed — mostly through an oral tradition — a tremendous and very accurate knowledge about herbs and plants and treatments and medicine. It was like an experiential, evidence-based kind of research project that had been going on for hundreds and hundreds, if not thousands, of years, and it was not an exclusively feminine project, but a particularly feminine project.

And then there is this weird transition where they're quote unquote casting out superstitious beliefs, but also weirdly casting shade on what was foundational knowledge that wasn't superstitious.

AS: But it's also a period of time when what we think of as modern medicine is just starting up and men are taking it over. And so there's also this kind of gendered "who are the healers" thing going on.

RG: You can see men who were trying to make their living as a doctor and who found these alternative basically cheaper practitioners, women, threatening. And so it was as if they had to be discarded completely and had to have all this shade cast on them.

AS: It's so interesting to me that after all these centuries, just the word "witch" still has so much power.

RG: Yeah, it is shocking and everyone's trying to use that power because it summarizes something for people.

AS: Well, thank you so much for bringing Katharina back to life.