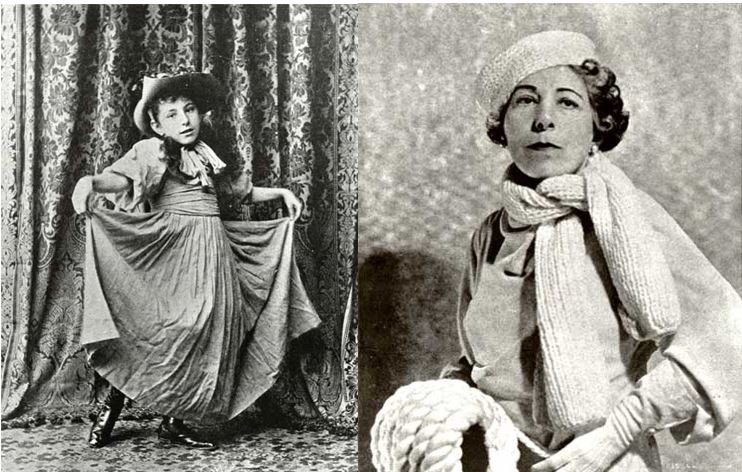 Edna Ferber was a "stage struck" 7-year-old, left, and as adult in 1936. The photos are included in Ferber's autobiography, "A Peculiar Treasure."

Called "the greatest American woman novelist of her day," Pulitzer Prize winning novelist and playwright Edna Ferber was born this week in 1885.

Ferber was born Aug. 15, 1885  in Kalamazoo, Michigan. Her family moved around a bit before settling in Appleton, Wisconsin, when Ferber was 12 years old, where her father ran a general store.

She attended Ryan High School where she served as "personal and local" editor of the school newspaper. Her writing talents were already apparent, though it was the theater that captured her heart. She called herself "stage-struck" and she hoped to become an actress.

But it wasn't meant to be. Unable to afford college and needing to help support her family, Ferber went to work at the Appleton Daily Crescent. She was newspaper’s first female reporter. Ferber loved the work and moved on to a bigger paper, the Milwaukee Journal, where she worked so hard she collapsed from exhaustion one day at age 22.

Ferber came home to Appleton to rest, but in typical Ferber fashion, she poured her energy into writing stories.

Her first short story, "The Homely Heroine," was published in 1910. She later said of her success: "My decision to send 'The Homely Heroine' to the editor of Everybody’s was arrived at simply enough. It happened to be the one magazine on the living-room table. Its address was printed on the index page. Off went the story, badly typed and minus return postage."

Her story was soon followed by a novel, "Dawn O’Hara," about a female journalist in Milwaukee. Ferber came to national attention for her series of stories about traveling petticoat saleswoman Emma McChesney. Among her fans was President Teddy Roosevelt.

The success of these stories brought Ferber in 1912 to New York, where she found great fame for her novels and short stories. Many of her stories featured strong women overcoming difficulties. She was said to have little patience for women who let themselves be limited by the social and cultural constraints placed on women.

Ferber was rigorous about her work. She researched the settings of her novels thoroughly and kept a daily schedule of a brisk morning walk followed by several hours of writing. For years, she wrote 1,000 words a day, 350 days a year. Once a book had been started, she claimed nothing but death could separate her from it.

"Clothes are unimportant. Teeth go unfilled. Your idea of bliss is to wake up on a Monday morning knowing that you haven’t a single engagement for the entire week," described Ferber. "You are cradled in a white paper cocoon tied up with typewriter ribbon."

Her 1924 novel "So Big" won the Pulitzer Prize. The following year, in 1925, she published her best known work "Show Boat," which was later adapted into a musical. Several of Ferber’s works were made into plays and movies, including "Cimarron," which won an Academy Award for Best Picture in 1931.

Ferber never married. She did not see marriage as part of her plan because she did not see how she could be a good writer and a good mother at the same time.