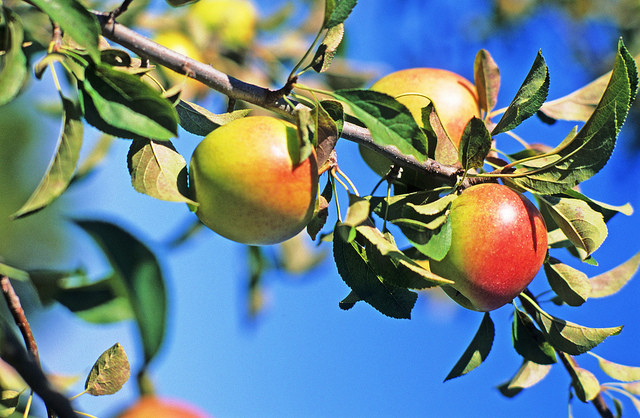 Apples: A Simple Fruit With A Complex Backstory

Apple enthusiast Susan Futrell says we take apples for granted. But we shouldn't.

"I think that they’re so common that it's easy to forget all of the amazing effort and care and botany that goes into producing that fruit. It’s a year-long process," Futrell said.

"They're common, they're familiar. These days you can buy them all year round, but there is something wonderful about apples and also the people who grow them. It's about as simple as food gets. There's nothing in between you and the experience and the fruit," said Futrell, author of "Good Apples: Behind Every Bite."

But, as Futrell documents in her book, the cultivation and marketing of apples is anything but simple.

In writing the book, Futrell spent a lot of time with apple growers, pickers, marketers and scientists across the country. Along the way, she realized that farming and food production is "a common good."

"It’s something that farmers and the people who pick food and support agriculture … are providing to the rest of us," she said. "We get so used to thinking of it as something that we're owed. You go to the grocery or the restaurant and you expect to be fed. Yet it takes such an amazing combination of determination and knowledge and land. We all as eaters and citizens have some responsibility to support a community of farmers."

Apples are able to grow in every state, and the apple industry once spread across the country, Futrell said. Today, small-scale agriculture and the surge of interest in locally grown, sustainable food is reviving the “idea that many different kinds of fruits and vegetables can be grown everywhere,” said Futrell.

While Washington state dominates the apple industry, growing about two-thirds of the apples consumed in the U.S. each year, Wisconsin has a robust apple-growing economy, as well. The state’s commercial orchards produce about 54 million pounds of fruit annually.

Futrell says her immersive journey into the world of apples began with a failed bid to buy the oldest commercial apple orchard in Iowa, her home state. The orchard, in the same family for five generations, took home the blue ribbon for its heirloom apples at an Iowa State Fair contest she organized. But a few years later, the farm was being sold at auction to settle a family dispute.

“Something as deeply rooted in a place shouldn't be allowed to disappear and become a housing development called ‘Orchard Acres’ or whatever,” Futrell quipped.

In hindsight, she was glad to lose the auction, but has held on to the reasons she wanted to buy it in the first place.

“Mention apples to almost anyone, and you’ll prompt a story, the name of a favorite variety, a recommendation about where to pick them, or a promise to introduce a friend who has worked in or owns an orchard,” Futrell writes in her book. “On the night of the auction, I felt like I was trying to hold on to all of that. There was more at stake than a small orchard in an out-of-the-way part of a flyover state. It was about the soul of something -- me, the land, the country."