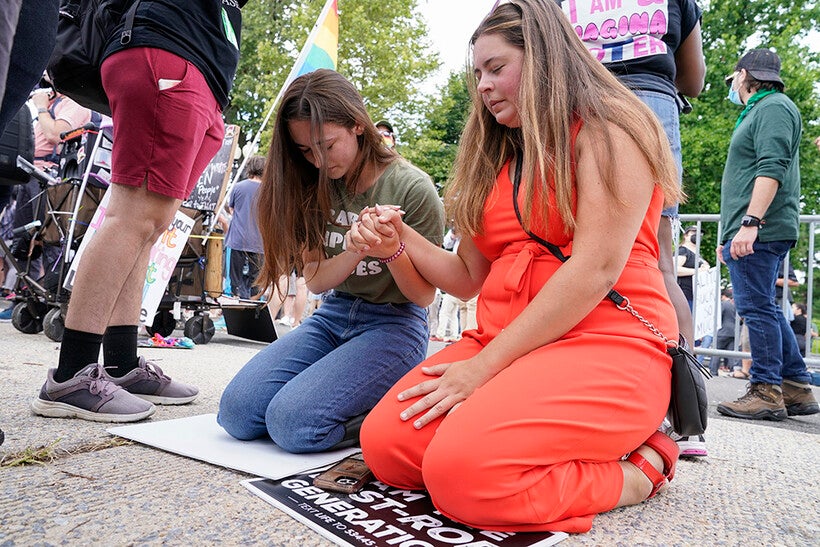 The groups want to change a provision in the ban that allows abortions to save the life of a mother
By Shawn Johnson
Share:

Some of Wisconsin's anti-abortion groups want to tighten the state's pre-Civil War ban on abortions by removing or rewording the exception that allows doctors to perform the procedure to save the life of the mother.

The push comes as opponents of the ban, led by Gov. Tony Evers and Attorney General Josh Kaul, have filed a lawsuit seeking to block the law in its entirety, arguing it's out-of-date and unenforceable.

Both Pro-Life Wisconsin and Wisconsin Family Action are calling on lawmakers to pass a so-called personhood amendment to ban abortion in the state constitution.

Another anti-abortion group, Wisconsin Right to Life, argues the focus in a post-Roe world should be on defending Wisconsin's 1849 ban and funding pregnancy resource centers.

None of the groups want to add new exceptions to the law for victims of rape or incest, a step favored by Assembly Speaker Robin Vos, R-Rochester.

Here's a rundown of some issues anti-abortion groups plan to push in Wisconsin.

Removing, changing exception for life of a mother

Wisconsin's long-dormant abortion ban, which dates back to 1849, makes performing an abortion a felony, but with a notable exception. Abortions are permitted under the law when deemed "necessary, or is advised by 2 other physicians as necessary, to save the life of the mother."

It's that language that Pro-Life Wisconsin and Wisconsin Family Action want to change.

"The only thing that we're concerned about — and it is a big concern — is there is a broad and undefined 'life of the mother' exception that we would like to eliminate," said Pro-Life Wisconsin executive director Matt Sande. "We would like to replace it with language requiring equal care for mother and child."

Wisconsin Family Action president Julaine Appling said ideally, her group would like the current "life of the mother" exception eliminated.

"In a perfect world, we are not a group that thinks that exceptions are necessary or good," Appling said. "We think at a minimum it has to be more clearly defined."

Wisconsin Right to Life legislative director Gracie Skogman said her organization opposes removing the exception and thinks it's important to have medical emergency language in the law.

"So that it is crystal clear that if there is a mother who is facing a medical emergency that she is able to get the care that she needs," Skogman said.

Mike Murray, the vice president of public affairs for Planned Parenthood of Wisconsin, called it "callous and disheartening" to call for the removal of the "life of the mother" exception.

"For there to not even be an exception to ensure that physicians and other health care professionals can tend to the health and safety and well-being of their patients is unconscionable," Murray said.

Both Pro-Life Wisconsin and Wisconsin Family Action also support amending the Wisconsin Constitution to ban abortions through a so-called personhood amendment that would give the rights of life, liberty and the pursuit of happiness to a "human being at any stage of development."

Sande said his concern is that if conservatives lose the 2023 Wisconsin Supreme Court election, liberal justices would gain a majority on the court and could rule against abortion laws.

"If we lose that in 2023, we believe that a 'left' Supreme Court will work to find a substantive due process right to abortion," Sande said.

"We need to get to the point where we recognize the personhood of everyone from the moment of conception," Appling said.

"We do not think that that is the best or most effective way to save lives here in Wisconsin," Skogman said.

GOP lawmakers last pushed such an amendment in 2020, though the plan never received a vote in the full Legislature. It would need to pass two consecutive sessions of the Legislature and be approved by voters in a statewide election in order to take effect.

Murray thinks the proposal would be overwhelmingly opposed by the people of Wisconsin.

"I think that proposal is an even more extreme version of Wisconsin's criminal abortion ban," Murray said.

Skogman said Wisconsin Right to Life's focus is on helping women who find themselves in a challenging or unexpected pregnancy.

"To ensure that our pregnancy resource centers are fully equipped and funded and able to provide services to women to ensure that if there are housing concerns, maternal health care, all of those concerns, we want to make sure that they are met for women here in Wisconsin," Skogman said.

Skogman said that could include pushing for more public funding of pregnancy resource centers.

"We've already started having some of those conversations in the last couple of weeks and especially this week," Skogman said.

Appling said she's open to the idea of additional public funding for pregnancy resource centers, but she doesn't want to place new requirements on many of the faith-based groups that run the facilities.

"What we don't want to see happen is any of that money come with strings that would tie the hands of the pregnancy resource centers in any way, shape, or form," Appling said.

Shortly after the leak of the draft opinion that would eventually overturn Roe v. Wade, Vos said he'd like to see new exceptions for rape or incest added to Wisconsin's abortion ban.

But asked Tuesday whether they'd favor such a step, Wisconsin's anti-abortion groups said no.

"That is absolutely not something that we would support," said Skogman.

"We would strongly, strongly resist that," said Sande.

"No, that's definitely not necessary," Appling said. "The situation surrounding the conception of a new human being does not in any way, shape or form diminish the worth, the value, the dignity inherently of that new human being."

All three anti-abortion groups were also united in their support for defending Wisconsin's 1849 abortion ban against the lawsuit filed by Kaul and Evers.

Planned Parenthood strongly supports the lawsuit, but at least for now, the group is operating as though the ban is in effect.

"Out of an abundance of caution we have paused providing abortion services in the state of Wisconsin until we can get clarification from a court of competent jurisdiction, that the criminal abortion ban is not enforceable," Murray said.

Whether or not the law is enforceable in the short term could fall to the Wisconsin Supreme Court, which is currently split 4-3 between conservatives and liberals. Conservative swing Justice Brian Hagedorn, who has sided frequently with the court's liberals, once wrote in a blog as a law school student in 2005 that he hated Planned Parenthood, calling it a "wicked organization."

In the longer term, whether the ban is enforced could depend not only on who wins next year's Wisconsin Supreme Court race but on who wins this year's elections for governor and attorney general.

Kaul has vowed not to enforce the ban and Evers has pledged to grant clemency to anyone charged with violating it. The Republicans running for governor, meanwhile, have said they support the ban, and three of them said they'd remove district attorneys who don't enforce it.