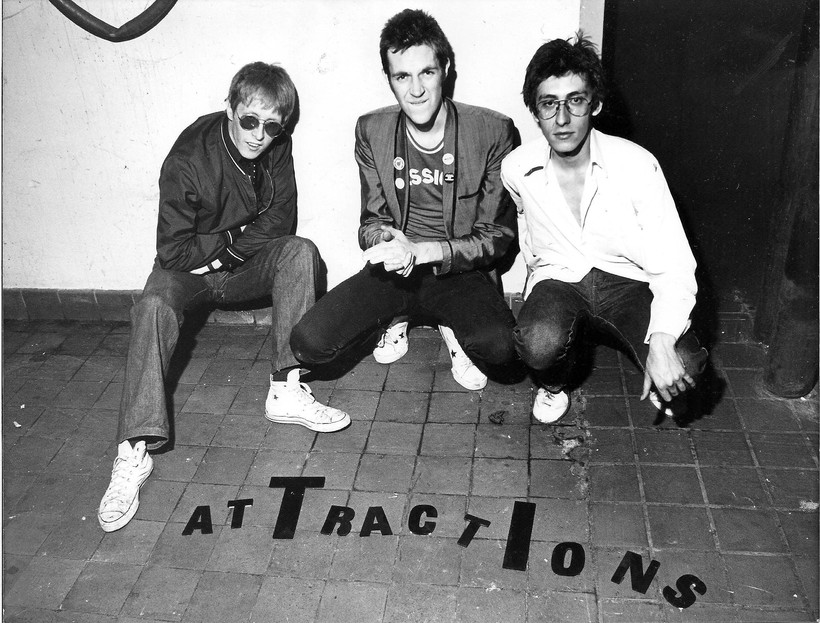 All About That Bass: Bruce Thomas On Playing With Elvis Costello

Thomas Reflects On His Career As A Member Of The Attractions In His Memoir, 'Rough Notes'
By Doug Gordon
Share:

Elvis Costello emerged on the music scene as part of the punk/new wave music revolution that exploded during the mid-1970s. His backing band, The Attractions, was a huge part of Costello's sound and his success.

Bassist Bruce Thomas, drummer Pete Thomas (no relation) and keyboard player Steve Nieve had the music chops and the propulsive energy to provide the perfect accompaniment no matter the genre — rock, soul and country — you name it.

Bruce Thomas is the author of a memoir called "Rough Notes: Dancing About Architecture." In the book, Thomas reminisces about working with Paul McCartney and touring on Elton John's private jet. And, of course, he revisits his time as a member of The Attractions.

In the late 1970s, Thomas spotted an advertisement in the popular British music magazine Melody Maker for a bass player for an unnamed musical artist. He had a pretty good idea of who the artist was.

"The London music scene wasn't, like, huge," Thomas told WPR's "BETA." "It was in the days of pop, rock and all that kind of thing. Pretty much everybody knew what was going on on the grapevine, as it were. So when the advert came out, I had an idea it was this guy Elvis Costello, making a few waves."

Thomas said Costello didn't want him to audition because Costello thought Thomas was too old school since Thomas had already been in bands and Costello was going for something new.

"When he asked who my favorite band was via the woman that answered the phone, I said, 'Steely Dan,' and I heard this voice at the other end saying, 'Get rid of him, get rid of him,' and the woman say, 'No, he sounds OK,''' Thomas recalled.

So Thomas bought the Costello records that were out at the time. He learned the songs and went to the audition in a South London rehearsal studio where he pretended he was hearing the songs for the first time. Even though the audition went well, Thomas thought Costello still wasn't keen on him.

It was drummer Pete Thomas who convinced Costello that Bruce Thomas was the right guy to play bass. And Thomas ended up marrying the girl who answered the phone.

Thomas said the first time he played with his fellow Attractions, "it clicked straight away. It was pretty instant."

The Attractions made their debut on Costello's second album, "This Year's Model," which was released in March 1978. One of the standout tracks is "Pump It Up" featuring some very propulsive and frenetic bass playing from Thomas.

"In retrospect, a lot of the time, the riffs didn't come from my fingers as much as from singing them, if you know what I mean," Thomas explained. "It's like if you would sing along, I didn't realize I used to sing these parts until I heard myself on an isolated mic doing it. I used to often sing the parts as I was playing them because it helps you get the phrasing right."

"When I analyzed it, it was actually a hybrid of a riff from (The) Everly Brothers song called 'The Price of Love.' But with the notes changed to those of a Richard Hell and the Voidoids track called 'You Gotta Lose.' And then there's an odd bar where I played 'You Really Got Me.' It's what I call organic sampling. You know, there's nothing original, is there? But it's how you put things together in a different combination, which is original."

With so few riffs available, you could say Thomas was being environmentally responsible by recycling riffs.

"No single-use riffs here," he laughed.

The first four albums Thomas and the other two Attractions recorded with Costello were all produced by Nick Lowe who is a bass player. Does Thomas think that's one of the reasons his bass occupies so much bandwidth in the mixes?

"I used to think back in the day that I was getting a raw deal, you know, I was thinking, 'Oh, the bass could be a bit louder,'" Thomas said."But when I listen back to them now I think, 'Crikey, they really pushed the bass front and center.' I overplayed anyway. So I was quite happy to fill. And so I guess I filled the gaps in, and the bass seemed to carry quite a lot of the song structure."

After the release of the "Armed Forces" album in 1979, Costello received some negative publicity for an incident that occurred at a hotel bar in Columbus, Ohio, where he got into a drunken argument with other musicians and he criticized Buddy Holly, Elvis Presley, Ray Charles and James Brown and used racial slurs. Costello apologized for his behavior at a press conference a couple of days later.

The next album for Costello and The Attractions was called "Get Happy!!" It featured 20 songs heavily influenced by Stax, Motown R&B and soul music. In his book, Thomas asks himself the question: "Were we subconsciously referencing all that was best in popular music as some kind of penance?"

"It would have been subconscious if it was. It wasn't conscious," Thomas said. "And some of the language used is very emotionally loaded and taboo now. And it certainly wasn't that much at the time and not so much in England as it was in America, for instance.

Since the bass plays such a prominent part in soul and R&B, "Get Happy!!" serves as an excellent showcase for Thomas' incredible bass skills.

"Well, that's my album," Thomas said of "Get Happy!!" "Steve Nieve hated it. He absolutely hated playing on that because it was nothing for him to do. Conversely, when we went and did the country album ("Almost Blue," released in 1981), he was in his element doing all his trills and twiddles on the piano. And I might have been loping a horse with a wooden leg. Which is pretty much what all country bass parts sound like. Clip. Clop. Clip. Clip. Clip."

"And it was the right album at the right time because I grew up on all that stuff on Stax and Motown and R&B," Thomas continued. "That's my favorite genre."