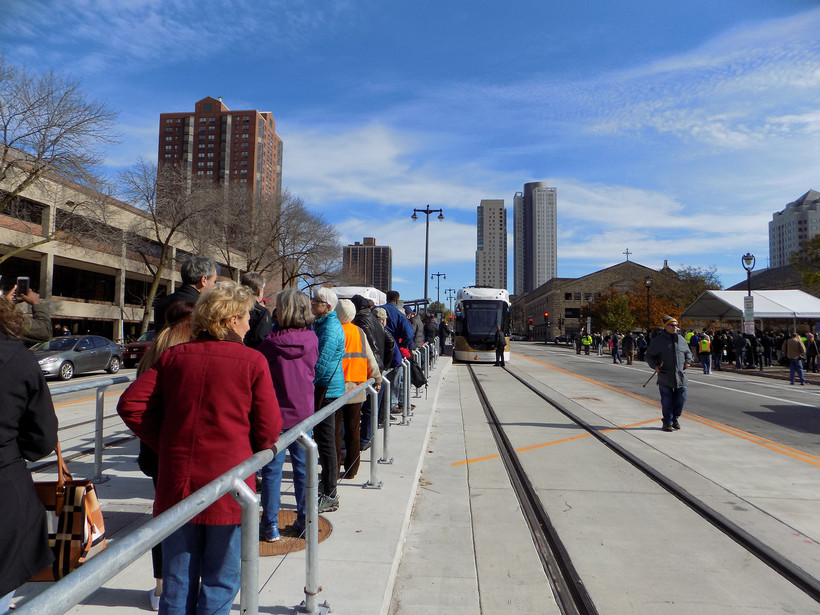 After Years Of Waiting, People Line Up To Ride Milwaukee's New Streetcar

Love it or hate it, Milwaukee’s first new streetcar service line is up and running. A weekend celebration, starting Friday, will welcome the first streetcar to roam city streets in decades.

Officials including Milwaukee Mayor Tom Barrett and U.S. Congresswoman Gwen Moore spoke to a crowd in Cathedral Square before the first official ride of the streetcar. But some of those gathered left the speeches early to secure their spot in line to ride on the new transportation system.

Sam Wilson was waiting in line with her son and two daughters. She is one of the many people who have been critical of the streetcar because of its initial route, which is limited to the downtown area.

"It seems like it’s something that’s to help make richer neighborhoods richer and kind of leave out people on the north side, near south side, so I wanted to hear what Mayor Barrett said in his speech and he did mention it going into other neighborhoods, but I guess we’ll see," she said.

Wilson also said that no matter what she thinks of the streetcar, it’ll be fun for her children to go on.

"I mean it’s not like me not riding it will make it go away, so I’ll let them have a ride," she said.

Penny Beams lives in Pewaukee but she said she spends a lot of time on the Milwaukee lakefront during summer weekends. She welcomes the new transit system, calling Friday a historic day.

"Well there hasn’t been (a streetcar) for so very many years," she said. "And we like to travel through Europe and all over the bigger cities in the East Coast and the West Coast, and I see how effective mass transit is like this and it’s something that has always been missing in Milwaukee," she said, adding that it could help boost tourism in Milwaukee.

While the route is central to Milwaukee's downtown, people have also criticized that it largely avoids the downtown's biggest attractions, including the new Fiserv Forum and the Wisconsin Center.

Walter Love lives in Milwaukee and he said while he doesn’t live downtown, he’ll likely use the streetcar during the summer. He also thinks it will help boost out-of-town visits.

"I certainly think it would behoove us to have it because you can jump on here and run around downtown without having to worry about the parking situation," Love said.

Riders will be able to board the more than two-mile initial route for free in the streetcar’s first year because of a 12-year, $10 million sponsorship deal the city struck with the Potawatomi Hotel and Casino.

The $128 million project used federal and local dollars, which couldn’t be used for anything else, according to officials.

The streetcar is expected up to every 15 minutes in its 18 stops. An expansion is planned to serve around the lakefront, but that isn’t expected to be operating until 2020.