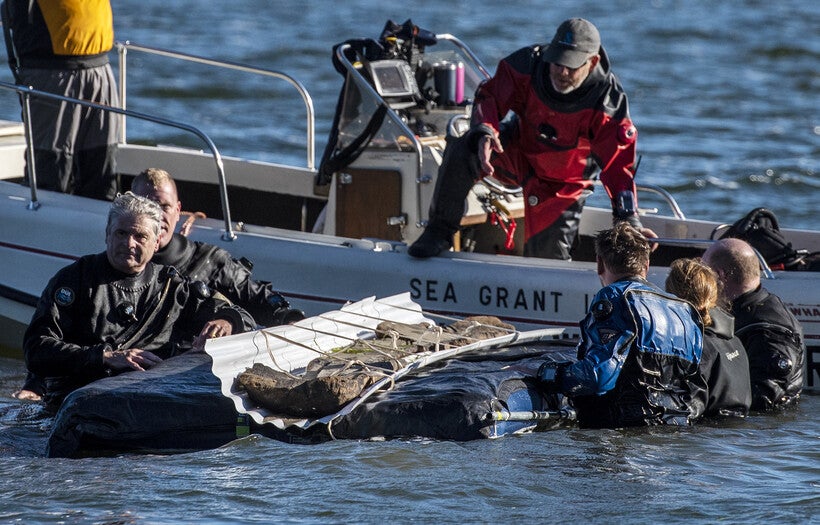 A crew transports a 3,000-year-old canoe across Lake Mendota on Thursday, Sept. 22, 2022, before bringing it ashore at Spring Harbor Beach in Madison, Wis. Angela Major/WPR

The dugout canoe, dating back to around 1,000 BC, is the oldest of its kind to have been found in the Great Lakes region.
By Sarah Lehr
Share:

Diving in Madison's Lake Mendota can be tricky in September, when the opaque water limits visibility to about a foot.

It's even trickier when you're excavating a 3,000-year-old hunk of carved wood, the oldest of its kind ever to have been discovered in the Great Lakes Region.

After months of preparation, divers on Thursday pulled an unfathomably old canoe from Madison's largest lake while onlookers and local dignitaries cheered.

The canoe, made millennia ago by hollowing out a single piece of white oak, now has the consistency of "wet cardboard," said maritime archeologist Tamara Thomsen, who is part of the team that spent a week excavating the nearly 15-foot-long object. The divers, some of them volunteers, carefully pried away sand and clay before placing the soft-bottomed boat onto a piece of plastic for stability, lifting it onto a hammock and loading it on a raft to be towed to shore. 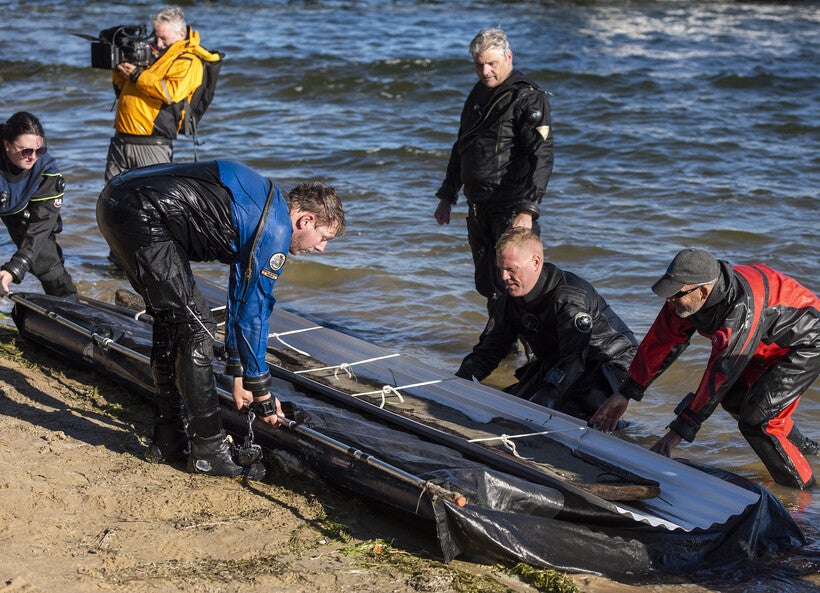 The 3,000-year-old canoe is placed on the shore at Spring Harbor Beach after being removed from Lake Mendota on Thursday, Sept. 22, 2022, in Madison, Wis. Angela Major/WPR

"There were knots in my stomach until I got to the beach because it was so fragile," said Thomsen, who works for the Wisconsin Historical Society. "As soon as you look at it in a strange way, it falls apart."

It's the second ancient canoe Thomsen's discovered in Lake Mendota. She spotted a 1,200-year-old dugout vessel while scuba-diving on her day off work in June 2021.

The canoe excavated Thursday is believed to be more than twice as old, dating back to about 1,000 B.C., state archeologists say. 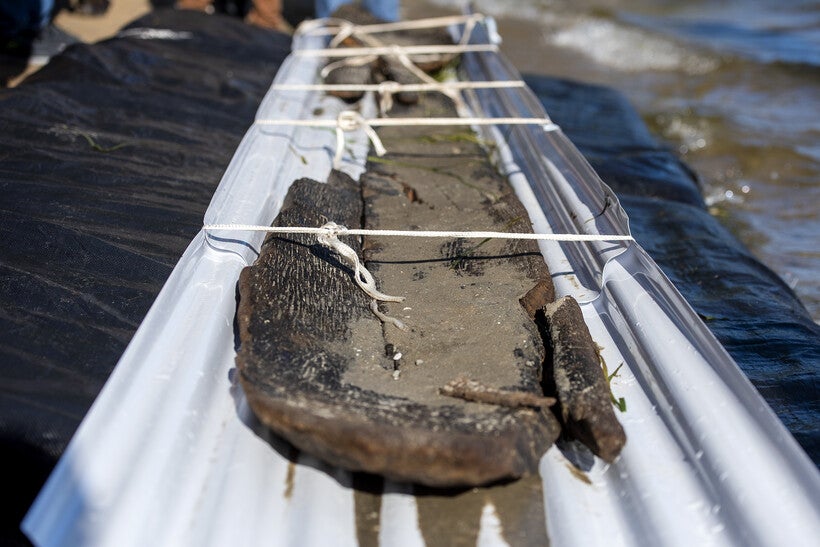 A 3,000-year-old canoe sits on the shore of Spring Harbor Beach after being removed from Lake Mendota on Thursday, Sept. 22, 2022, in Madison, Wis. Angela Major/WPR

'It's not a joke. I found another dugout canoe.'

Thomsen, who teaches diving on weekends, made the second discovery this May while giving scuba lessons to one of her students. The object, while mostly buried in sand and silt, had a curved end sticking out. So Thomsen went back to her boat and grabbed a camera and a tape measure.

Then, she fired off a text to her boss, State Archaeologist Jim Skibo: "It's not a joke. I found another dugout canoe."

Although the recently unearthed boat wasn't as intact as the 1,200-year-old canoe when it was pulled from Lake Mendota, divers managed to keep all the pieces, which can be put back together for further study.

"For a 3,000-year-old canoe, it's looking really good," said Amy Rosebrough, an archeologist with the Wisconsin Historical Society. 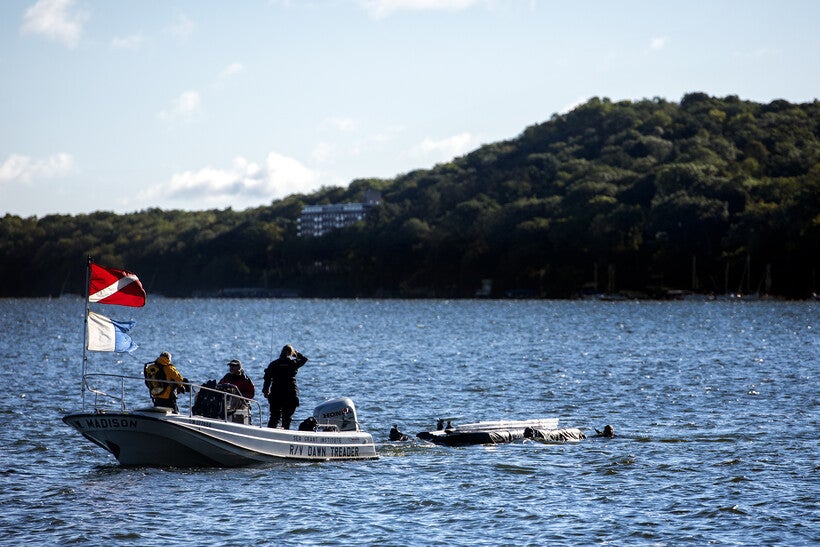 'The New York of Wisconsin back in the day'

The presence of two such "extraordinarily significant" archeologic findings in the same body of water may indicate Wisconsin's Four Lakes region was a substantial population center for Indigenous people, Rosebrough said.

"It may be just that we're starting to find these canoes now is an indication that the population here was high enough," Rosebrough said. "If you're looking for taxis, say, you're going to find more in New York City than you are a small town. So, let's call it the New York of Wisconsin back in the day."

Rosebrough's studied the effigy mounds Indigenous people built from earth and said the high concentration of those sacred burial places may tell a similar story about what's now southern Wisconsin.

"While the mounds are younger than this canoe, it does show that the population here was quite high, that people really loved this location, and that it was dear to their heart and that they preferred to stay here if they could," she said. 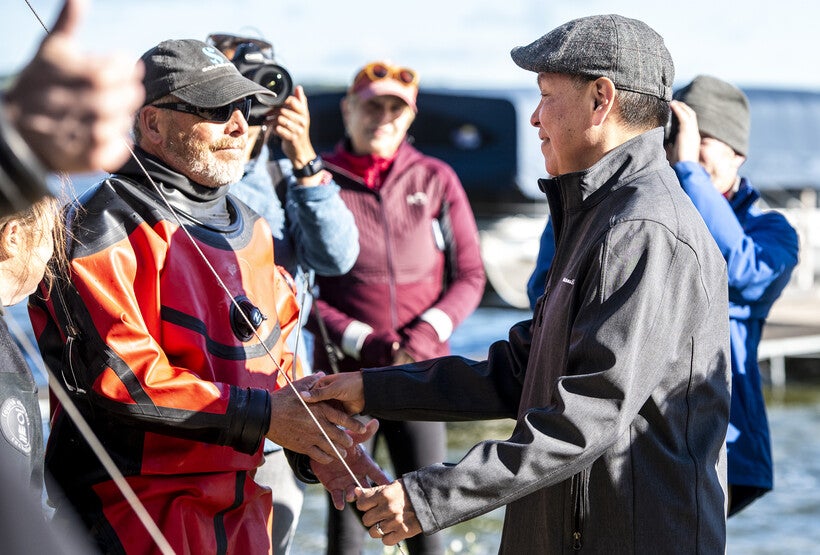 "They had transportation, there was trade and commerce involved," he said of the people who made the canoe. "Our future generations will encounter this, and they'll have that sense of belonging to the area, to the land, to the water."

For now, the canoe is being sent to the State Archive Preservation Facility in Madison. Over about a two-year-period, polyethylene glycol will be added gradually to replace water in the wood's cells. The boat will be kept alongside the other ancient canoe in a specially-built vat of purified water.

"If you dried it out, this canoe would turn to dust" Skibo said.

Eventually, both canoes will be freeze-dried, so they can be displayed. One or both of the boats will eventually be shown at a new Wisconsin history museum that's slated to open in Madison in 2026, Skibo said.

The canoe must have been buried for millennia because, had it been exposed to light, the material would have broken down, Skibo said. Both canoes were found at a location where there's a steep drop in the depth of the lake's floor, indicating water levels and the shoreline's location may have changed over time. 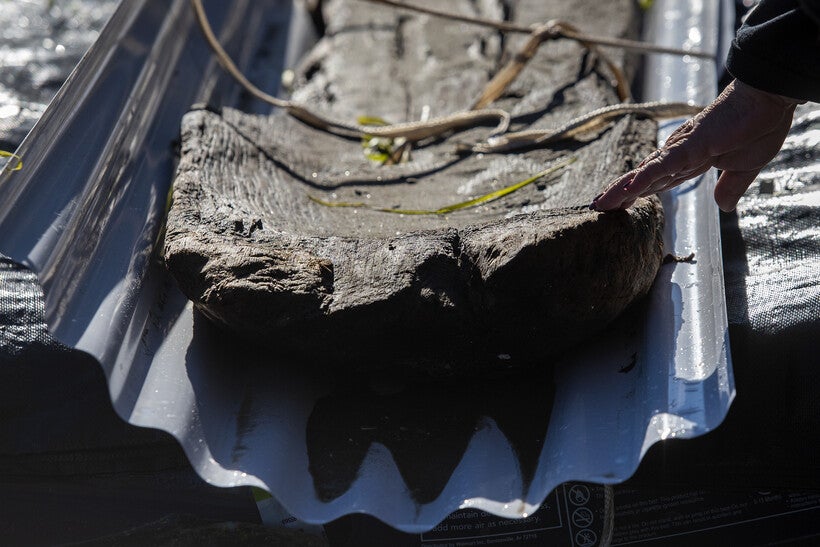 Skibo has a theory on how they got there. When Lake Mendota was shallower than it is today, he said people could have buried their canoes in the sand during the fall for storage. A severe winter could have submerged the boats in the lake, where they were lost.

"There happens to be a big snowfall that year," Skibo said, explaining his idea. "The Yahara River gushes forth, and it's now 15 feet in the water, and they can't find it. And now it's gradually slid down this bank and underground."

Once the canoe is scanned and thoroughly photographed, researchers can learn more about the tools that constructed it. And they can compare it to the other Mendota canoe to study how boat building in the region changed over time.

"It's showing us that Lake Mendota is still full of surprises," Rosebrough said of the discovery. "It is, I think, going to keep surprising us in the months and years to come."