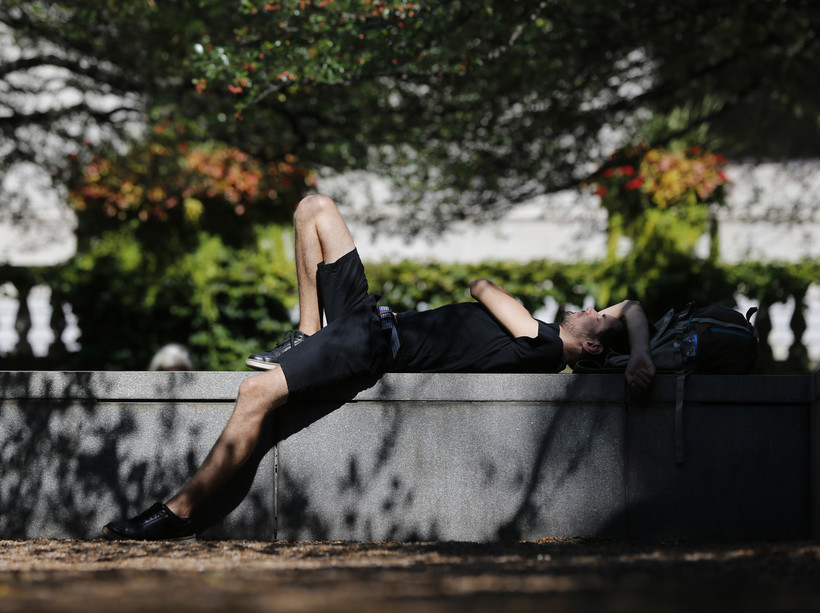 Kamil Szydlo naps in a garden at the Art Institute of Chicago as temperatures on the first day of Fall edged into the low 90's, Friday, Sept. 22, 2017, in Chicago. Charles Rex Arbogast/AP Photo

Zorba Paster: Take A Nap ... For Your Heart

I love napping. Now, here’s the quandary. When I decide to take my mid-afternoon nap I feel slothful. Yet after I take the nap I feel energized.

One part of me says I shouldn’t be doing this. I should be out and about doing something "useful" — reading, cooking, exercising, walking the dog or writing this column. Not lying down taking a few zzz’s. From where does this guilt arise? It’s our puritanical heritage. We think something that feels good must be bad. We think we should be productive all the time, 24/7. Go. Go. Go.

And our electronic addiction hasn’t done anything to dissuade us from this truly asinine concept. We take our office with us on the computer or on our phones. We take phone calls all the time, in the middle of soccer games – when we’re supposed to be watching our kids. We answer during family meals, which are supposed to be family time. We have to take this call. Where did that come from? Our 24/7 work ethic.

Shutting off the lights for 20 minutes or so is considered to be, well, just for the old. For the sick. If you do that there must be something wrong with you. Get up and move!

We brag about how much time we spend at the gym, at work and more, but we never brag about napping. In fact, when I ask people in the office whether they nap, if the answer is yes it’s a sheepish yes. It’s not the robust affirmation I get from them when I ask how many steps they take daily.

Well, folks, listen up. New research published in the British Medical Journal shows that napping just might reduce heart attacks and strokes. And that means it just might be something you want to add to your jogging-yoga-treadmill-biking-swimming routine.

First, step back a moment. The impact of napping on heart health has been hotly contested for years. The studies have been, at best, controversial. So researchers in Lausanne, Switzerland, tried to put the topic to rest.

They looked at the association between napping frequency and average nap duration and the risk of fatal and non-fatal cardiovascular disease "events," such as heart attack, stroke or heart failure. The data showed that a daytime nap taken once or twice a week was associated with fewer strokes and heart attacks.

The study included 3,462 randomly selected residents of Lausanne. From 2003 to 2006, researchers recruited men and women between the ages of 35 and 75, looking at their health habits — smoking, drinking, eating right or wrong, exercise — to see what might encourage or discourage cardiovascular disease.

Participants’ first checkup took place between 2009 and 2012, when information on their sleep and nap patterns in the previous week was collected. Their health was then subsequently monitored for the next five years.

Now here’s the skinny. Having one to two naps a week was associated with a whopping 48 percent reduction in heart attacks and strokes compared to those who didn’t nap at all. Having more than that didn’t seem to matter much. And as for nap length — a 10-minute power nap was just as good as a 1 hour snooze.

My spin: Naps are good. Naps are important. Eat right. Exercise right. Now we can put in nap right. I suspect that meditation and mindfulness practice work as well. So folks time for me to shut off the phone, pull the plug on this computer, close my eyes and recharge. Try it yourself.