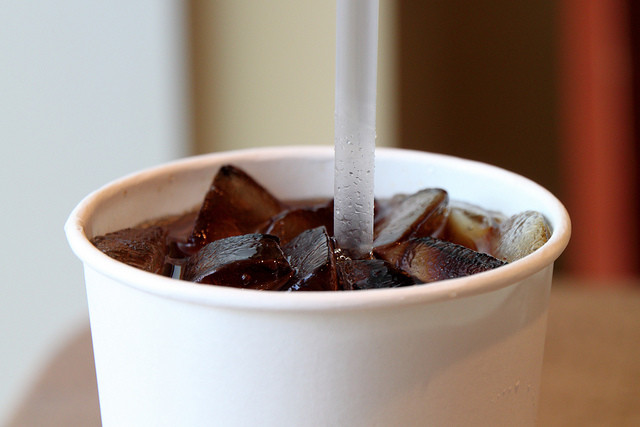 Zorba Paster: Put A Cap On That Diet Soda Habit

I don’t drink much soda. Sure, when I’m watching a Packers game I might grab a diet cola instead of a beer. Or for that summer picnic when I’m eating my Aunt Shirley’s potato salad — yummy stuff! — I’ll have a soda. But it’s not really a craving for me. We never had it in our house as a kid so I never developed a habit.

Half of all Americans, however, drink soda on any given day — an average of two to three cans per day, in fact. If you’re consuming the "hard stuff," regular soda, it has the equivalent of about 20 teaspoons of sugar in a 20-ounce bottle. If I told you to swallow 20 sugar cubes in a few minutes, you’d call me nuts. But that’s what you do when you drink a 20-ouncer of regular soda.

But what about the so-called "diet" soda? For years and years, I have been pretty neutral on the chemically sweetened stuff. NutraSweet (made with aspartame), Splenda (sucralose), saccharine products and the new kid on the block, stevia (made from plant leaves), have all been studied over and over and over again. And all the important animal studies have shown they are safe. Except …

Now the newest study, published in the journal Stroke, indicates diet soda just might cause strokes and dementia. If that turns out to be true, then every soda you drink is a risky business. If I thought my diet drink was going to give me a stroke, I’d toss the bottle.

Before I go into this new study, I want to share something very important with you — something that just might shock you. Not one study on diet soda has shown that drinking it makes you thin. In fact, the more diet drinks we consume, the fatter we’ve become. Weird.

One theory is that when we trigger the sweet receptors in our mouth — by drinking diet soda, for example — we trigger the desire to consume calories. Our appetite is stimulated and we want those calories from somewhere. If they aren’t in that zero-calorie drink, then we’ll just eat more food to satisfy the craving. Mind-boggling, isn’t it?

But about that Stroke study. Researchers looked at nearly 4,000 people over age 45, with each of them filling out questionnaires asking what they ate and drank, whether they smoked and if they exercised. Each person also had regular physical exams, tracking their health over a 10-year period.

All participants were healthy at the beginning, but over the course of the study about 100 people had strokes and 80 developed dementia. When researchers compared those who drank diet soda to those who did not, they found that the diet soda drinkers were three times more likely to suffer strokes or develop dementia.

For years, as I said, I’ve been neutral about diet drinks. Aspartame and sucralose have been studied over and over in double-blind animal studies. The U.S. Food and Drug Administration has said they are safe to consume, even though countless websites have been devoted to telling people they are harmful. These sites have never backed up those claims with credible scientific evidence. But this newest study has given me pause to reflect a bit.

Diet drinks started when I was a kid back in the 1960s, but they really took off when aspartame was invented in the 1980s. Americans consume a humongous amount of the stuff.

My spin: An "association" between diet drinks and stroke or dementia, as implied in this newest study, is not cause and effect. It doesn’t prove anything, though perhaps it does show a pattern. I certainly can’t say diet soda causes strokes and dementia. But if you consume these drinks, especially a lot of diet soda day in and day out, I think this study should give you pause.

Maybe there is a dose effect — the more you drink, the greater the risk, just like alcohol. I’m not sure. But it might be best just to consider that old standby, water. We know that’s safe. Stay well.