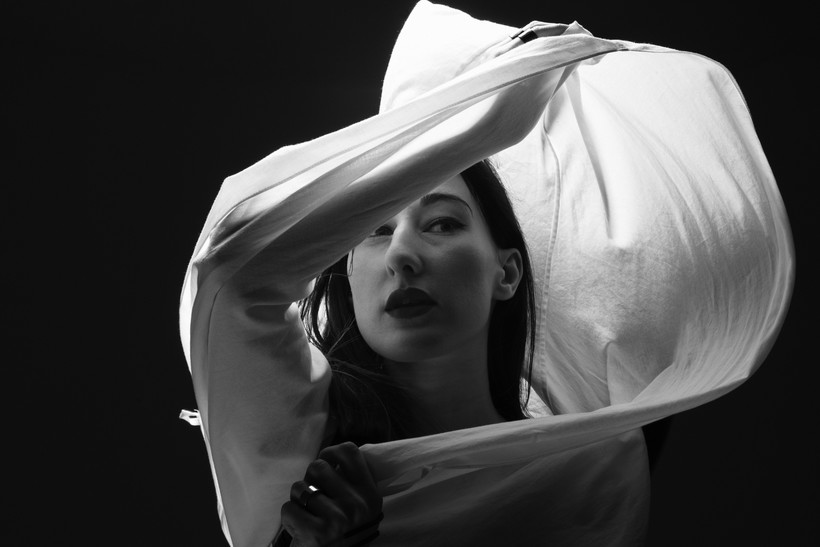 Nika Danilova, who performs as Zola Jesus, has used the pandemic to rethink how the music industry should work. Courtesy of Zola Jesus

Zola Jesus Wants To Build Community Around Music, Not Just Make It Onto Streaming Playlists

In May, when Zola Jesus released a new live album, music venues across the nation had been shut down for a matter of weeks. Months later, many of them still haven’t reopened, and the album, "Live at Roadburn 2018," stirs emotions even apart from its stark, dramatic gothic pop songs.

"I didn't realize, and I think a lot of musicians didn't realize, how much touring and performing nourished our souls." Listening to it today still brings "a lot of grief and sadness, because I miss it," Nika Danilova, who performs as Zola Jesus, told WPR's "BETA."

Danilova has spent the pandemic at home in rural Merrill, Wisconsin, where she's written and recorded songs, played video games and thought a lot about the way the music industry's economics are tilted toward large corporations and away from the musicians.

It's been a dark year, she said — challenging financially, creatively and emotionally. In some ways, those emotions can fuel her art, she said, "because great work comes from destruction."

"But at the same time, if there's not enough of a vision of the future ... it just feels very empty," Danilova said.

At the same time, though, she said she's finding hope in seeking new ways to connect with her audience, and building a community online.

As Zola Jesus, Danilova has built a national following with a series of dark, soaring and noisy albums. In 2017, her album "Okovi" made critics' lists of best albums of the year. Her training in opera shows in her powerful vocals and the life-and-death stakes of her songs. She's performed at the Guggenheim Museum in New York City, and outside in a snowstorm.

But she has also always felt like an outsider. Not long after she had success as an indie artist, she left Los Angeles where she had been working to move to Vashon Island on Puget Sound, outside of Seattle. A few years later, she moved back to Wisconsin, where she spent much of her childhood.

"Being in the woods definitely feeds my soul," she said.

Her mother's family is Slovenian and her father's family is of Russian descent from Ukraine. When she got older and traveled to Eastern Europe, she said, "it just felt like home."

"Eastern Europe feels to me like being in Wisconsin," she said. "It has the same spirit, the same smells. ... There's this feeling of connection to that part of the world."

She's also, she said, drawn to the folk culture of Eastern Europe. This month, she released a version of the Armenian folk song "Krunk," donating proceeds to the Armenia Fund to support those affected by the war with Azerbaijan.

She's used the isolation of the pandemic to try to reimagine what the music business could look like.

Prolific on Twitter, Danilova has shared her discontent with Spotify and other big streaming services, which pay artists fractions of a cent per stream. In an essay she published July 31, she wrote that "as a musician I have not met a single peer that is satisfied with the income they get from streaming."

Her case against Spotify, Apple Music and others goes deeper than a debate about royalties. She sees the streaming services as middle-men that stand between artists and their audiences — giving listeners algorithm-approved playlists that may capture a vibe, but don't give people a chance to connect with artists in a way that feels personal or unmediated.

Danilova has promoted Bandcamp, an online music marketplace that gives artists and labels more control over their products. And in October, she launched a Patreon page, through which she said she hopes to form a more personal, more direct relationship with her audience. Patreon is a website that allows people to support artists with direct donations.

"I have a fantasy of being able to work together to subvert the reptilian overlords trying to take control of independent art and give that power back to us," she writes in the introduction to her Patreon page, through which she's sold music and incense, and read tarot cards for fans. She promises a Patreon-exclusive album if she reaches 1,000 patrons. She has 692, as of Dec. 7.

The experience of interacting with people through the direct-support site, she said, has felt genuinely like building a community.

Musicians, she said, "have been stuck in this transactional capitalist model for so long that it's going to be hard to reroute our brains to think that this is OK," she said.

She added that interacting with her fans "completely deepens my connection to my work and to my fans. ... It just totally changed my entire mindset."

The pandemic may have lasting effects on the music business. Venues are closing all over the country, and Danilova fears the companies most likely to weather 2020 and its aftermath are large corporate entities like Live Nation, not independent venues.

"We're losing places that are our culture creators," she said.

But Danilova has hope that people's relationship to music — as a coping mechanism in hard times, as a way of connecting with others at a distance — may have grown closer in the pandemic.

"That could be a positive change, in terms of really recognizing the power of art and music, finding solace in it, finding healing and comfort," she said.