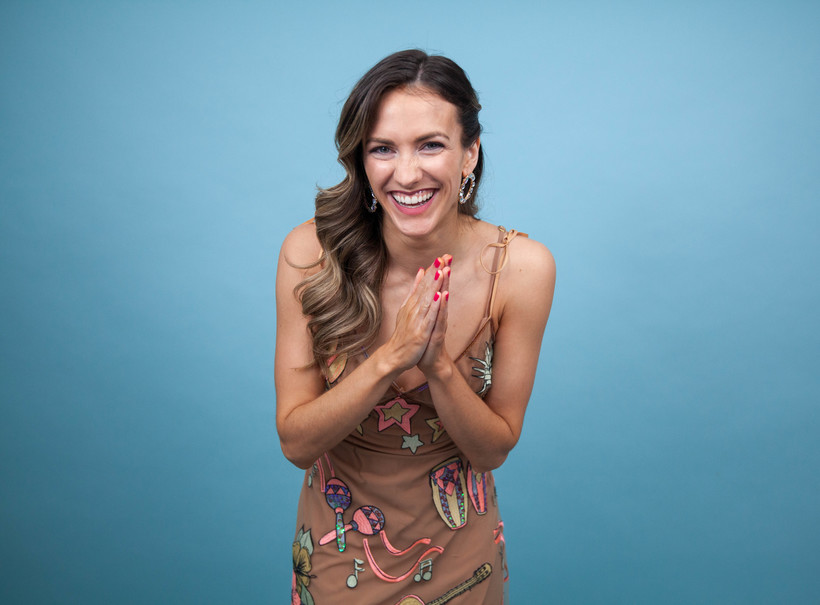 YouTube, sketch comedian Julie Nolke on her past, present and future selves

The rising star is a YouTube auteur and her 'SNL' audition video is gold. GOLD!
By Doug Gordon
Share:

The Canadian actor, writer and comedian Julie Nolke is a rising star. She's already established herself as a bona fide YouTube auteur. Her video series "Explaining the Pandemic to My Past Self" has received millions and millions of views.

Nolke joined WPR's "BETA" from her Toronto home to explain why she was initially reluctant to post the first video in the series.

"I didn't think it was very good," Nolke said. "I'm obviously not a great judge of my own work."

In the series, Nolke is visited by her "future self" and warned of the mostly bad and sometimes worse news that's taken place every few months between 2020 and 2022. Nolke said she and her husband wore the jokes out around their home, but viewers of her videos found them "new and relatable."

"It was just such a weird thing that collectively, globally, we were all sharing," Nolke said. "I can't think of a time in my life where it's like the entire world was on the same page. I never expected that it would feel like the apocalypse. And so that's kind of the birth of the video."

In the summer of 2021, Nolke auditioned for "Saturday Night Live." She said she never considered herself an impressionist, but she's posted a hilarious video of the characters that she performed, including impressions of Winona Ryder and of Phoebe Waller-Bridge from "Fleabag."

She only had two weeks to prepare for the audition. She decided to post it on YouTube a few months later because she put so much work into it.

"There's kind of a mandate for what you prepare," she said. "You need original characters, topical characters, lots of accents — show as much as you can in five minutes. And lots of impressions, and impressions aren't really my forte."

Nolke said she chose characters who she felt she knew well and ones whose "-isms" she could capture well.

"Like Winona Ryder," she said. "I look a little bit like her. She's got these big doe eyes and kind of a tight mouth. And I was able to kind of replicate that."

With all due respect, Nolke is definitely an impressionist, in "BETA"'s humble opinion. She is a chameleonic comedian in this audition video, and yet she was not hired for "SNL," which raises the question: What was "SNL" creator Lorne Michaels thinking?

Nolke said she got a really wonderful, complimentary email after she asked if there was anything that she can do differently for next year. They told her there wasn't, and that she should just send in another audition video.

"I think they just had a lot of submissions from very talented people," she said. "And, of course, they want a lot of diversity on the roster, and they want people from totally different backgrounds and whatnot. And I think I just kind of was similar to what they already had, which is totally fair. It's important to get diverse voices in there."

She told herself that whatever she was going to do it would be with a French accent because she wanted to improve it. She said she made it halfway through the video, had a meltdown thinking "this is absolute crap and nobody's going to watch it," got over that, finished the video and posted it.

"And people really responded to it and liked it," she said.

Nolke's fellow Canadian Bruce McCulloch of "The Kids in the Hall" comedy troupe hired her to act in the CBC television sketch comedy series, "TallBoyz" in 2019.

About a year later, he messaged Nolke to pitch the idea of making a show together.

Nolke said they've been working on developing a show for the past year. She described it as a plot-driven dark comedy.

"He and I wanted to make something that had authentic civilian characters who were flawed, who felt things, but also in a very, very comedic way," she said. "Both he and I have made a lot of sketch (comedy), and we wanted something that was a little more true to life. And that's kind of the path we went down. But it is very funny."

McCulloch has described Nolke's approach to comedy as "ferocious." Nolke said she thinks that he's referring to the fact that she's a "self-described" workhorse.