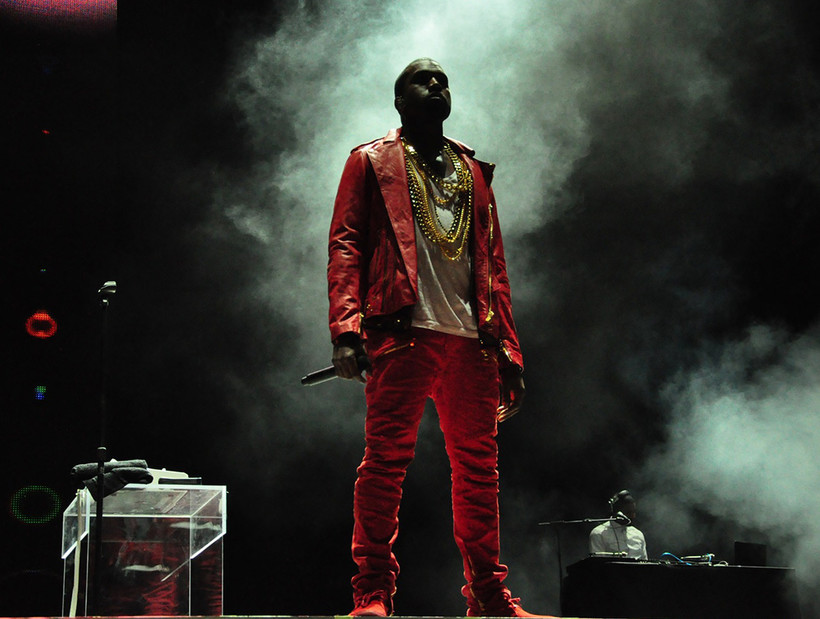 The Redemption In 'My Beautiful Dark Twisted Fantasy'

"I'm really happy for you, I'm gonna let you finish."

In 2009, rapper Kanye West was reeling from a string of national broadcast embarrassments, including a clunky attempt at criticizing the 43rd president during a Hurricane Katrina relief telethon and humiliating one of pop music’s biggest stars – Taylor Swift – at the MTV Video Music Awards.

It seemed West couldn't get out of his own way every time he had the nation’s attention and his public persona was quickly alienating fans of his work despite the fact that his creative output was reaching new heights.

West went on a sabbatical and traveled the world to allow the public shame to blow over. He signed up for a fashion internship in Rome and there were rumors he would be retiring from music. Instead, West retreated to his recording studios in Hawaii and would begin work on what many critics and fans consider his masterpiece, "My Beautiful Dark Twisted Fantasy."

The premiere music and cultural criticism site, Pitchfork.com, gave the record the incredibly rare perfect score of 10.0. NPR's music critic Ann Powers at the time wrote in the Los Angeles Times that the album "is Picasso-like, fulfilling the Cubist mandate of rearranging form, texture, color and space to suggest new ways of viewing things."

Writer Kirk Walker Graves is author of the 33 and 1/3 series on seminal albums and wrote, "Kanye West’s My Beautiful Dark Twisted Fantasy." Graves joined WPR’s "BETA" to discuss the record and said that at its most self-aware moments, MBDTF is West’s artistic version of both a self-acquittal from and an atonement for his public outbursts.

"He was truly explaining himself the only way he knew how to explain himself and that was obviously aesthetically. The record is a testament to that," says Graves.

"It has this gargantuan human comedy element to it that I think, I certainly have yet to encounter on another record in this century at least and I think that is kind of the reason it has resonated so much," he added.

Graves writes about the dichotomy in West’s work. While West’s narcissistic tendencies might drive him to embarrass himself on national TV, they drive a lot of his more ambitious musical endeavors. Even further, despite West’s massive ego, a lot of MBDTF is about exploring self-doubt.

"That willingness to go to those places and that willingness to really cling to vulnerability like a plank after a shipwreck, I think that people relate to that," Graves said. "It comes across most, to me, most profoundly in 'Runaway' – which is the album’s emotional center piece."

At over 9 minutes long, 'Runaway' begins as perhaps one of West’s best pop songs.

"It’s one of the most gorgeous, in my opinion, pop creations that I've ever seen. To this day, it can still make the hair on the back of my neck stand up when I hear those first few notes in 'Runaway' – that stark piano," says Graves.

However, West eschews radio play opportunities when the song devolves into a disorienting three-minute coda with West providing a barely recognizable commentary while being accompanied by orchestral strings.

"That song really is about self-doubt, self-disavowal and really it’s this naked, almost embarrassingly, uncomfortably honest plea for freedom you don’t hear on many hip-hop tracks or really in popular music," says Graves.

MBDTF begins with the song, "Dark Fantasy." The track opens with rapper Nicki Minaj performing a "perverse interpolation of Roald Dahl’s poem, 'Cinderella,'" Graves says. That recitation welcomes you to the record and the song sets the table for what’s to follow.

"This track is an opening statement," says Graves. "That opening sample is asking 'can we get much higher' and there’s this sense of aspiration that really defines the song and sets the tone for the rest of the record. There’s this sense of you’re about to enter a really intense ride and hold on as tight as you can."

Graves likens the hit single off the album, "POWER," to the Percy Bysshe Shelley poem, "Ozymandias." He argues that it is West grappling – much like the fallen ruler – with the fragility of power or celebrity.

"There’s a self-awareness in 'POWER' that I think Kanye sees the fragility of his own status. I think that’s bound up so intimately with this record, it’s almost impossible to understand the record without understanding his own awareness of not only his own ego fragility but also his status – whether he’s beloved or a pariah – I think he knows none of those things are constants and power is not permanent.”

Wisconsin native Justin Vernon shows up on the album’s penultimate song, "Lost in the World." (West would leave the closing track to spoken-word performer Gil Scott-Heron.) Vernon visited Hawaii to record a sample of his experimental self-chorus, "Woods" for West. West would transform that musical sentiment into the closing anthem of MBDTF.

"There’s this sense of Kanye making this final claim. Again, if this album is an aesthetic self-acquittal of sorts for his own personality, if it’s an apology record in that sense, it’s also making a claim," Graves says. "That track really is all about fusing these binaries within Kanye’s personality."