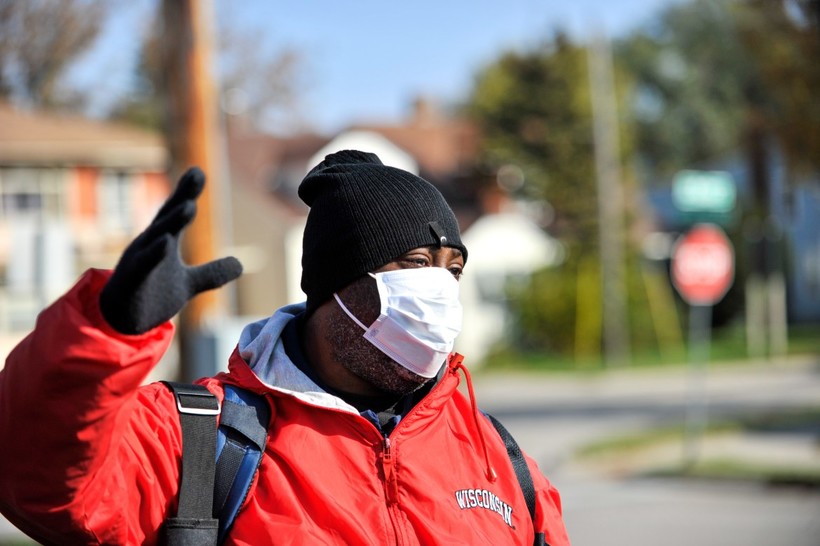 Until recently, Madee was sleeping under a tarp near some railroad tracks in downtown Green Bay, Wis. He earned a bachelor’s degree in sociology and history from St. Norbert College, but debilitating pain from a broken leg and mental health issues sent his "pretty good existence" off the rails, leaving him unhoused. Josh Staloch/The Press Times

Using a blue tarp as his roof, 49-year-old Madee did his best to protect himself from the elements.

Until recently, the college graduate called a bush near the railroad tracks in downtown Green Bay "home."

Scouring the area for a place to live was nothing new for Madee, because he’s spent the better part of the past three years on the streets. A broken leg not fully rehabbed, which led to long-term, debilitating pain, and emerging mental health issues, sent Madee’s "pretty good existence" — including a job and a home he shared with his girlfriend — off the rails, leaving him homeless.

A drop in temperatures prompted Madee to seek shelter at St. John’s Homeless Shelter, where he has stayed on and off since early November. He is among possibly hundreds of people in Brown County who are or have experienced homelessness — including seven who have died on the streets over the past seven years.

"She couldn’t access services, and a year later she committed suicide after being homeless," VanHandel said, fighting back tears.

Wisconsin in 2020 had an estimated 4,515 people experiencing homelessness, according to the most recent available data. In 2021, the Brown County Health and Human Services Department served 175 people who identified as homeless.

For the housed, homelessness may seem foreign — something that could never happen to them. It can be easy to pretend not to see the guy sleeping in the park, or to ignore the woman standing at an intersection holding a handwritten plea for help.

Terri Refsguard, New Community Shelter chief executive officer, said their experiences vary drastically, but all people experiencing homelessness have one thing in common: The temporary situation doesn’t define who they are.

"It’s a temporary situation," Refsguard said. "There is not 'the homeless' — this big group of people. It’s individuals experiencing homelessness for one reason or another." 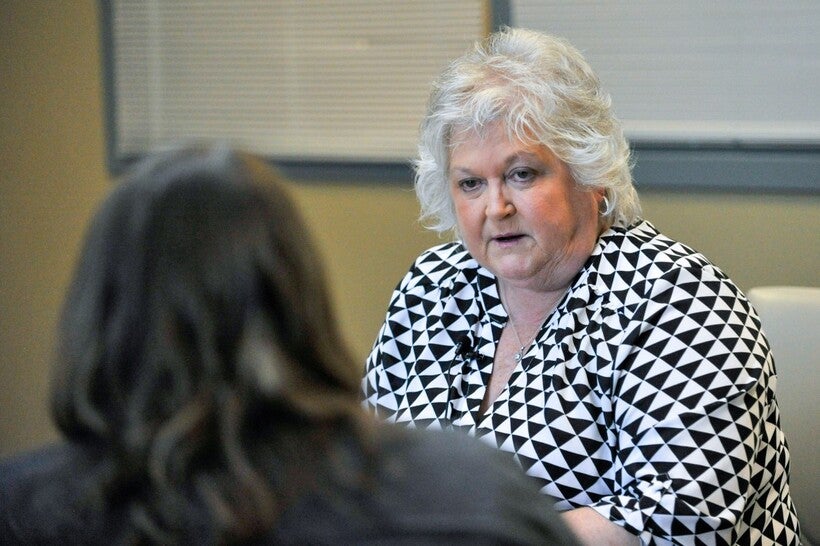 Terri Refsguard, New Community Shelter chief executive officer, says there is no "typical" person who lacks housing. A range of factors cause people to be unhoused, she says, but such conditions do not define who someone is. Josh Staloch/The Press Times

Struggling in the shadows

VanHandel said homelessness has been an ongoing struggle in Brown County, long dealt with in the shadows. The COVID-19 pandemic exacerbated it and made it more visible.

"You cannot ignore it anymore," he said. "In the past during the day, homeless individuals would be at the library or keeping warm in stores or gas stations. The pandemic took that away, so more and more we see them on the streets and in parks."

For years, the brunt of local responsibility seems to have fallen on the city of Green Bay, whose downtown holds most of the county’s resources for the unhoused.

In 2020, mostly due to the pandemic, the city saw more people who lack housing gathering in St. John’s Park in the heart of downtown, generating more than 100 police calls from April to October, including disturbances, public drug use and sexual assaults.

This led the Green Bay City Council to approve an outreach program in the park, facilitated by St. John Homeless Shelter, in hopes of preventing similar issues in the future.

"This whole thing is not planned to be a solution," Council Vice President Barbara Dorff said at a March meeting. "This is an intervention in a problem… It wasn’t intended to be a solution, but it’s a step in the right direction."

Though the program received strong support from the majority of the council, and was even extended until November, some alderpersons expressed frustration that responsibility fell solely on the city — stressing the need for county involvement.

"It is not enough, in my opinion, to just say the county is at the table," Alder Brian Johnson said at the same meeting. "We need investment. This is a Brown County problem and the city of Green Bay is bearing the expense."

That investment came in the form of a community homelessness initiative, a partnership between the Green Bay Community Foundation, the Brown County Homeless and Housing Coalition, Brown County United Way, the city of Green Bay, Brown County and the Corporation for Supportive Housing.

Rashad Cobb, community engagement program officer with the Community Foundation and member of the initiative, said the group gathered data from service providers and lived experiences to develop a blueprint aimed at preventing and ending homelessness in the Greater Green Bay region.

VanHandel, who first started working on the issue in 2010 as a community police officer, said drug and alcohol abuse typically underlied homelessness in his early years and much of his work focused on increasing detoxification services.

"People could actually go into treatment and eventually not detox in an emergency room," he said, "not constantly have police calls, and rescue calls taking them to an ER and then discharged."

In 2016, with the help of the Brown County Homeless and Housing Coalition’s Basic Needs committee, detoxification services were restored at Bellin Psychiatric for people facing chronic homelessness.

At that same time, shelters like St. John’s were evolving, too, and started to provide sobriety rooms, which allow guests to be more closely monitored. 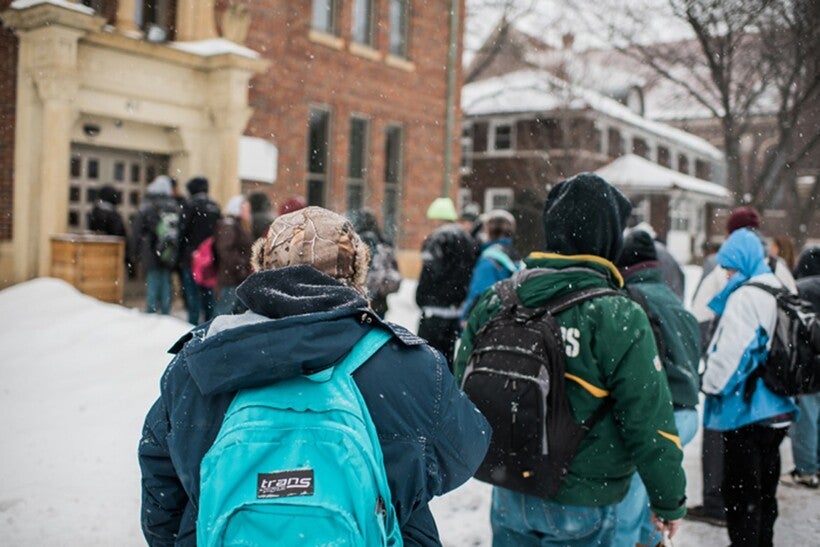 The average temperature in Green Bay, Wis. in January is 9 degrees. These people are getting out of the cold and receiving a warm meal and a place to sleep from St. John’s Homeless Shelter in Green Bay. Scott Eastman/The Press Times

VanHandel, Refsguard and Wood agree — the needs of people experiencing homelessness have changed as mental health problems loom even larger than factors like alcohol and drug abuse.
"If we could solve mental health, we could probably solve a lot of their homeless circumstances, as well," VanHandel said.

Wood called job loss the biggest underlying cause of local homelessness when she started her role at St. John’s in 2012, with mental health challenges springing up more sporadically. She recalled one client in her first year who suffered from paranoid schizophrenia and lacked medication.

"It was known, and the shelter took care of him," she said. "The staff, other guests and volunteers — everyone kind of looked out for him, because everyone knew this particular guest was struggling with some pervasive mental health (problems)."

Now if you walk into St. John’s Shelter, Wood said, such cases make up the majority of the population.

Wood said space isn’t the issue — there are beds. But sometimes mental health issues prevent people from being able to use them.

Madee said his bipolar disorder sometimes pushes him to leave the shelter.

"When you are in that much pain, you feel that yucky as a human being, you don’t want to be around people," he said. "I would rather lay outside in the cold than be in there."

Refsguard said recent discussions among shelter directors and other community members seek new solutions for serving the chronically homeless, severely-mentally ill and others with medical challenges.

"We have to figure out what we are going to do to help those people," she said. "It sounds like an assisted-living setting. If it is, then let’s do it, because what an accomplishment that would be for Green Bay, to bring our homeless population on the streets down to next to nothing."

Madee faces uncertainty as seeks a return to stability. But recent physical therapy has helped relieve some of the pain in his leg. And he found part-time work with a temp agency that sends him across the city. He travels by bike.

"I am physically in a better place," Madee said. "I can think a little more clearly now. I want to get back on my feet and in the direction I was before."

Editor's note: Heather Graves is the editor of The Press Times. This story was produced for the NEW News Lab, a local news collaboration in northeast Wisconsin made up of six news organizations, including FoxValley365, The Green Bay Press-Gazette, The Post-Crescent, The Press Times, Wisconsin Public Radio and Wisconsin Watch. The University of Wisconsin-Green Bay’s Journalism Department is an educational partner. Microsoft is providing financial support to the Greater Green Bay Community Foundation and Community Foundation for the Fox Valley Region to fund the initiative. The mission of the lab is to "collaborate to identify and fill information gaps to help residents explore ways to improve their communities and lives — and strengthen democracy."