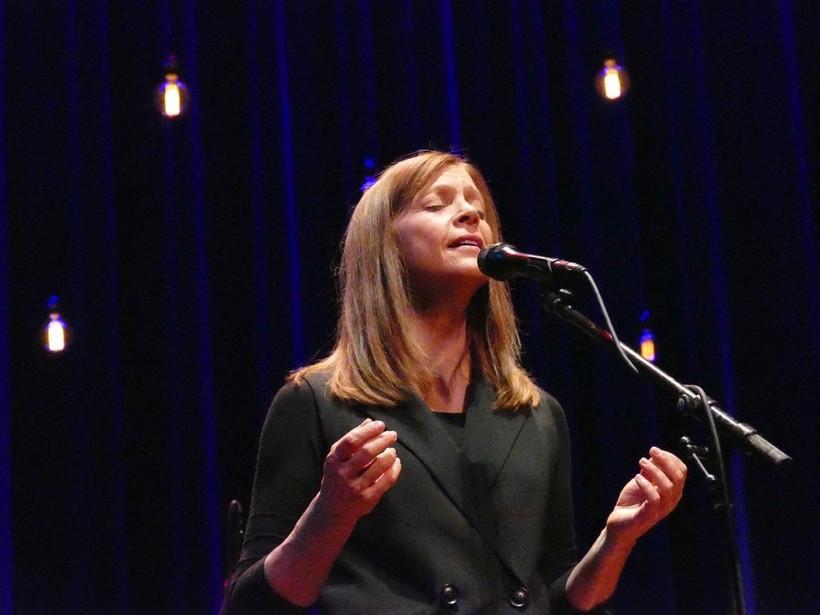 We’re all doing hard things these days. If you’re a health care professional, you’re facing real danger as you tend to folks who are sick, whether it’s from the novel coronavirus or something else. If you’re a grocery store clerk, interacting with the people who come through your check-out line can expose you to risk. For the majority of us who are just staying home, even that can be hard, whether we’re facing unemployment or just not able to see family and friends.

Doing something difficult was a theme back in June 2015, when musician Carrie Newcomer performed in WPR’s Madison studio. Former "Simply Folk" host Stephanie Elkins talked with her, along with pianist Gary Walters and writer, speaker and activist Parker J. Palmer. Newcomer and Palmer have been collaborating for years on various projects, and at the time, they were in Wisconsin giving their presentation "Healing the Heart of Democracy," based on Palmer’s book by the same name and accompanied by Newcomer’s music.

During the studio appearance, Newcomer played a song that, at the time, hadn’t been recorded: "You Can Do This Hard Thing." She has since released it on her 2016 album, "The Beautiful Not Yet," but this earlier version appears on Simply Folk’s 40th anniversary collection. You can download the song from the link above.

Newcomer said the origins of the song came from what her daughter’s Montessori teacher would tell her and her classmates when she was young and facing a new challenge — you can do this hard thing. Newcomer’s rich alto voice and guitar picking, along with Walter’s light piano touch, add to the depth and impact of the lyrics that seem especially applicable in our time of the coronavirus:

The presentation by Palmer and Newcomer also addressed another hard thing — trying to bring people together across the political spectrum.

"So much hinges on how we answer the question, 'What do you believe?'" Palmer said. "And we're so often asking that at a level of high ideological public policy where we find ourselves fragmented and fractured and deeply divided in a way that I think, you know, is coming close to destroying the basic American concept of 'We the people.' And one thing that's absolutely true in a hate-filled situation where you have the politics of rage, as some people call it, is that if you can get to know each other's stories, not at the ideological level, but at the human level, it's really, really hard to hate another person or dismiss them or to even dislike them when you know their story."

Today, we’re all united in a common story of dealing with the coronavirus and the economic fall-out from that. While polls still show political division nationally, it’s in the local community, Palmer argues, that we experience community and unity.

"It's so interesting to me politically in this country," Palmer said, “that if you ask people to talk about politics nationally, the picture you get is very grim, a sort of doomsday picture. But if you ask them to talk about what's going on in their own neighborhoods and in their own friendship groups and other forms of mutual support, it's a very different picture. It's a human picture. It's the news from within. And there's a lot of good news there.”

Even during a pandemic, that is still true.

Related Links:
Carrien Newcomer's website
The Beautiful Not Yet