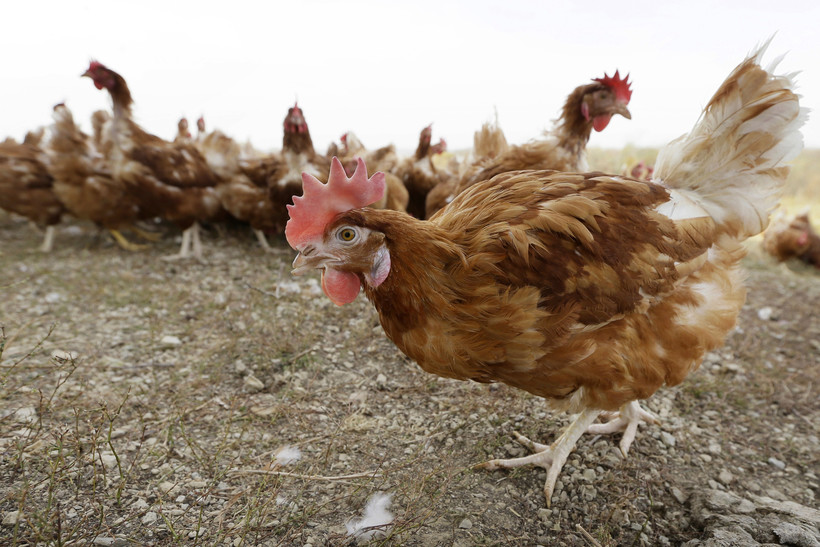 In this Oct. 21, 2015, photo, cage-free chickens walk in a fenced pasture at an organic farm near Waukon, Iowa. Some farmers are wondering if it's OK that eggs sold as free-range come from chickens being kept inside. It's a question that arises lately as farmers try to be open about their product while also protecting chickens from a highly infectious bird flu that has killed roughly 28 million poultry across the country. Charlie Neibergall/AP Photo

Rick Abendroth and his family have operated Abendroth’s Hatchery in Waterloo for more than 50 years. They sell newly-hatched poultry and waterfowl to commercial operations and people with flocks in their backyards or hobby farms.

Abendroth said the outbreak of highly pathogenic avian influenza in the state this spring has divided their customers into two camps.

"Either a person's really skeptical about getting new birds because they're afraid of it, and other people are like, they don't even believe it exists," he said.

As of Friday, there have been 16 confirmed cases of highly pathogenic avian influenza in the state this year according to the state Department of Agriculture, Trade and Consumer Protection. Ten of those cases have been non-commercial owners, from a backyard flock of 15 birds in Sheboygan County to 222 birds in Oconto County.

It’s a much higher number of non-commercial cases than in 2015 when the state experienced its last outbreak of the highly contagious virus. That year there were only 10 cases of avian flu, which included one backyard flock.

State Veterinarian Dr. Darlene Konkle said there are several factors that could influence why more small flock owners have been affected this year. The virus itself is a different strain than what was seen in 2015, but she said both strains spread quickly and cause birds to die quickly.

Konkle said officials have seen more detections of the flu in wild bird populations this year, which is likely how the disease is spreading around the state.

"With potentially more virus out there in the environment this time and a late spring kind of delaying the warm-up and the drying out of the environment, we just may be having a little bit more opportunity for that virus to get into different flocks," she said.

Konkle said officials hope backyard flock owners are also more aware of the threat of avian flu and what signs to look for that indicate an outbreak. She said DATCP has tried to educate poultry owners and encourage them to report possible cases.

Rick Abendroth also thinks there’s more awareness about the presence of avian flu than there was back in 2015, in part because news of outbreaks at large commercial facilities is more available.

"Back then, there was a lot of cases that nobody knew about," Abendroth said. "When someone broke out, no one wanted to talk about it because they didn't want that associated with them. And now information is so easily transmitted, that it doesn't matter. If you want it or not, they're going to find out."

Abendroth said his family’s hatchery already had biosecurity measures in place before the first case of avian flu showed up in Wisconsin in March. They stopped allowing in-person pick up of birds at the start of the COVID-19 pandemic and have continued to restrict who can enter their facility.

He said the outbreak of the virus this year hasn’t affected the number of birds they expect to sell. For customers that are nervous, Abendroth said he's spent more time answering their questions over the phone, but most still buy new birds to add to their flocks. And he’s hopeful the worst of this year’s outbreak has passed.

"I feel like we're past the tipping point because it is warming up. Those birds are migrating that are carrying it, they are leaving. So it's going to become less and less throughout the year," he said.

Konkle is also hopeful the end of the annual waterfowl migration will bring an end to new infections in the state and DATCP will be able to end its ban on poultry fairs, exhibitions and swaps that’s currently in place until the end of May.

"We're hoping that by the time fair season, the exhibition season really gets going more towards this summer in June and July that we'll be able to have those again. But we'll have to continue to reevaluate as we're still going through this outbreak," she said.

DATCP recommends that poultry owners continue to follow prevention measures like handwashing, disinfecting equipment and restricting access to their birds. Officials also recommend that new birds are separated from existing flocks for at least 30 days and all birds should be kept indoors if possible.