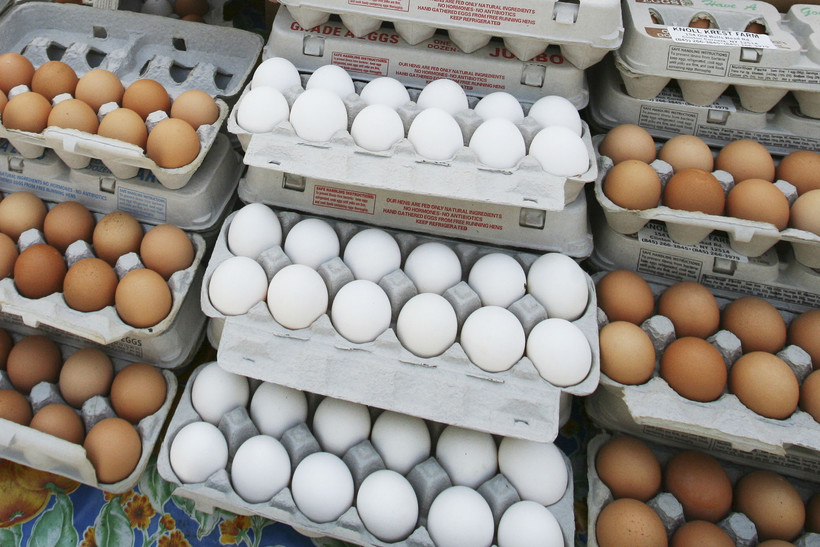 The state veterinarian with the Wisconsin Department of Agriculture, Trade, and Consumer Protection believes wild birds are the source of the highly pathogenic bird flu detected at a Jefferson County egg-laying facility and a backyard flock in Rock County.

In a virtual media briefing Wednesday, state veterinarian Dr. Darlene Konkle said they’ve been looking closely at movements and information from flock owners to determine the source of infection.

"We think each of them is introduction from a wild bird contact of some sort," Konkle said. "There is no connection between these two facilities."

Last Thursday, the Wisconsin Department of Natural Resources confirmed the virus in half a dozen wild birds across five counties, including Dane, Columbia, Grant, Milwaukee and Polk counties. Konkle said state officials are on "high alert" as birds continue their spring migration.

The detections at the commercial egg-laying facility and backyard flock are the only known cases among domestic birds in Wisconsin to date. State agriculture officials have worked with both sites to cull those flocks.

The highly contagious bird flu doesn’t pose an immediate threat to public health or threaten food safety because the virus is killed when birds or their eggs are properly handled and cooked, according to the Centers for Disease Control and Prevention. No infections among people have been reported in the U.S.

The department first discovered the highly contagious H5N1 strain on the Cold Spring Egg Farm in Palmyra on March 14. Work is ongoing to compost nearly 3 million birds culled at a nearby site. That is expected to take another week to complete and monitoring will be ongoing.

A representative of the farm declined to comment on the process, referring comments to DATCP and the U.S. Department of Agriculture.

State health and environmental regulators said during the briefing that they’re confident there’s no risk of groundwater contamination from composting the birds as neighbors have raised concerns about the process.

Natasha Gwidt, a field operations director with the DNR, said the disposal site in Palmyra fits requirements for composting related to its distance from private wells or other bodies of water. She said a 14-inch layer of carbon material is being laid on the ground, and the birds will be mixed with sawdust and other material before it’s covered by at least a foot of woody material like mulch. 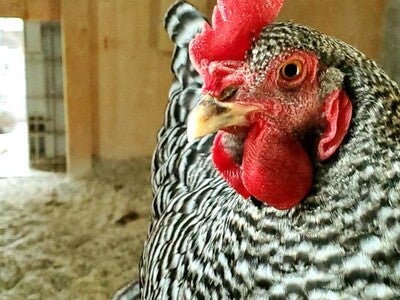 Backyard flock owners such as Atia and Amy Kampstra are taking steps to protect their nine hens like their bird RePecka Lynde from the highly contagious bird flu strain that's circulating across the United States. Photo courtesy of Amy Kampstra

"It really encapsulates the bird carcasses inside of that compost site," Gwidt said. "We won't get, and we don't want to get, any sort of runoff or water or any leaching coming out of those compost piles. That woody material should absorb that."

The DNR has been working with the Wisconsin Department of Health Services to provide testing kits to nearby well owners and advising them on what to monitor.

"We have a lot of confidence and know how (the) DNR put the compost piles together, (and) all of the steps they took to identify proper compost areas. We're very confident that we're going to be safe," Tom Haupt, a respiratory epidemiologist with DHS, said.

In the meantime, Konkle said they’ve contacted all poultry owners in a 10-kilometer radius of the two sites, asking them to monitor birds closely. Two commercial farms within that area are doing frequent testing and have so far tested negative for the highly contagious bird flu. There are no commercial operations near the Rock County flock.

Haupt added that health officials tested several workers at the Jefferson County farm who were in the area of infected birds, but none have tested positive.

Konkle estimated it may be 60 to 80 days before the farm can restock birds. She noted cleaning, disinfection and environmental sampling need to occur to determine the virus is no longer present. 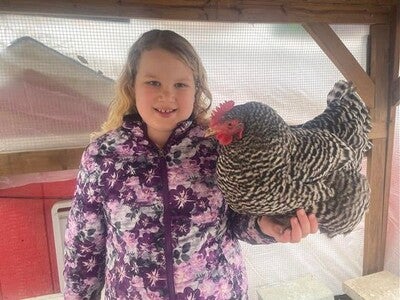 Atia Kampstra, 9, of Stratford has been taking steps to protect her backyard flock of nine hens from the highly pathogenic influenza, including her hen Honey Blossom Blackberry pictured. Photo courtesy of Amy Kampstra

Atia Kampstra, 9, and her mom Amy Kampstra have been taking steps to protect their backyard flock of nine hens in Stratford.

"They used to do supervised ranging. We're keeping them in the (chicken) run right now," Atia said.

Now, she and her mom change jackets and shoes when they’re working with the birds.

Atia always wanted a backyard flock, and she likes to cuddle with her egg-laying hens that have colorful names like Frieda Lay and Taco Bella Chickoletta. She writes a newsletter called Chicken Feed News that she shares with friends and family, including the latest news about the bird flu and tips on how to keep them safe.

Amy said they’ve been trying to minimize risk as much as possible, noting they’ve avoided putting out bird feeders or bird baths that may attract wild birds. They’re also planning to add on to their chicken run to help prevent the possibility of infection from wild bird droppings.

She said they were sad to learn that the strain had been detected at a backyard flock in Rock County.

"If you have kids, it's like their pets. It's good responsibility for them," Amy said. "I know they'd be pretty devastated if something had to happen to their flock."