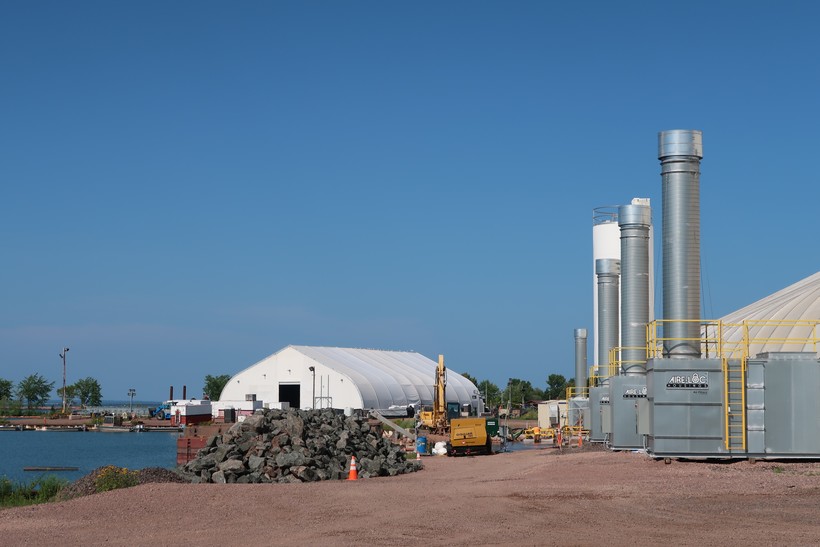 Toxic pollutants and wood waste from industry long gone once littered the shoreline along the city of Ashland. Efforts to clean up contamination on the land and within the Chequamegon Bay have been ongoing for decades.

"Over the last several years, we’ve had numerous crews and equipment and materials in that Kreher Park area and this year involved kind of restoring that area," he said.

The site includes a former manufactured gas plant on a bluff overlooking Kreher Park that’s owned by Northern States Power, a subsidiary of Xcel Energy. The plant produced fuel oil to make gas and with it came waste in the form of coal tar. Historic lumber operations and waste disposal may have also contributed to pollution at the site.

The ground was contaminated with tar, oil and chemicals like polyaromatic hydrocarbons that can cause cancer, placing subsistence fishers more at risk. People were advised against wading or swimming in the water.

The area was officially listed to the National Priorities List as a Superfund site in 2002 — a dozen years after contamination was discovered.

Now, around 148,000 cubic yards of wood, debris and sediments have been removed and treated, said Jamie Dunn, former Wisconsin Department of Natural Resources project manager of the site who has since retired. Around 50 million gallons of groundwater has been pumped and treated for metals and other chemicals, according to a review by the U.S. Environmental Protection Agency.

"There’s still an ongoing long-term water monitoring system that’s onsite so there are some wells that are doing their work to extract impacted water and treat that as they have been for many years and that will continue into the future," said Elwood.

In the past year, area on the land has been restored with clay liners and a soil cap with vegetation. A 12-foot concrete section along the shoreline in Kreher Park was also installed to help prevent erosion. Elwood said the entire cleanup cost more than $200 million, including remediation and restoration.

Xcel plans to submit a report on completion of remedial actions at the site to the EPA and Wisconsin DNR. The agencies will prepare a final report that reviews work at the site for approval, which Elwood hopes will take place sometime in 2020. Then, the company can transfer the area to the city of Ashland.

Meanwhile, the city is moving forward with plans to reclaim the area with installation of a two-bay boat launch next year, according to Sara Hudson, director of parks and recreation. The city is working with Superior-based AMI Consulting Engineers to finalize the design. Hudson said they plan to put the roughly $1.7 million project out for bids in early 2020.

"We do have to work on some agreements between the city and (Xcel) that are moderated between EPA and DNR, but it looks like next summer we will be able to start construction," Hudson said.

In 2018, she said the city received around $500,000 through a recreational boating facilities grant from the Wisconsin DNR. The city has applied for additional funding.

Hudson said it’s feels good to see work at the site coming to an end.

"It was actually really cool to ... see green grass growing at the end of the summer after they seeded the westernmost half of it and to be able to see the potential of a parkland there again," she said.