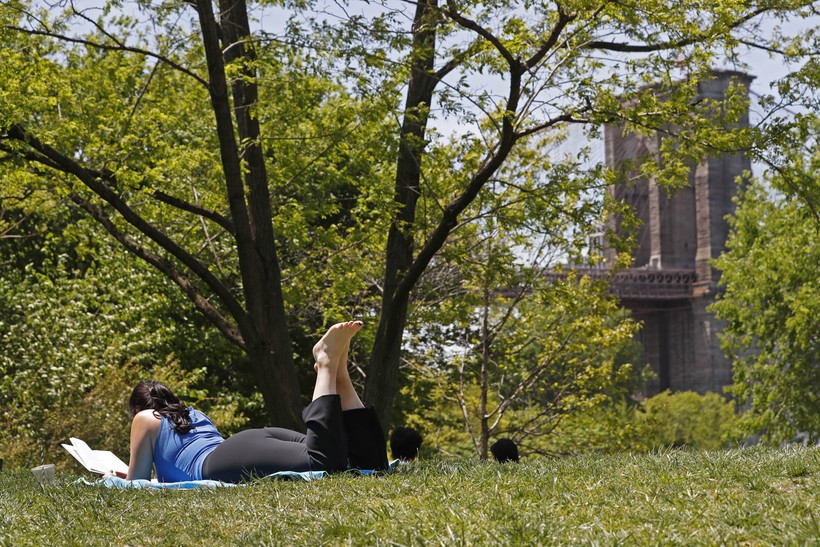 A woman reads a book while lying in the grass at Brooklyn Bridge Park during the current coronavirus outbreak, Sunday, May 17, 2020, in New York. Kathy Willens/AP Photo

Nonfiction, Fiction Book Suggestions For You
By Jill Nadeau
Share:

Some of us have a little more time on our hands these days, and what better way to fill it than with a great book?

Sam, a "Larry Meiller Show" listener, asked for recommendations of books on the great outdoors, and our wildlife writers delivered.

Dean Bortz, editor of Wisconsin Outdoor News, is a fan of Ivan Doig, an American author and novelist known for fiction and nonfiction books set mostly in his native state of Montana. Bortz recommends starting with Doig's "This House of Sky." A memoir about growing up in the American west. Below are some of his other suggestions.

Other Suggestions From Bortz:

Pat Durkin, a freelance writer and editor, and president of the Wisconsin Outdoor Communicators Association, recommended two classics. He said he was lucky to acquire them as a kid: "A Century of Wisconsin Deer," and "Bow & Arrow Big Game Hunting in Wisconsin." Both were published mid-century by Otis Bersing.

"These are rich with great information on the early deer management in Wisconsin," Durkin said.

He also suggests "The Vegetation of Wisconsin," by John T. Curtis.

"So much of the information we have on Wisconsin plants comes from this book. They are really fascinating," Durkin said.

He said many times he goes back and looks at these books and realizes many of the things we think are new were being worked on by our grandfathers, including plant ecology and deer management.

"Randy is a retired DNR (Wisconsin Department of Natural Resources) naturalist who has worked on state natural areas for many years," Eisele said. "The book takes a different approach to phenology. Instead of recording first arrivals or last departures, it focuses on when it's the best time to observe and experience natural events.

The book includes the full range of biological diversity, from lichens to mammals. Each month is divided into thirds and has a primary article featuring prominent events during that period of time. Smaller articles and snippets of events during that time are also featured.

Eisele also recommends the classic "A Sand County Almanac" by Aldo Leopold, the book many credit with launching a revolution in land management. It has sold more than 2 million copies and remains a foundational text in environmental science.

Leopold is considered the father of wildlife ecology and spent most of his life in Wisconsin. He is best know for the idea of an ethical, caring relationship between people and nature.

Dan Small, a host and producer of the public television show, "Outdoor Wisconsin," and contributing editor of Wisconsin Outdoor News, recommends two books that are compilations of the columns by Gordon MacQuarrie, outdoor editor for the Milwaukee Journal from 1936 to 1956. The books — "Right Off the Reel" and "Dogs, Drink & Other Drivel" — are published by, and raise money for, the Barnes Area Historical Association.

One of Small’s other favorites is "Letters from Art: Art Hawkins Standing Tall in the Shadow of Aldo Leopold" by Ken Blomberg. Hawkins was one of Leopold’s graduate students. The book examines letters between the two and shows the role Leopold played in molding his students and the evolution of his thinking.