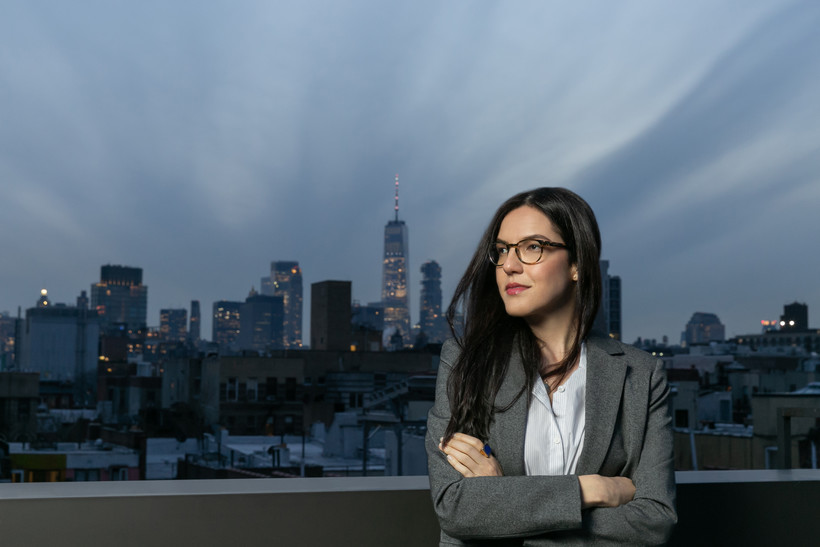 Sloane Crosley is the author of three essay collections and two novels. She has an uncanny gift for writing funny dialogue — very funny dialogue. But you don't have to take our word for it.

The great comedian Steve Martin said this about Crosley's essay collection, "Look Alive Out There": "Sloane Crosley does the impossible. She stays consistently funny and delivers a book that is alive and jumping."

Crosley's latest novel is called "Cult Classic." It focuses on a 37-year-old woman named Lola who keeps bumping into her ex-boyfriends in a five-block radius in downtown New York City. And as it turns out, Lola's former boss Clive Glenn has something to do with these supposedly random encounters.

"They're just sort of well-trodden," she said. "And I finally thought, you know, this is insane. I'm avoiding writing about something I really care about that takes up most of my brain, the brains of everyone I've ever met because I'm worried about response, or I'm worried about being pigeonholed as a certain kind of writer."

So, Crosley said she just waited "like a tiny, tiny little baby cobra snake until I could sink my teeth into a hopefully creative way to tell a romantic New York story."

In "Cult Classic," Lola's encounters with her former lovers occur whenever and only when she's within a five-block radius of what Crosley describes as a "cult-like institution" called Golconda. It's named after the 1953 painting by the Belgian surrealist artist René Magritte.

These encounters with previous boyfriends aren't random, and in fact, are set up as sort of a social experiment that's supposed to encourage Lola to put the past to bed and look ahead to marrying her fiancé, Boots, whom she loves.

"So, if you imagine picking up your phone right now and scrolling through and looking at text messages — be they with friends or former lovers or even current people you once fought with — from 2013, you would be sort of sucked back into that moment and to those emotions or those memories would become emotions again. And so that's sort of what happens to her (in real life) as it were. She gets very confused," Crosley says.

The puppet master behind these seemingly chance encounters is Clive, who used to run a magazine called Modern Psychology, for which Lola worked as deputy editor.

"Clive is this larger-than-life figure, a cult of personality, if you will, who, when he was running this magazine before it folded, became this sort of cult pop psych guru kind of person," Crosley explains.

Clive had his own podcast. He created a drinking game based off of the Diagnostic and Statistical Manual of Mental Disorders. And, he started an experiment in mind control and ropes Lola along for the ride.

He becomes convinced, Crosley explains, that he can control the movement of Lola's exes and directs them into her path.

"He literally is just sort of harnessing the wellness movement and technology and creating these packages for people with the intent of getting them over their romantic past in various different ways," Crosley said.

It's "grand speculative fiction," Crosley said of the way it comes across in the book. But she said real life isn't too far from that fiction, "through social media, through the power of suggestion, through manipulating Google search results — just sort of basic techniques combined with a little bit of old-fashioned group meditation."

In the book, Crosley said this experience costs $250,000. In real life, with the help of the internet and maybe your Instagram password, she thinks she could pull off something similar for $50.

"I think I could put you and someone you don't necessarily want to see in a restaurant tonight," she said.

So, has writing "Cult Classic" changed the way Crosley thinks about her own ex-boyfriends?

"I do think that even with the ones that I found, who behaved in a way that I found to be unconscionable, the ones that I hurt, the ones that hurt me — there's sort of a beauty in the fact that we all landed here in the same city at the same time. It's kind of unbelievable. And you can't help but love them a little bit, even the terrible ones," she said.

Crosley said she and Lola aren't the same, but there are some exaggerated similarities.

"Hopefully I took every sort of bad quality I have and just sort of cranked it up as high as the dial would go. But inadvertently, it's made me feel a lot warmer towards everyone I've ever known," she said.

Crosley is currently working on a screenplay. At least when she's not chatting with "BETA": "I'm so excited to talk to you guys. And you're also just holding it up. You know, I could be working on it right now," she said, a little tongue-in-cheek.

She's hopeful the care she's put into the screenplay dialogue will come across the same way it has for the novel.

"It's great because it's a whole different way to tell a story that I still care about," she said.

"Cult Classic" will stream on Apple TV+. The air date has yet to be decided.