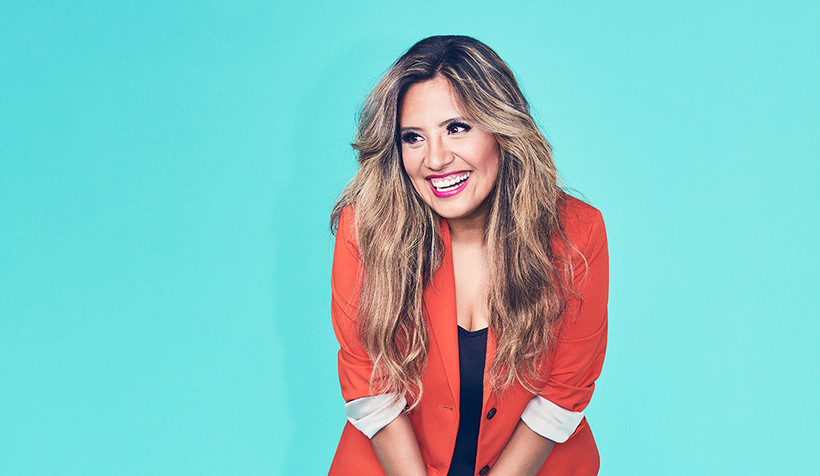 The 'Cristela' And 'Cars 3' Star On Her Incredible Journey From Poverty To Pixar And Beyond
By Adam Friedrich
Share:

Cristela Alonzo's life story is so incredible that it has already been loosely adapted into an ABC sitcom ("Cristela") and mined for a backstory to her character of Cruz Ramirez in Pixar's "Cars 3." Now, in her memoir "Music To My Years," the actress and comedian has added her own soundtrack to it so to speak.

Alonzo writes about her rise from living in an abandoned diner in a rural town in Texas' Rio Grande Valley to her trailblazing career as a Latina in Hollywood against the backdrop of a personal playlist of seminal songs that still move her today.

She joined WPR's "BETA" to talk about her career and why she considers music to be like an extended member of her family.

"It's this weird thing where my mom grew up in a very kind of like submissive family where women were always seen submissive to men. And I always found it interesting that with her, sometimes she couldn't vocalize what she wanted to say, but then she'd play a song and you kind of knew what she was trying to express at that moment," Alonzo recalled.

Alonzo's mother would become a towering figure (and frequent comedic target) in her life and a lasting inspiration. As the youngest sibling of four, Cristela was the only one who was first-generation American. She would learn English by watching American TV and translating the nightly news to her mom.

"That's a skill that a lot of kids of immigrants have," Alonzo said. "I had to get on a different grade level than everybody I was going to school with. I had to learn about politics and world events as they were happening, trying to explain them as I was learning the words. So it was really hard. And sometimes I think it would make sense to her and sometimes it wouldn't, and I think she kind of just appreciated the effort."

At the same time, Alonzo fell in love with American sitcoms, especially NBC's "The Golden Girls". She still holds a passionate fandom today. She says "Golden Girls" resonated with her so much because she saw her own relationship with her mother reflected back through the mother/daughter duo of Dorothy Zbornak (Bea Arthur) and Sophia Petrillo (Estelle Getty).

"You have an immigrant mother and her first-generation daughter. It's Sophia and Dorothy and it always bothers me that people don't talk about that angle enough. You know, it's the same situation I had with my mother, but because Sophia is white and she's from Italy, we just tend to not even think about the fact that she's an immigrant," Alonzo said.

That lack of representation is something Alonzo herself would remedy years later in her very own sitcom, but as a child she found a lot of inspiration from the life and story of "The Queen of Tejano Music," the late Selena Quintanilla-Pérez.

Selena herself was a Mexican-American who grew up just hours from Alonzo in Texas, but whose life was tragically cut short. Her song "Dreaming Of You" left an indelible mark on Alonzo's life. She said that hearing it even today supersedes any emotional mood she may be in and supplants it with a bittersweet hope.

"When we talk about Selena, we'll always mention her hits in Spanish, and for me, 'Dreaming Of You', that was going to be one of her first hits and one of her first songs in English. That was such a big deal. We were finally going to show people the specialness of this icon that we all loved," Alonzo said.

Alonzo herself developed a passion for acting and enrolled in the drama club in high school, eventually leading it. She had plans to pursue acting in college until a fateful conversation with an academic.

"My goal in life was to always be on Broadway. I loved Broadway. My entire childhood was devoted to getting on Broadway," Alonzo said.

Alonzo put her love and talent for performing into another platform: standup comedy.

"The only way that I would ever get a chance was to write my own stuff. And that's how it switched into standup," she said.

Grieving the recent loss of her mother, Alonzo began to write material about their relationship and the humor innate to straddling two cultures. Her audiences began to relate to it and it would eventually lead to the ABC sitcom, "Cristela," in 2014 that showed the story of Alonzo moving in with her sister and mother.

"When I was pitching the show, I was pitching a show about my life at that point where we were all so crowded in a house trying to make it, trying to survive in a way, and those times, they were some of my best memories," Alonzo said. "I want to show how you could be happy with not having this, like, wealthy family on TV. And also, I wanted to lead up to my mother's death because I actually thought it was important to show that these memories we were making were actually leading up to this moment that we would cherish our entire lives."

ABC executives squashed the death storyline and ended up canceling "Cristela" after 22 episodes. The reasons why remain murky, but Alonzo is pretty sure it was to get her to move to their daytime talk show, "The View" — which she was guest hosting during off weeks — permanently. After she declined their offer, executives offered her a chance to launch a new show.

Instead, Alonzo's agent would send her to the Pixar campus where — in a misunderstanding perfectly suited for her beloved sitcom form — Cristela thought she was simply just touring the facilities. After learning that she was actually there to audition for a small role in their upcoming film, "Cars 3", Alonzo impressed the creators so much that the role of Cruz Ramirez grew into the co-lead. Furthermore, they created Cruz's backstory from so many elements of Alonzo's personal story.

"I went into the booth and it started out as a small part. But then they would fly me up to Pixar to do these voiceover sessions at the studio and between breaks and lunch, I would tell them stories about how I grew up and they loved so many of those stories that they made them into Cruz's stories. So the character Cruz is actually inspired by a lot of my childhood and a lot of my issues, which is so weird to see me so represented. Like that character is me."

Alonzo keeps busy today with her podcast "To Be Continued" and continues to be an advocate in promoting Latinas and other women in the writers rooms of television and film.