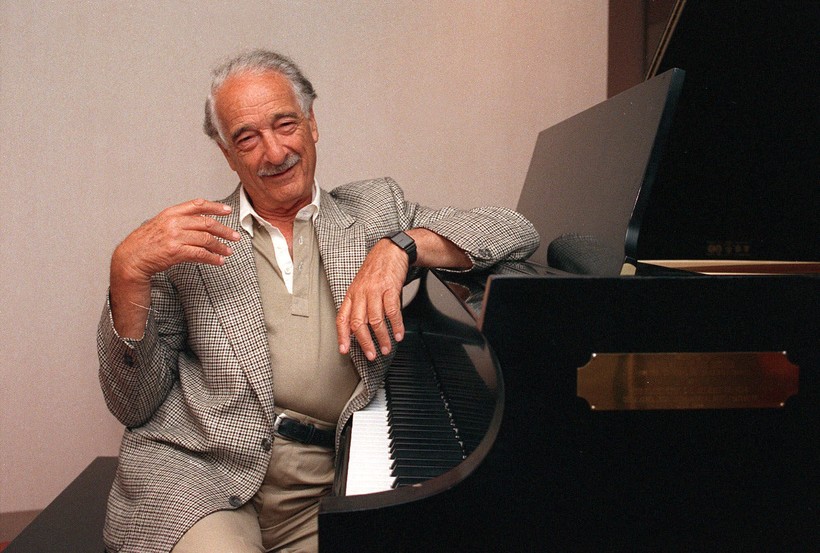 Pianist and humorist Victor Borge poses in his dressing room at the Wolf Trap in Vienna, Va., on June 8, 1989. AP Photo

In honor of April Fools' Day, WPR's music staff had fun putting together a collection of personal — quirky favorites. The songs range from comical melodies to subversive jokes. Enjoy!

As an 11-year-old, I thought it was hilarious! I was singing with the Swansonettes, a small, junior-high ensemble that performed everything from John Denver folk songs to traditional spirituals.

It was my first introduction to the clever parodies of P.D.Q. Bach (aka. Peter Schikele.): "My bonnie lass she smelleth, making the flowers jealouth ... she looketh like a jewel and soundeth like a mule."

On stage for the show, the whole group snickered and laughed and really hammed it up! It was great fun, and while it ended up being just the first of many P.D.Q. Bach parodies I performed over the years, it will always be my favorite.

The British comedy duo of lyricist Michael Flanders and composer Donald Swann began writing songs and light opera in 1948. Eight years into their partnership, they created a two-man review of some of their songs, interspersed with their own comments and observances, called "At The Drop Of A Hat."

For two years, their wit and whimsy was displayed in London's West End through such memorable ditties as "The Hippopotamus Song" ("Mud! Mud! Glorious Mud!") and "Madeira, M'Dear?" before coming to Broadway for over 200 performances.

They dropped "Another" hat in 1963, and took it on a bit of a world tour before returning to Broadway in 1967. That review included one memorable melody that they didn't write, but gleefully pilfered. Adding a lament for a stolen instrument to the note-for-note-including-the-cadenza Rondo finale of Mozart's "Horn Concerto #4," they christened their creation "Ill Wind." It became one of the highlights of the review for the duo, and pops up more than occasionally in intimate concert settings today.

Considering the number of jokes that Mozart wrote into the original concertos, dedicated to his good friend Joseph Leutgeb, I have no doubt that he would be delighted at the embellishment. I was dropped into the world of Flanders and Swann when I was a freshman in college, and since then have never been able to hear a performance of the concerto without singing along in my head.

Performed before a live audience in 1960, "One More Dance" is the title of a romantic yet humorously rendered duet featuring the voices of the late Miriam Makeba (aka "Mama Africa") and Harry Belafonte, the legendary calypsonian performer.

From the outset, Makeba playing the part of Darling is quite enamored with Belafonte in the role of Franz. Darling longs for just one more dance with her passing love interest despite knowing that her husband is ill at home.

Franz does his best (considering the setting) to convince Darling she should "go home to her poor old man." However, Darling insists on one more dance with Franz before leaving even after she learns that her "old man" has died.

Each time I hear this recording, I can't help but chuckle at its operatic-like plot steeped in a light-hearted embrace of a socially ticklish rendezvous, even as the death of a husband draws near.

Wedded to the idea of April Fools' Day, maybe, just maybe, the poor old man had the last laugh after all.

In the course of two days in 1923, Paul Hindemith wrote a deliciously bad six-movement serenade for string quartet called Minimax.

The suite's satire of military-band music invites a variety of visual tricks. (During one Madison performance, the violist balanced his bow on the tip of his nose).

And it's full of musical and verbal puns. For example, the finale wreaks havoc with the march "Alte Kamaraden" (Old Comrades), which it retitles "Alte Karbonaden," meaning "Leftover Spare Ribs."

Minimax is the work of an ingenious composer who combined consummate craft with a keen sense of humor.

The Kronos Quartet does an over-the-top send-up of it in this YouTube video:

Lou and Peter Berryman have been having a musical conversation for more than 40 years as one of Wisconsin’s most-beloved folk duos.

With Lou writing the music and Peter penning the lyrics, they're best known for their humorous songs. But they actually cover a wide variety of topics, often mixing in poignant and thought-provoking lyrics and music with their comedy.

As Peter said in a 2011 "Simply Folk" interview: "I like to write often with the same kind of content that a conversation has. Conversations go from something very serious and heavy immediately to a joke or something local or unusual. They bounce around."

One of my favorite songs of theirs is the tune, "Your State's Name Here." It pokes fun at the musical cliche of writing about where a person grew up, but it also touches on the universal connection to a sense of home.

Not only does this song feature some of their wittiest lyrics, it also highlights the timing they've developed as a musical duo over the years. Good comedy needs good timing, but doubly so for musical comedy. And the Berrymans have honed their craft well.

If you're looking to be amused on April Fools' Day, how about a classical-music parody of a Mozart opera?

One joker who delighted audiences of all ages was the beloved Victor Borge. In this video, the classically trained pianist takes all the individual parts and gives his own humorous twist to them.

On April Fools' Day, we think of certain works by famous composers that are legendary because of their ironic or possibly humorous "extra-musical" intentions. Typically, they also include a practical point or two to be considered.

Shostakovich wrote his "5th Symphony" in 1936-'37, a time when Russians were subjected to extreme repressive strictures imposed by the Stalin regime. He had been rebuked by Soviet authorities for a recently premiered opera, and his response was to write his symphony as "a Soviet artist's response to justified criticism."

Shostakovich and his audiences had the last laugh as he gave them an outlet for their sorrow while appeasing the Soviet authorities who were apparently insensitive to some of the zingers in the music aimed at them by the composer.

The second movement is a prime example. It's a waltz, a form approved by the Stalinist guidelines, and much in keeping with the great waltz tradition of previous Russian composers, but it's a sarcastic waltz in which Shostakovich thumbs his nose at the oblivious authorities.