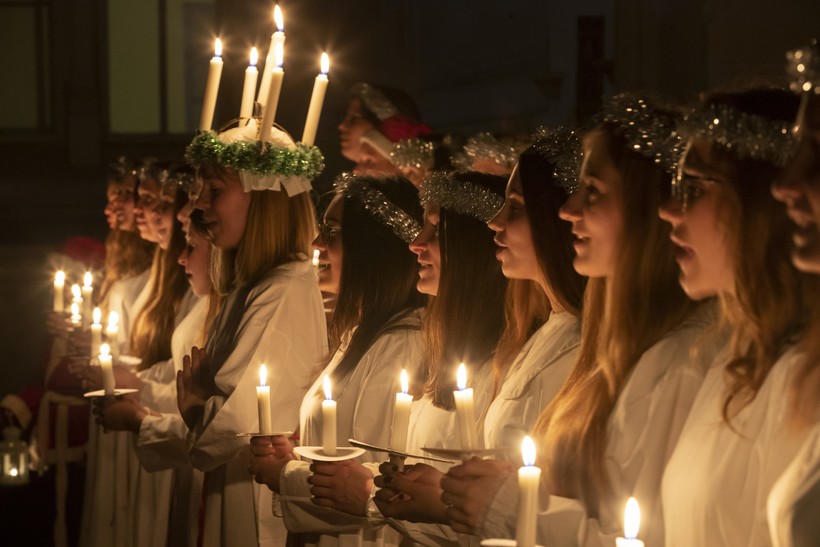 Young women sing carols as they hold candles to celebrate St. Lucia's Day in the Evangelical Lutheran Church of Saint Katarina in St.Petersburg, Russia, Thursday, Dec. 13, 2018. The Church was built in the 19th century by and for Swedish expatriates in Saint Petersburg, and it is usually called the Swedish church. In Soviet era the Church used as a sport hall. St. Lucia is the patron saint of vision. Dmitri Lovetsky/AP Photo

The WPR music hosts love sharing holiday music with listeners each season. They also have their own favorites — including recordings with meaningful associations. Some of these might become new favorites for you!

My favorite Christmas recording of all time features the Choir of King’s College Cambridge singing carols in that magnificent 15th century Gothic chapel.

It starts out gently with the inimitable sound of a young boy soprano singing the first verse of "Once in Royal David’s City." It’s the traditional opener for the annual Festival of Nine Lessons and Carols service, broadcast live around the world on Christmas Eve. (WPR carries this every year.)

The organ and choir join on the next verse as they start down the aisle, and the procession gets closer and closer and louder and louder. The carol culminates on the last verse as the youngest voices soar over the rest of the choir with a stunning descant composed by Sir David Willcocks, their longtime conductor.

It chokes me up every time, and the rest of the recording is equally powerful — full of great traditional carols with even more soaring descants that lift minds and spirits along with them.

Listening is especially meaningful because I had the chance to sing under Willcocks in a choir workshop — he was like a sprightly elf, utterly bursting with positive energy, incredible musicianship and an ear that didn’t miss a thing. I envision him leading this choir with love and deep attention, yielding the extraordinary results captured on this recording.

As someone who has had the good fortune to sing under the direction of Margaret Hawkins, long-time choral director for the Milwaukee Symphony Orchestra, my December is full of works for the chamber choir that I came to know through years of performances at St. John’s Cathedral in downtown Milwaukee.

My favorite, by far, is the Saint-Saens "Christmas Oratorio" of 1858, which the composer, a 23-year-old organist at Paris’ Madeleine Church, wrote in under two weeks.

Its 10 movements are set in a mostly light, lyrical style, although there are a few agitated minutes in the sixth movement as we wonder, "Why do the nations rage?" before a gently calm Doxology helps restore faith. The final "Tollite hostias" is a buoyant hymn of praise of all creation, bringing voices of Heaven and Earth together in a sweetly affirmative Alleluia.

This may lack the drama of Handel’s "Messiah," but I adore how this makes the Christmas story a very personal and contemplative experience.

Ten years ago, Tom Martin-Erickson brought us a wonderful recording by L’Arpa Festante and the Bach Choir of Mainz, after he heard them perform in Munich.  This performance from Danish musicians is almost as good!

For Solstice celebrations of light returning to a dark world, I turn to the Canadian ensemble Jaiya, and their 2003 CD called "Firedance."

Here, world-fusion is a combination of harp, accordion, guitar and percussion to accompany vocal arrangements of Hebridean folk songs, English carols from the 15th through the 18th centuries, and original songs.

Lael Whitehead based "Yule Is Come" on a medieval Latin chant, which you hear a cappella at the beginning of the track.

One of my most vivid musical memories came 40 years ago this month.

I had just moved to Chicago after growing up, graduating college and beginning my career in three eastern cities. One of my first experiences at my new job at WTTW, Chicago’s PBS station, was to be present for our videotaping of "The Do-It-Yourself Messiah" with members of The Chicago Symphony Orchestra, and nearly 2,500 singers who filled Orchestra Hall that evening under the direction of the late Margaret Hillis, founder of The Chicago Symphony Chorus.

I was awestruck by the first notes of the first chorus: hundreds of altos singing, "And the glory, the glory of the Lord..." followed a few seconds later by about 2,000 sopranos, tenors and basses.

Of course I enjoyed participating in the rest of Messiah, but those first few seconds are indelible in my memory.

The 100th anniversary of the end of World War I took place earlier this year on Nov. 11. Many historians consider this to be the first war fought with "modern," mechanized methods, resulting in the deaths of tens of millions of people.

In the midst of that horror, a story emerged of hope and peace, with soldiers from both the Allied and German forces taking part in an informal Christmas truce at various points along the front lines in 1914.

That moment of history has been told through many different songs, but one of my favorite is this piece by John McCutcheon, "Christmas in the Trenches." In a time when people across the world are caught in the grip of violence, I hope this song brings you a bit of inspiration and hope in this season of peace.

As we observe the bicentennial of "Stille Nacht," best known as "Silent Night," it’s fun to tap into this collection of carols performed by the Taverner Consort and Choir.

It includes the original, lilting up-tempo guitar-accompanied version of the Christmas classic, but also a wide-ranging smorgasbord of Christmas songs and styles through the centuries. Some of the songs, authentic as they are, may startle you!

In today’s din of conflict and division, is there anything on Earth that could inspire us to agree, even for five minutes and six seconds? Perhaps an Aramaic psalm, echoing a Muslim call to prayer, sung by an Orthodox Christian martial artist for the Roman Catholic pope.

Before taking vows, Rev. Serafim Bit-Kharabi used to provide personal security for members of the Ukrainian parliament. Now he leads a Georgian Orthodox congregation in Aramaic, the tongue widely believed to have been Jesus' home language.

On Oct.1, 2016, Bit-Kharabi and a young parishioner had the honor of singing the Aramaic "Psalm 53" for Pope Francis when he visited Svetitskhoveli Cathedral in Qanda, the Republic of Georgia.

I’ve shown the performance to many people, most recently two close friends — one ex-Muslim, one ex-Christian, both fervent atheists — and both wept.

Note that the YouTube title references "The Our Father," but the piece is in fact "Psalm 53."