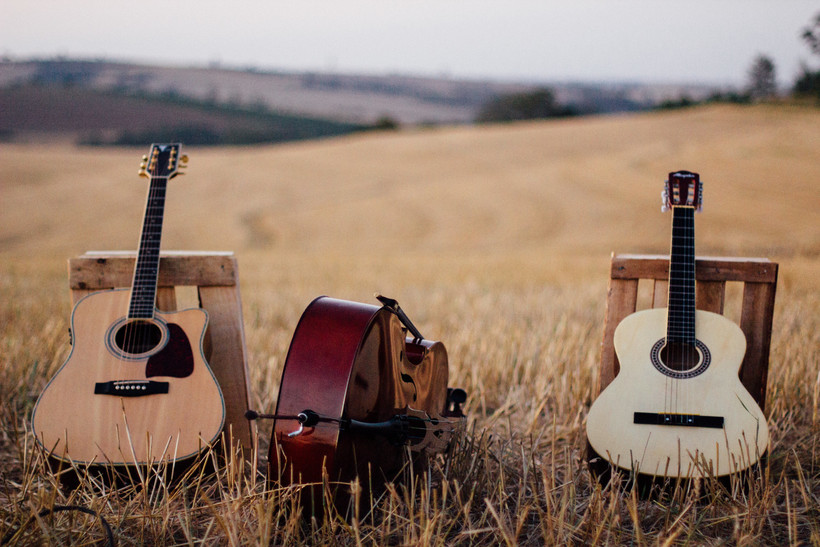 From A 13th Century Round To A Classic Of The American Songbook, Music That Evokes The Season
By WPR Music Staff
Share:

Now that summer is finally here, the WPR music staff has put together a collection of music that evokes the warm summer months. The range is wide, covering over 800 years, including some well-known favorites plus some pieces that might be new discoveries for you. There are also two versions of a popular American song, and something just right for Independence Day.

The oldest surviving round in English (Middle English) is "Summer is Icumen In," which was composed in the Wessex dialect around the year 1260.

It may have been written by William de Wycombe, who was a 13th century composer and copyist. A round is a simple form of canon in which three or more singers begin a song at different times so that different parts of the melody coincide in the different voices, but still fit harmoniously together. Other examples are "Row, Row, Row Your Boat," "Three Blind Mice," and even "God Only Knows" by the Beach Boys.

Among the performers in this recording of "Summer Is Icumen In" is the Hilliard Ensemble:

Although the word summer is not in the title, when I hear the pastoral suite for flute, string orchestra and harp by the 20th century Swedish composer Gunnar de Frumerie, it transports me to an imaginary place in the countryside — a lush landscape surrounded by hills, flowers, and a river. There is a gentle breeze, the sky is clear and blue. It’s a lovely sunny summer day.

The opening preludium is stately and lyrical, and sets the stage for what’s to come — a set of dances beginning with a spirited gavotte, followed by a reflective, easygoing sarabande. The siciliano continues the journey through the picturesque terrain and leads us to the lively finale.

Summer in Wisconsin brings hot, sultry weather that eventually yields to powerful thunderstorms scudding in over the Mississippi.

Sometimes the heat wave is broken by ominous cumulonimbus towers that coalesce right on the spot, releasing a few loud, heavy drops before the full-blown downpour lets loose.

Many composers over the centuries have emulated thunderstorms in music; perhaps the most famous examples are found in Vivaldi’s "Four Seasons" – there’s one each in "Spring" and "Summer."

One of the most artful, vivid and meaningful examples of a musical thunderstorm is "Cloudburst" by American composer Eric Whitacre. The piece was inspired both by an actual storm and by the poetry of Mexican poet Octavio Paz: “ We must dream the dreams of a river seeking its course."

"Cloudburst" is for eight-part mixed chorus plus thunder sheets, handbells, bass drum, wind chimes, piano and more. The chorus uses body percussion to imitate those first splatting raindrops and the effect is surprisingly realistic and powerful.

The musical storm intensifies and then ebbs, slowly receding. The listener is cleansed, cooled and utterly refreshed in more than one way.

I can’t think of a more iconic composition wedded to the season of summer than the aria "Summertime" from George Gershwin’s opera "Porgy and Bess." Since my earliest days as a voice major at San Francisco State University, this has remained among my favorite operatic productions as both an iconic American opera, and a celebration of African American culture.

Back then, I searched for professional operatic role models that "looked" like me. Over time I started including selected songs from "Porgy and Bess" in my required recital. And though my fond embrace of "Summertime" continues, my sentiments have evolved and remain conflicted. No longer do I view it, or rather listen to it, as merely a great piece of musical art. Why is that?

For me, it’s the opera’s employment of negative racial stereotypes linked to Bess, a black woman portrayed as a "worldly" figure. The character Porgy lives in a slum and begs on the street. Crown, Bess' lover, is a violent and controlling figure. Even the character Sportin' Life's role delves deep into some of the worst and lingering derogatory images of black men as pimps and hustlers.

Now, I admit that historically, the fate of lead roles performed by women in opera typically don’t "end well." And alongside being exceedingly cunning heroines, queens, conquerors, and the like, women characters often die in the most exact convention of Romantic opera, right?

So, maybe the offstage backdrop of segregation across America in the 1930s (and still today) adds to my conflicted feelings. And yet, when I hear Leontyne Price sing "Summertime," my mood routinely moves my admittedly shaky ambivalence to one of utter joy and infatuation with the warmth of her rich and lyrical voice. In the end, I’m reminded to embrace beauty where I find it, in spite of and not because of perceptions including the one that summer here in Wisconsin sometimes feels like it may in fact not arrive until fall!

The folk genre covers a wide array of musical styles, and offers a far different take on Gershwin's "Summertime"

Doc Watson made this one of his standard songs, and this version includes a bonus with his son Merle Watson playing lead guitar on this performance for PBS' "Austin City Limits" in 1978. Doc passed away in 2012, while Merle died in 1985 at the age of 36. Their music and memory lives on through these recordings and the annual Merlefest, an American roots music festival that takes place annually in North Carolina.

We’ll leave you with a march by John Philip Sousa, whose marches can be heard year-round, but especially on Independence Day, and none more than "The Stars and Stripes Forever."

Sousa wrote the march on Christmas Day, 1896. It was first performed the following summer, and has been popular ever since. This even became official in 1987, when an act of Congress named it the country’s national march.

Here’s a performance by the United States Army Band: