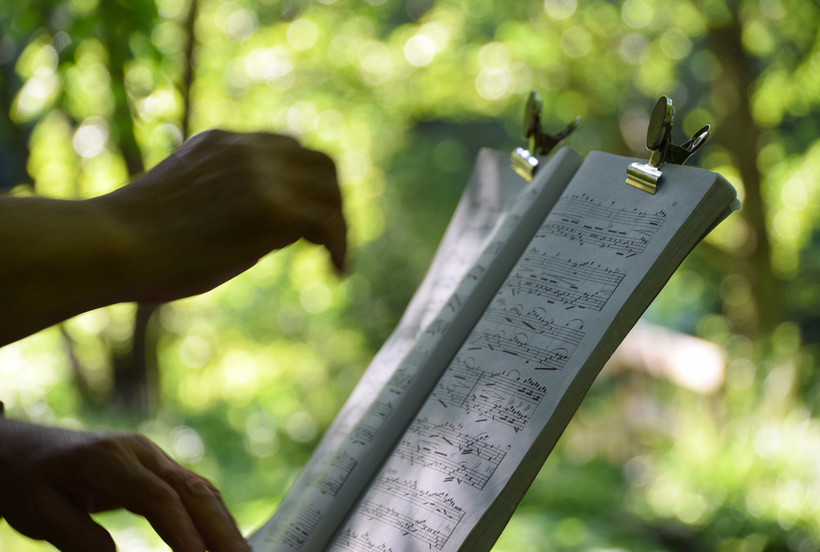 The song has become an anthem in folk circles worldwide, and through the power of music the Diggers’ ideals continue to bring people together in defense of the earth, human rights and the common good. Maria Eklind (CC-BY-SA)

At a recent WPR music staff meeting we talked about the many ways music can unite us, and about how music can express the gratitude we feel for people and things that are important to us, often much better than words.

That discussion led to this collection of music which we wanted to share with you. It’s eclectic and interesting, just like our music staff.

It is strange how the shared experience of the coronavirus pandemic can unite us in a time of seeming great divisions. Yet, a common experience, whether it be one of joy or sorrow, triumph or struggle, can remind us of our shared humanity and community. This song and video from the group Darlingside does that for me in powerful ways both musical and visual.

In 1991, Daniel Gawthrop received a commission from Carol Hunter, the conductor of a northern Virginia community chorus called VOCE, asking for "a piece that describes the way that we, as singers, feel about music in our lives." While he recognized what was being requested, Daniel didn’t know of any poem in the English language that expressed something so specific.

Fortunately, this was something that Gawthrop had talked about, frequently, with his wife, Jane Griner. Griner had grown up in a musical household and was always very aware of the relationship that devoted musicians have to what they're creating, and who they create it with. After working through several drafts, Griner read her latest to Gawthrop over the phone. Once he got home that night, it took him all of 90 minutes to set to music her simple, honest description of "the times in our lives when nothing but music can express the intensity of what we are feeling."

My chorus, the Milwaukee Symphony Chorus, first performed "Sing Me to Heaven" at an a cappella concert in 2003; I’ve lost count of the number of times we’ve sung it since. When we do sing it, I look at the faces of those around me — some I’ve known for more than 30 years — and marvel at the gifts we give one another through the work of rehearsals, and the revelation of performance.

When we were talking about sharing music that honors the extraordinary courage of those serving the community during this difficult time, I immediately thought of the Israeli folk song "Eli Eli." I first learned it as a young girl in Hebrew school, and its message is as poignant today as when it was written.

The lyrics were written by the Hungarian poet and World War II resistance fighter Hannah Szenes. In 1944, at the age of 23, Szenes bravely attempted to prevent the deportation of Hungarian Jews to Auschwitz but was caught and executed by the Germans. Many years later, the Israeli composer David Zehavi set the poem to music.

The lyrics are a prayer for life. The recording I’ve chosen to share with you is an arrangement for cello and piano featuring cellist Amit Peled and pianist Eli Kalman.

My God, My God, I pray that these things never end,

The sand and the sea,

The rustle of the waters,

Lightning of the Heavens,

The prayer of Man.

Peter Tchaikovsky had a tough time of things emotionally. He was a gay man at a time and place in which that was unacceptable, illegal and downright dangerous: 19th century Russia. He fought against his nature, even incorporated it into his music, and had a short-lived and disastrous marriage followed by a nervous breakdown.

Tchaikovsky was also very shy and insecure, often second-guessing compositions that are now recognized as the product of genius. But he was able to find hope and inspiration in some of the composers who came before him, especially Wolfgang Amadeus Mozart.

Tchaikovsky perceived Mozart’s music as inspiring love, even referring to him in a diary entry as a "musical Christ."

To celebrate the 100th anniversary of Mozart's opera "Don Giovanni," Tchaikovsky crafted a stunning orchestral suite in homage: The first two movements are based on Mozart piano works and the third one is called "Preghiera" (Prayer), based on Franz Liszt’s transcription of Mozart's sacred choral work, "Ave Verum Corpus." The final movement comes from a set of variations that Mozart wrote on a theme of Christoph Willibald Gluck.

Officially it’s the Orchestral Suite No. 4, "Mozartiana." At an emotional level it’s filled with love, respect and gratitude. At a musical level it’s brilliant — one hears the influence of three other composers, but it’s undeniably Tchaikovsky, in a deft synthesis that’s beautiful and uplifting.

Tchaikovsky didn’t second guess this piece and was even confident enough to conduct the premiere. And with good reason — his homage to a composer whose music embodied love provides exactly that, along with pleasure and beauty. It can truly be a comfort to all who are having a tough time of things emotionally.

My first year as a voice student at San Francisco State University was a remarkable one for several reasons, most of which I will set aside for now, though two are worth mentioning. One, being accepted into the chamber choir and the other, my introduction at our first rehearsal to English composer Benjamin Britten's celebrated choral work, "Hymn to St. Cecilia, Op. 27."

With the Vietnam War lingering in the background of daily life coupled with a constant fear of being drafted into it, music became both a respite from my worries and a welcomed distraction. Learning that Britten's piece may have been influenced by his contrasting pacifist ideals set amid World War II caught my attention. I remember even today how affirming, new, optimistic and grounded the lyrics sounded back then.

When discovering why and to whom the choral work was dedicated, I became elated to meet Cecilia, a notable Roman martyr honored over the years with many musical tributes even if her life and death story is, in part, one of fiction. The lyrics by British American poet W. H. Auden are end-to-end illumed by passages that stimulate the human spirit.

The work's shifting moods from sadness to rejoicing ring throughout. However, it is the lyrics and music of the third movement, "Into a world of truths that never change; restore our fallen day; O rearrange ... O wear your tribulation like a rose" that gives the work a heightened majestic feel.

The Cambridge Singers conducted by John Rutter is a rewarding listening experience.

Separation inspired a teenaged Johann Sebastian Bach to write what would be his only piece of program music. His "Capriccio on the Departure of a Beloved Brother" follows closely the farewell to someone close to him. Probably a boyhood friend, oboist Georg Erdmann.

They parted ways in 1702 when Bach moved back to Thuringia from Lueneburg and Erdmann left for parts unknown.

In the capriccio’s six movements:

This is the "Capriccio on the Departure of a Beloved Brother" played by harpsichordist Rinaldo Alessandrini:

The first thought that came to me was 500 years of church music that celebrates or laments historic religious events and deities. Maybe that’s because Easter is still fresh in my memory (think Bach, Handel and others). And many if not most of the composers from the 18th, 19th and 20th centuries wrote — sometimes on commission — celebratory pieces: Beethoven's "Consecration of the House Overture," Brahms' "Academic Festival Overture" and many more. Dozens of John Philip Sousa’s marches celebrated someone or something patriotic.

Here in the 21st Century, we have John Williams, best known for his movie scores, but also for fanfares and other music that heralds the Olympics. In 2009, we heard for the first time his quartet "Air and Simple Gifts" arranged for the inauguration of President Barack Obama. What could have been more appropriate, more American?

The quartet is based on the famous Shaker song "Simple Gifts" with its profound statement of values and was played by the Israeli-American violinist Itzhak Perlman, cellist Yo-Yo Ma of Chinese descent, Chicago-born African American clarinetist Anthony McGill and Venezuela-born pianist Gabriela Montero. For me, it was an unforgettable musical moment in American history.

"This Earth was made a common treasury for everyone to share."

The refrain of the "Diggers’ Song" beautifully captures the spirit of what was perhaps one of the earliest back-to-the-land peace movements. Wisconsin musician Andreas Transo honors the memory of the English Diggers, many of whom lost their lives in 1649 urging an end to war and a return to farming and forestry. The song has become an anthem in folk circles worldwide, and through the power of music the Diggers’ ideals continue to bring people together in defense of the Earth, human rights and the common good.