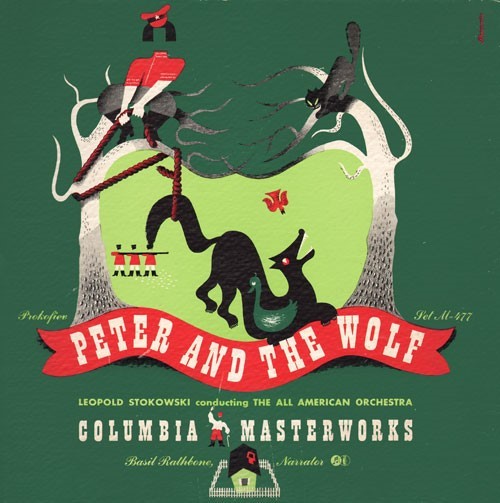 Prokofiev's "Peter and the Wolf"

The first piece of classical music I remember hearing -- and probably the first for millions of kids -- literally had an impact on me.

We had Prokofiev’s "Peter and the Wolf" on a well-worn set of three discs that spun around at the frightening speed of 78 rpm. A nick in the edge of the shellac could lop off a finger, or so it seemed to a 4-year-old. Who did the three record flips necessary to get thorugh all of Peter’s adventures, I don’t recall, but I do remember sitting on the floor and munching contentedly on Ritz crackers as the story unfolded.

The version I listened to was the 1941 Columbia Masterwoks recording. Basil Rathbone narrated and Leopold Stokwoski of "Fantasia" fame conducted. A particularly fun excerpt is from time 15:00-15:55 of this recording.

The cover art, which summarized the entire story in a single angular image, struck me as a little weird because Peter had no face (see image above).

Rathbone’s storytelling was so convincing that, for me, the wolf took on a life outside of the record-player.

One morning when I was at a friend’s house, his mother was running a vacuum cleaner over the living room rug. The dirt-devouring predator was a wolf-gray upright with a glaring yellow headlight and my friend and I raced around the room keeping ahead of it when suddenly—whack! I tripped and slammed my right eyebrow into the edge of the coffee table. Then, it was off to a new adventure — my first set of stitches.

So, my first piece of classical music really did have a lasting impact, and Basil Rathbone’s version of "Peter and the Wolf" is still my favorite.