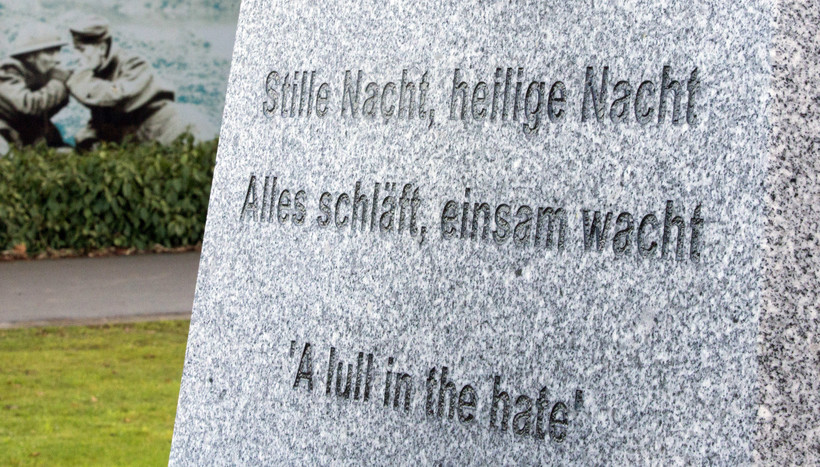 In this photo taken on Saturday, Dec. 6, 2014, the words "A lull in the hate" are inscribed on a Christmas Truce monument recently inaugurated in Messines, Belgium. Messines is one of the few sites along a nearly 500 mile Western Front where World War I soldiers from opposing sides are reported to have engaged in a friendly truce for a short period of time around the Christmas period in 1914. Virginia Mayo/AP Photo

From Folk To Country To Music For Children, Musicians Have Told The Tale
By Dan Robinson
Share:

For many, Christmas is a season of peace, and in the middle of World War I, that literally was true. During our own time, when political divisions can feel so extreme, the story of the Christmas Truce of 1914 is a welcome gift and witness of peace between supposed enemies.

The truce took place just months after the beginning of World War I. Pockets of soldiers along the front lines in Western Europe, from both sides of the conflict, laid down their weapons and enjoyed a few hours of peace and respite from the war, even mingling with each other.

Reports of the events around the truce vary a little. Some accounts have it happening on Christmas Eve, some on Christmas morning, and even some over multiple days. The truce seems to have taken place between German and British soldiers on the Western Front but not on the Eastern Front with Russian soldiers (who were on the Julian calendar at the time and would celebrate Christmas on January 7) nor with French soldiers.

A few details, however, seem consistent throughout these accounts. First, the German soldiers seem to have initiated it. Second, the singing and sharing of Christmas carols played a significant role, and at least one soccer game seems to have broken out between soldiers on both sides. Third, the Allied army officers were not happy about the truce.

Even in places where the soldiers didn’t share activities like singing and soccer, each side had an opportunity to retrieve the bodies of their soldiers who had died on the battlefield.

You can hear the voices of soldiers talking about their experience of the Christmas Truce here in this radio documentary by the BBC.

One of the best-known songs about the Christmas Truce is John McCutcheon’s "Christmas in the Trenches." Sometimes when performing the piece, he tells the story of a group of former World War I soldiers attending his concerts in Europe just to hear that song. They told him they had taken part in the Truce and were happy the story was being told to others. Here’s McCutcheon performing the song.

In her recounting of the truce, Catherine Rushton tells the story from the perspective of an individual, Pvt. Angus Turnbull. She ends the song with a rendition of "Stille Nacht" — "Silent Night" in German. In the song, Turnbull dies soon after the truce, but through Rushton’s voice we hear him say:

But don’t weep for me beneath this poppy field

For I saw paradise before I died.

The importance of the "Silent Night" is another consistent theme in the story of the truce. The joining of voices from both sides of the conflict on that song, each in their own language, helped draw the warring parties together in peace. Garth Brooks includes that detail in his version of the story, "Belleau Wood" (co-written with Joe Henry). He even ends the song with a guitar variation on the melody of "Silent Night."

And I didn’t know it then, but when I was a child, one of my favorite Christmas songs told a version of the story of the Christmas Truce... sort of. I’ll let the Royal Guardsmen fill in the rest with "Snoopy’s Christmas."

Unfortunately, efforts to re-enact then Christmas Truce failed in 1915, in part due to Allied commanders threatening punishment against anyone who took part. As the war dragged on, prospects for moments of peace like the truce faded with weariness, grief and anger.

The Christmas Truce, however, is a witness to possibility of peace, even between people trying to kill each other. One key, it seems, is to not let the violence drag on too long, to take advantage of the opportunities for peace and healing as soon as they are available, even in the face of opposition by those who would like to see the conflict continue.