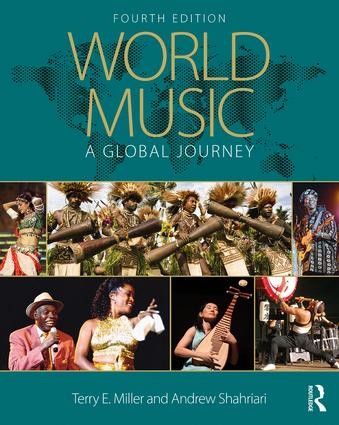 This book offers readers both listening guides and resources for instructors, and students with interest world music.  I celebrate it for its humanistic embrace of people, and their approach to music-making.  In all, this is a solid text to consider as an addition to your world music library.

World Music: A Global Journey, Fourth Edition takes students around the world to experience the diversity of musical expression and cultural traditions. It is known for its breadth in surveying the world's major cultures in a systematic study of world music within a strong pedagogical framework.

As one would prepare for any journey, each chapter starts with background preparation, reviewing the historical, cultural, and musical overview of the region. Visits to multiple "sites" within a region provide in-depth studies of varied musical traditions. Music analysis begins with an experiential "first impression" of the music, followed by an "aural analysis" of the sound and prominent musical elements. Finally, students are invited to consider the cultural connections that give the music its meaning and life.

(from the publishers) Fourth Edition features:

About the authors:
Terry E. Miller was born and raised in Dover, Ohio. His interests in both photography and covered bridges came from his father, Max T. Miller, who began photographing bridges in 1953, taking along his 8 year old son. After about 1962 the elder Miller lost interest, and Terry continued photographing, researching, building models of, and writing about covered bridges to the present. Thus far he has visited around 1000 covered bridges in the United States, Canada, Switzerland, and China. He has privately published two books on the bridges of two Ohio counties, Tuscarawas and Coshocton, based on archival research conducted in the 1960s. In 2005 he began his study of Chinese covered bridges and met Ronald G. Knapp, co-author of America's Covered Bridges, in Shouning, Fujian. That meeting led to the collaboration that produced this book, greatly enhanced by the expert photography of Knapp's photographer, A. Chester Ong.

Professionally, Miller is an ethnomusicologist specializing in the musics of Mainland Southeast Asia (especially Thailand, Laos, and Vietnam), China, and oral traditions in hymnody in the Americas, the West Indies, and the United Kingdom. He taught at Kent State University, Kent, Ohio, USA for 30 years, retiring in 2005. During his years there he founded the KSU Thai Ensemble in 1978 (which continues to this day) and the KSU Chinese Ensemble (1988-2005). Miller continues to research the musics of Thailand and Laos, spending most winters in Bangkok and traveling throughout SE Asia. He was co-editor (and a major writer) of The Garland Encyclopedia of World Music: Southeast Asia and jointly wrote a world music textbook, World Music, A Global Journey, with Andrew Shahriari. Miller lives in Kent, Ohio.