Just under 690 jobs, or roughly 15 percent of corrections officer positions, are unfilled at Wisconsin's prisons, according to data from the state Department of Corrections. The staffing shortage pushed overtime costs for salary only to $60 million last year at the Division of Adult Institutions that oversees the state's 36 correctional facilities, according to a DOC spokesperson.

The problem is most severe at Waupun Correctional Institution where 40 percent of jobs are vacant.

The DOC announced in December it was closing a cell hall and transferring more than 200 prisoners from Waupun to help relieve the staffing shortage. Figures from the agency show 119 out of 297 corrections officer positions were vacant at the prison as of Feb. 2.

In a committee hearing Wednesday, Rep. Michael Schraa, R-Oshkosh, questioned whether the situation had reached a crisis.

"I don't know how you operate a facility with half the people that you should normally have," Schraa said.

The chair of the Assembly Corrections Committee said he’s received many messages from corrections officers in his district, which includes the Waupun prison, who say they’re burning out from working long hours.

Lawmakers approved a pay bump from $16.65 per hour to $19.03 per hour for corrections officers under the current state budget that sought to address long-standing vacancies that have driven up overtime costs at state prisons. But, DOC Secretary Kevin Carr told lawmakers the wage boost isn’t on par with what corrections officers make in surrounding states.

"We still have ground to make up there," Carr said. "That impacts the overall picture throughout the agency at every facility and impacts the vacancy rates overall."

In 2019, the Evers administration approved a $5-an-hour raise for workers at a handful of correctional facilities, including Waupun, Columbia, Dodge, Green Bay and Taycheedah. Carr said the pay hike helped alleviate staffing shortages at three of the five — but not at Dodge and Waupun.

"The one that seems to historically, not just recently, but historically has been the biggest challenge to maintain a low vacancy rate is Waupun," said Carr. "I think a lot of it has to do with its age and the conditions of working there."

The COVID-19 pandemic has magnified the facility's staffing shortage at times during the last year. As of Wednesday, Waupun had 129 employees and 722 inmates who have tested positive for the virus since the beginning of the pandemic.

A quarter of the state’s 36 correctional facilities have job vacancy rates of 20 percent or more, including Taycheedah and Columbia. DOC has 1,363 vacant positions, 13.4 percent of the agency's more than 10,000 employees.

The DOC budgeted around $57.3 million for overtime costs this fiscal year, according to the nonpartisan Legislative Fiscal Bureau.

The agency is requesting around $88.3 million annually, which includes salary and fringe benefits, under the next state budget due to an expected increase in overtime costs and compensation. 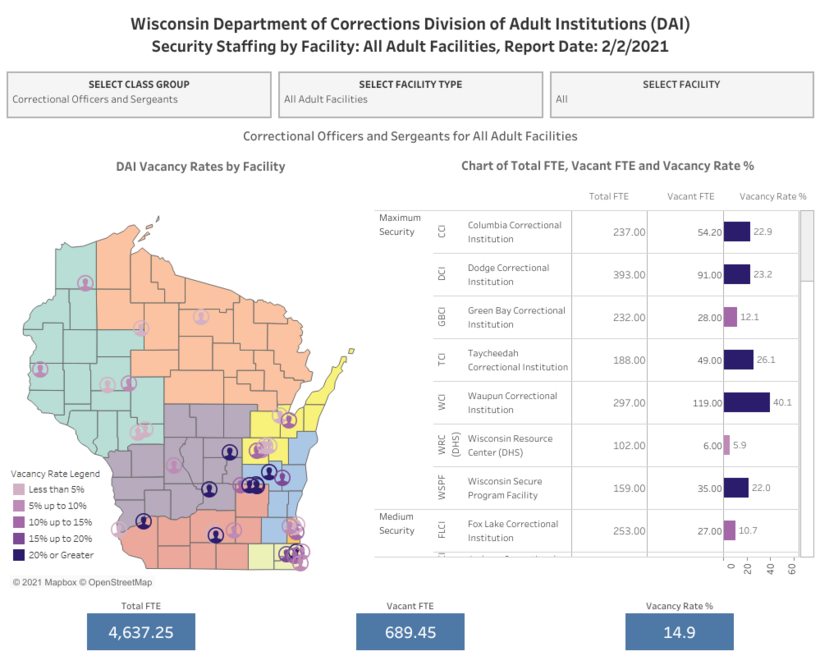 Screenshot taken Wednesday, Feb. 10, 2021, of data from the Wisconsin Department of Corrections.

COVID-19 Cases Down 98 Percent From Peak In November

During the hearing Wednesday, Carr highlighted that active cases of COVID-19 in state prisons have dropped dramatically since the height of a surge in cases in November.

On Wednesday, the state’s correctional facilities had 40 active cases among inmates, down from 2,294 cases at its peak Nov. 23.

"That's a 98 percent decrease in active cases since that peak in late November," Carr said.

Reports among staff were also down with 48 active cases of the virus Wednesday, said Carr.

"We don't know what will happen with the COVID variants. We don't know if it will surge again. There's just so much we don't know that it's important that people living close together, as inmates are, do get vaccinated," said Schuldt. "There's some political pushback on that, but it's hard to believe that people sentenced to X number of years in prison face a death penalty because they did something wrong."

Republican lawmakers have proposed a bill that would bar prisoners from getting vaccinated sooner than others.

Prisons face significant challenges in limiting the spread of the virus due to overcrowding and use of shared facilities. Carr said correctional staff are currently being vaccinated. Inmates are among groups who the Department of Health Services has determined will be eligible to get the vaccine beginning in March.

Corrections officials have taken steps to prevent the spread of the virus in state prisons, including reducing the population, wearing masks, screening workers, limiting inmate movements and enhanced cleaning.

Despite precautions, more than half the state’s prison population — 10,789 inmates — have tested positive for the virus. At least 25 inmates have died during the pandemic, according to DOC figures.

Editor's note: This story was updated with information from the DOC on overtime costs for 2020.