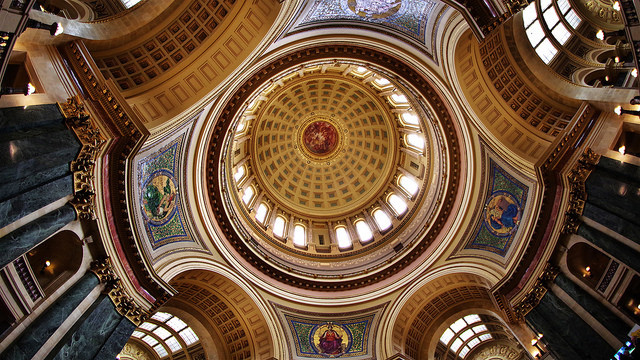 The Corrections Funding Is Aimed At Filling A Growing Number Of Vacancies At Wisconsin Prisons
By Shawn Johnson
Share:

Starting wages for Wisconsin prison guards would increase 14 percent under a measure approved Tuesday by Republicans on the Legislature's budget committee.

Employees throughout state government would also receive 2-percent raises in each year of the upcoming biennial budget under a separate measure approved by GOP lawmakers.

The extra funding to boost wages for correctional officers is aimed at filling the large number of vacancies in Wisconsin prisons, which have driven up overtime costs and compounded staffing challenges at institutions that are overcrowded.

The vacancy rate for all Wisconsin correctional institutions hit nearly 15 percent in April of 2019 according to the Legislature's nonpartisan budget office.

It was much higher in some prisons. For example, the maximum security Waupun Correctional Institution had a vacancy rate of nearly 32 percent in April.

The plan Republicans passed Tuesday would increase state funding by $36.8 million in the next budget, which is about $13 million more than Gov. Tony Evers proposed.

Under the GOP corrections proposal, the starting salary for corrections officers would go from $16.65 per hour to $19.03 per hour. Evers' budget would have increased starting correction officer pay to $18.59 per hour.

"This is an important part of an investment that we need to make in corrections to both address the shortages in staffing as well as acknowledge the value and the importance of our staff that run these facilities," said Rep. Mark Born, R-Beaver Dam.

Outside of the budget process, the Evers administration had already approved $5-per-hour raises at a handful of institutions like Waupun where the vacancy rates were highest. The GOP motion would withhold extra funding from those facilities in the first year of the upcoming budget.

Some Republicans criticized Evers for offering raises to some institutions and not others, saying the governor was punishing facilities that had done a good job.

Democrats, like Rep. Evan Goyke, D-Milwaukee, disputed that, saying Evers was doing what he could to address vacancies that had skyrocketed during the eight-year administration of former Republican Gov. Scott Walker.

"This was, and has been, a growing and festering problem that has gone unsolved by the majority party over their time in the majority with a Republican governor," Goyke said.

In addition to the targeted funding for corrections officers, the committee's action Tuesday would set aside funding for a pair of 2-percent wage increases for all state workers.

Republicans didn't approve another Evers initiative that would have spent about $8 million on market wage and parity adjustments.