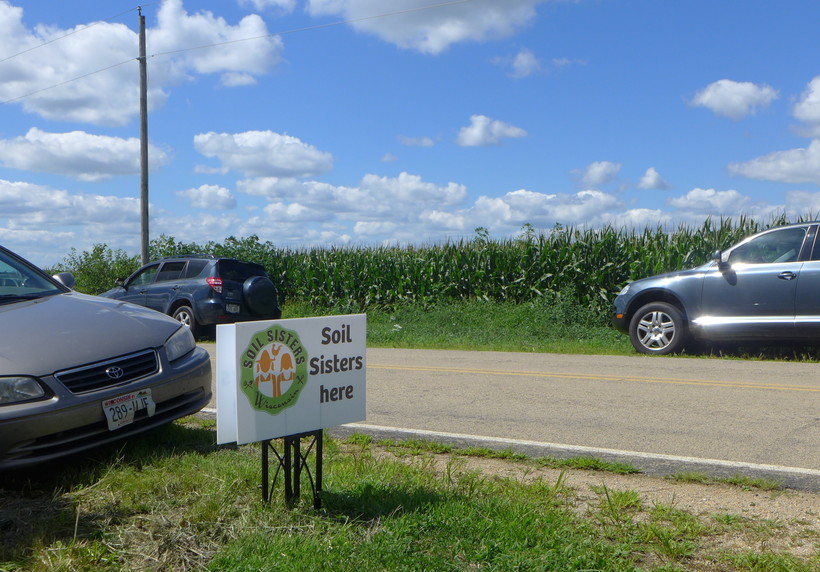 Cars lined up outside a recent farming workshop put on by the Soil Sisters near Monroe.

As Farms Decline In The US, Women-Led Ag Businesses Continue To Increase
By Hope Kirwan
Share:

Lindsay Morris Carpenter had no background in agriculture when she decided to leave art school, but she ended up with an apprenticeship on an organic vegetable farm.

"The way that I stumbled into it, I was looking for a skill. I knew enough about myself that I wanted to have a career, I wanted to devote my life to something," said Carpenter, now the co-owner and operator of Grassroots Farm near Monroe.

The U.S. Department of Agriculture's 2012 census reported 14 percent of primary farm operators were women. While still a small percentage, it’s almost twice as many woman-led farms as there were 20 years ago.

“Women make up one of the fastest growing groups of new farmers and are particularly driving the organic and sustainable movement,” said Lisa Kivirist, coordinator of Midwest Organic and Sustainable Education Service’s Rural Women’s Project.

Despite the recent increase in numbers, Kivirist said women working in agriculture is really nothing new.

"Women have been raising food for forever. It's really in the last couple of decades that we've been recognized, be it economically, be it politically, be it socially," said Kivirist, who's a farmer herself. "That's what I think really fuels the current movement today."

Kivirist and Carpenter are both members of the Soil Sisters, a group of women farmers in southern Wisconsin that provides advice and information on how to start or grow a sustainable farming operation.

At a recent workshop near Monroe, farmers from the group led discussions on a variety of topics, from funding opportunities and organic certification to farm/life balance and integrating families into the farm.

Kivirist said these topics reflect the way women tend to see their operations.

"Women tend to see their farms as not just a business and a paycheck but an expression of themselves and their values," Kivirist said.

"I get to be creative similarly to how I was as an art student but actually I'm doing something that I feel a lot more worthwhile doing," she said.

Carpenter said she appreciates the freedom that comes from working on her own farm and the opportunity to nurture, whether it’s livestock or crops.

"Not all of us are parents but in an interesting way, farming gives us an opportunity to create life similarly to how parenting can impact a person," Carpenter said.

While she didn’t immediately click with other, more conventional farmers, Carpenter said she feels a sense of comradery among her ag neighbors.

"I feel like I've done pretty well being accepted within that community. I surprisingly do have a lot in common with white country men," Carpenter said. "We scratch each others back as best we can."

But finding a place in the ag community can be daunting for women thinking about starting their own farm.

"It's exciting but it's overwhelming," said Rebecca Clancy, a participant at the latest Soil Sisters workshop.

Clancy is a pastor of a church and a professor at Elmhurst College near Chicago. She said she was happy with her current career but began to feel like something was missing.

That’s how she ended up buying a 50-acre farm in western Wisconsin. As a teacher, Clancy said it’s very humbling to find herself starting out learning the basics.

But Kivirist said that’s exactly why Soil Sisters was started.

"It can be very isolating and daunting to start any business much less a farm in today's era," Kivirist said. "To know that other women have been there and they've got your back and they're willing to share their learnings and advice and support along the way, is huge."

Kivirist said Soil Sisters is all about building that kind of community, so more women will have the confidence to pursue a career in ag.