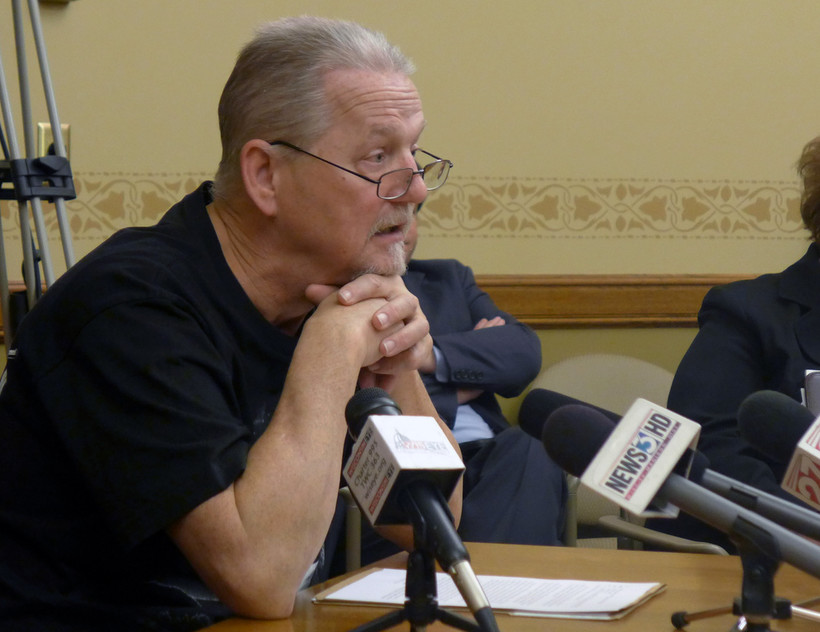 Joseph Frey spent eight years in prison for a rape he didn't commit.

State Ranks Dead Last In Payments. A Bill To Change That Failed This Year
By Gilman Halsted
Share:

Joseph Frey spent eight years in prison for a rape he didn't commit. He was released in 2013 after DNA evidence proved another man committed the crime and the Wisconsin Claims Board awarded him $25,000 in compensation.

If that sum sounds small, that's because it is. Wisconsin offers the lowest compensation rate in the country to people who have been wrongfully convicted. There was a chance that might change this year with a bill that would have provided a tenfold increase in the amount the state pays people who serve time in prison for crimes they didn’t commit. But the measure stalled in the state Senate, leaving exonerees like Frey with scant resources to help rebuild their lives after years behind bars.

"I still have a few dollars left, very little but it is what it is," Frey told a legislative committee earlier this year. "And I‘m not gonna let that stop me from trying to be productive good member of society now."

The bill would have raised the state’s current compensation from $5,000 per year of wrongful imprisonment, capped at $25,000, to $50,000 per year capped at $1 million, the same amount the federal government offers. Frey said the increase was reasonable.

"We don’t ask for a handout, none of us do," he said. "We’re just trying to get on with our lives as best we can, knowing what we have learned over these years and what we have gone through. All we’re asking is to be fairly compensated."

The state Assembly approved the bill unanimously. But the state Senate killed it, in part because it would allow exonerees to seal their criminal records and open records advocates objected. Frey said he is still hoping the proposal will come up for a vote again next year.

"It’s just disheartening that it has to be prolonged like this. It makes it difficult," he said. "I have to keep my faith in the system that it will work out and allow them to do what they need to do to make it work out."

If the bill does pass next year, Frey said he‘ll use the money to open his own print shop and hire ex-offenders to staff it.

"I mean I was a printer for many years and to pay it forward means give everybody else an opportunity who can use it," he said. "I‘ve been working with former inmates and stuff back in the day. I know their capabilities. I know what they can do and given the right circumstances they can be very fruitful there."

Frey, who turned 57 at the end of March, now works part time at the Wisconsin Senior Employment program helping older workers like himself who are trying to get back into the job market. He also volunteers selling bread and pastries at the Just Bakery, a training  center for ex-offenders learning to be bakers.

Christopher Ochoa, another exoneree said that decision to give back is something many exonerees make once they’re released.

"None of us have sat there and blown our money," he said. "There’s people who have started nonprofits with their settlement to help others. That’s all we want, a chance in life and to help others. And that’s how we use our money … wisely."

Ochoa was wrongfully convicted of murder in Texas in 1989 and freed with the help of the Wisconsin Innocence Project in 2001 after the real killer confessed. He won a $5 million settlement from the city of Austin. He used it to get a law degree at the University of Wisconsin in Madison where he now has his own law practice.

If the bill passes, the Wisconsin Innocence Project estimates it would cost the state $2.7 million to compensate the nine people eligible to receive the increased compensation.