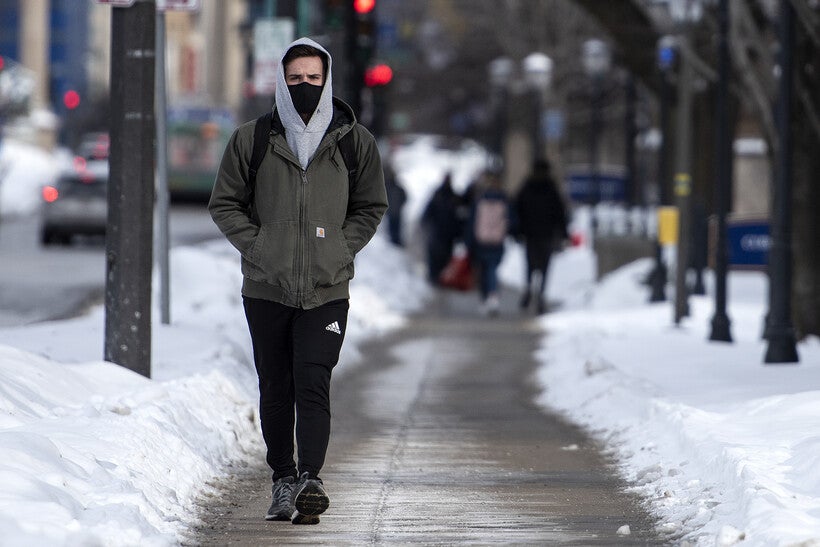 A pedestrian wears a face mask while walking on a sidewalk Friday, Feb. 12, 2021, in Milwaukee. Angela Major/WPR

For the first time ever, state saw more deaths than births
By Bridgit Bowden
Share:

Wisconsin neither gained nor lost significant numbers of residents from 2020 to 2021, according to new data released by the U.S. Census Bureau. From July 2020 to July 1, 2021, Wisconsin’s population changed by only 3,585 people.

The data shows continued slowing of population growth in Wisconsin and nationwide. According to the Census Bureau, the country's growth is the slowest it has ever been in the nation's history.

In Wisconsin, there were more deaths than births for the first time since the state began keeping vital records, said demographer David Egan-Robertson of the Applied Population Lab at the University of Wisconsin-Madison. That can be attributed to the COVID-19 pandemic, he said.

"It's just been a complete sea change in terms of how we view the population," Egan-Robertson said.

The state did gain nearly 5,000 people as a result of net migration — or the number of people who moved here minus those who moved away.

But Dale Knapp, director of Forward Analytics at the Wisconsin Counties Association, said that isn't enough to meet the state's future workforce needs.

"The workforce shortage is here to stay, at least for 10 to 15 years," he said. "And probably going to get worse."

Wisconsin did fare slightly better than most of its neighboring states, with Illinois losing more than 1 percent of its population.

Although it's too soon to know for sure, Knapp suspects Illinois' loss might have been the Badger State's gain.

"My guess is Wisconsin was the beneficiary of some of those families moving out of the state," he said.