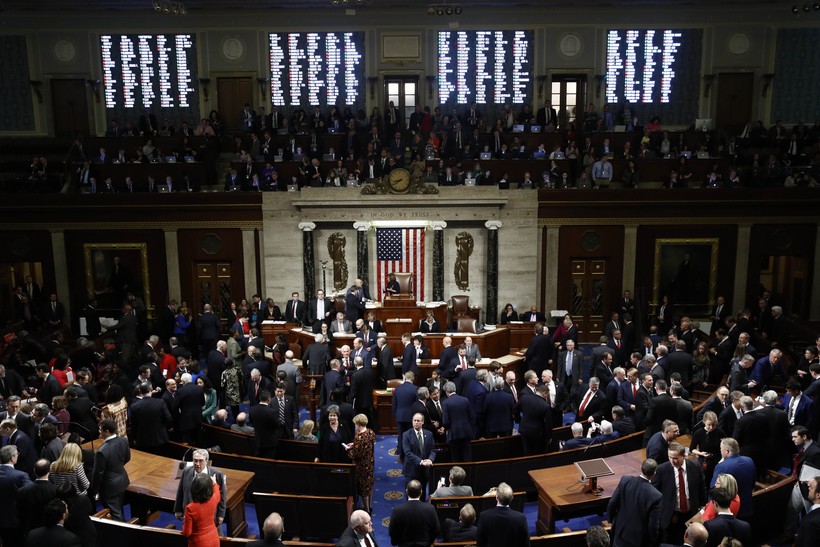 House members vote as House Speaker Nancy Pelosi of Calif., stands on the dais, during a vote on article II of impeachment against President Donald Trump, Wednesday, Dec. 18, 2019, on Capitol Hill in Washington. Patrick Semansky/AP Photo

Wisconsin's Delegation Divided As US House Votes To Impeach Trump

The vote followed a day of debate in the U.S. House of Representatives that saw members of Wisconsin's congressional delegation sharply divided, with Democrats saying Trump had given them no choice and Republicans attacking the process as an effort to undo the 2016 election. All of Wisconsin's Democratic representatives voted for impeachment while all of the state's Republicans voted against it.

Most of Wisconsin's delegation had already announced their plans ahead of Wednesday's vote with the exception of Kind, whose western Wisconsin district voted for Trump three years ago.

Kind issued a written statement after his vote, saying it was clear to him he viewed his vote as a signal to future presidents of what is acceptable behavior.

"Until now, I have reserved judgment, waiting for all the facts to come out," Kind said. "I’ve reviewed the evidence and followed the hearings. It’s clear the President’s actions were a flagrant abuse of constitutional power; it was unlawful, and it jeopardized our national security."

Other Democrats, like U.S. Rep. Mark Pocan of Dane County, had been saying for months that impeachment was the only course left for Congress. Pocan said the evidence was clear Trump had used the power of his office to pressure Ukraine to investigate his political rivals.

"This is about a perfect storm," Pocan said from the House floor. "Months of activity directly ordered by the president to his senior cabinet and political appointees. An orchestrated plan demanding a foreign power interfere in our democracy."

"We're here because the majority caucus — the Democratic caucus — has been hijacked by the radical left," Sensenbrenner said Wednesday. "They have wanted to reverse the course of the 2016 election ever since Donald J. Trump won that election."

U.S. Rep. Glenn Grothman, an outspoken Trump supporter, joined Sensenbrenner in speaking out against impeachment Wednesday, saying Democrats were pushing it because they didn't like Trump's policies on issues ranging from immigration to food stamps.

"President Trump is keeping his campaign promises, and you hate him for that," Grothman said.

But Milwaukee Democratic U.S. Rep. Gwen Moore said the effort to impeach Trump was bigger than a policy dispute.

"We're not talking about a public policy dispute," Moore said from the House floor. "We're talking about a president who subverted national security by soliciting foreign interference in our elections. The exact thing our founding fathers feared."

The House passed two articles of impeachment, one on "abuse of power" and another on "obstruction of Congress."

It's now up to the Republican-controlled U.S. Senate to decide what kind of impeachment trial to conduct. GOP leaders there have made it clear they have no plans to remove Trump from office.