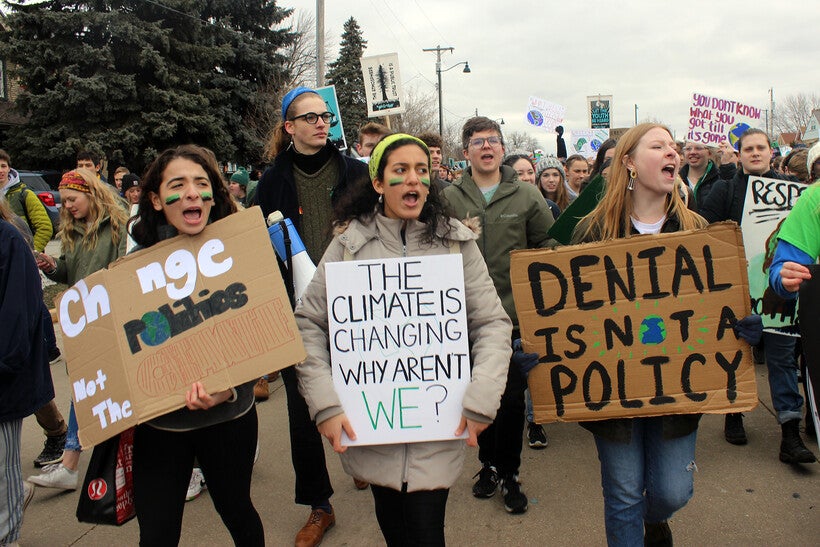 Activists both young and old — in Wisconsin and across the world — left school and work Friday to go on strike for the climate.

The climate strikes are part of a global movement championed by Greta Thunberg, the 16-year-old Swedish climate activist whose weekly school strikes have gained worldwide attention. Ten strikes were planned across Wisconsin alone, according to Wisconsin's Youth Climate Action Team, a primary organizer of Wisconsin's strikes.

Ella Syverson, a senior at Ashland's Lake Superior High School and organizer of the Ashland climate strike, said Thunberg’s story shows that individual action can snowball into a movement. That's why it's important for people to participate in the climate strike Friday even if only for a few minutes, Syverson said on Thursday.

"One person joining this strike really does make a difference," Syverson said.

"This is an issue globally as well as locally," she said.

In Milwaukee, a growing crowd gathered Friday morning outside City Hall. As of 11 a.m. Friday, Milwaukee police estimated 500 people were preparing to march. Strikers played drums, while someone else played the flute.

Those in Milwaukee marched from City Hall to North Point Park, where a rally was taking place to "demand the city declare a climate emergency," the strike's website read. 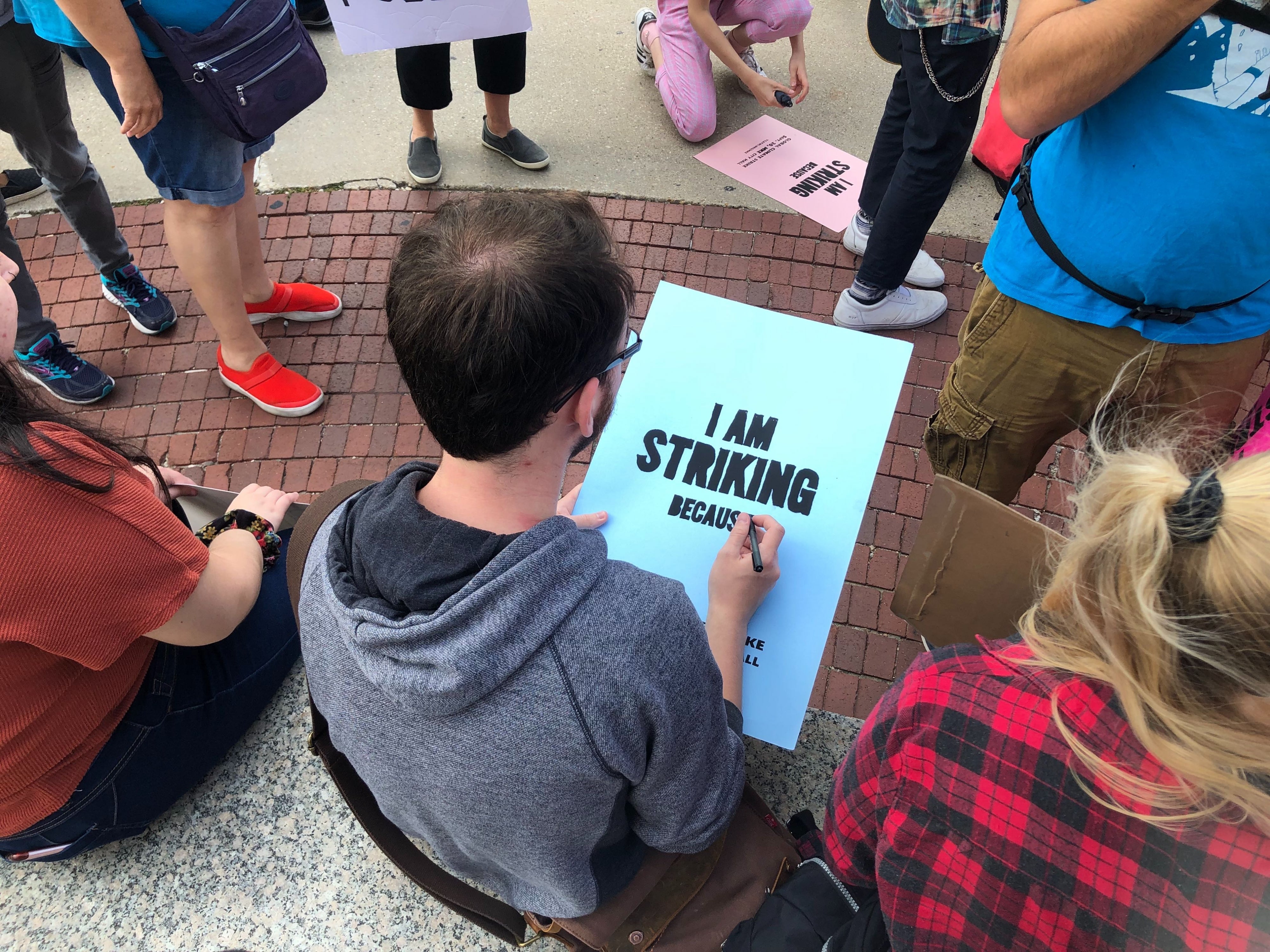 An attendee of a global climate strike in Milwaukee writes on a sign that says "I am striking because." Alana Watson/WPR

Paul Zasadny, a self-described local shaman, attended the strike in Milwaukee with a cart of herbs. He said he was there to be supportive.

"I’ve got all the herbs to heal the nation. I'm a person of sacredness and I support the community," he said Friday morning while outside City Hall. "This is the full shabang."

More than 100 people gathered at the University of Wisconsin-Eau Claire campus mall at 10:30 a.m. Friday to make signs and speak before marching to the Eau Claire City Hall at noon. 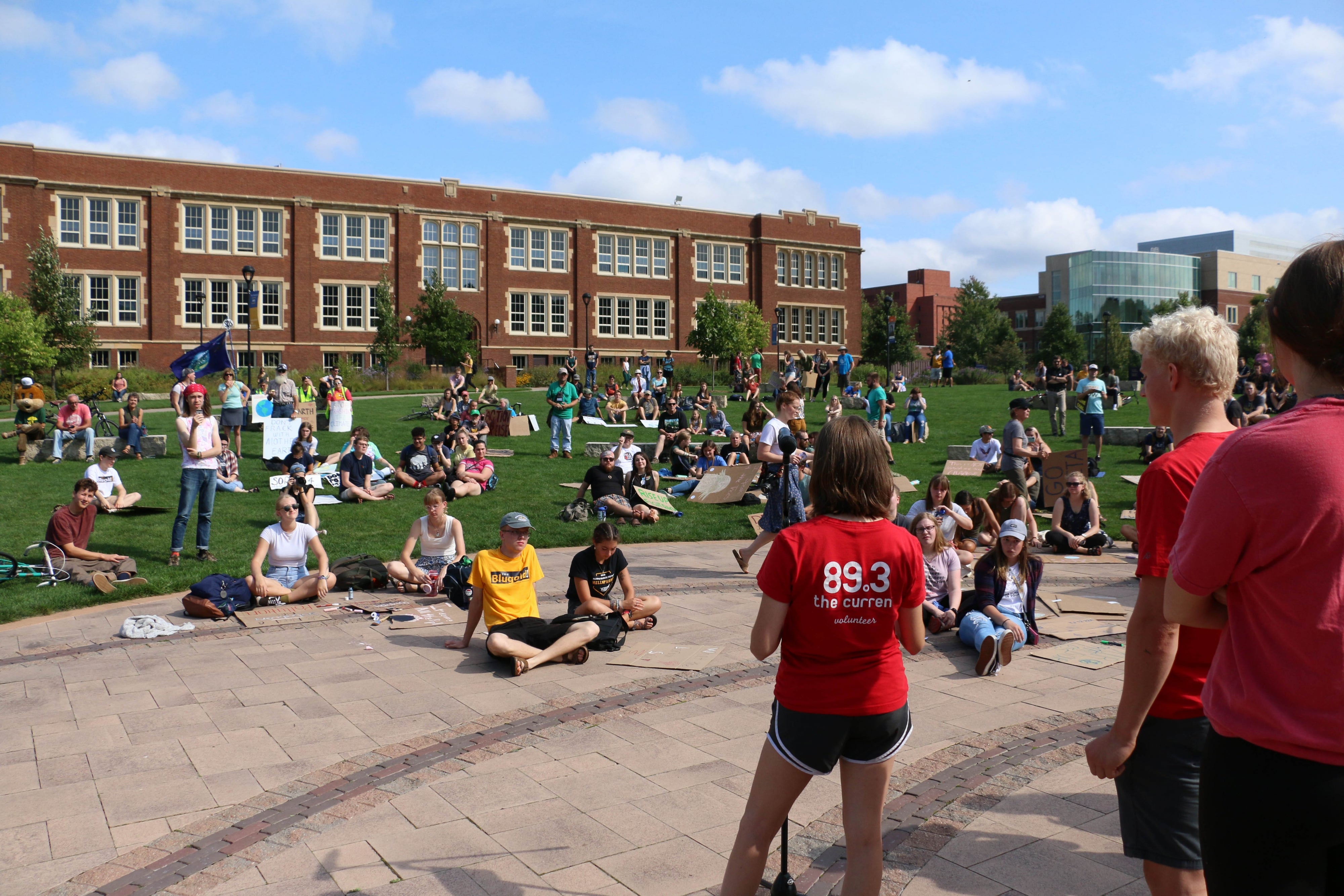 More than 100 people gathered at the University of Wisconsin-Eau Claire campus mall to hear from a list of speakers while others made signs for a climate strike march to the Eau Claire City Hall. Rich Kremer/WPR

Rachel Hamele was one of several who spoke at the strike, telling attendees the climate strike was sure to get attention but it wouldn't do much unless those participating mobilize politically.

"Get up and vote!" Hamele shouted "If you can’t vote get your parents, grandparents, teachers, friends, enemies and pets to go voice their opinion, shout it to the rooftops and shout it to the top of the flames of the Amazon rainforests that are still burning."

Hamele told the crowd of mostly college and high school students they will be the generation that will feel the adverse effects of climate change.

"So, we will see the impact of legislative decisions and we’re ending up being the people that have to advocate for our own health and safety," Hamele said.

Strikers in Madison gathered at the state Capitol before marching to Madison Gas and Electric (MGE), where they rallied and called for the utility to switch to all-sustainable energy sources.

Thirteen-year-old Brynne Dixson-Kruijf was one of a few thousand people to attend the strike. She held a handmade sign that read: "I'll do my homework once you do yours! Climate action now."

She said she wants to take action on climate change.

"It's gonna be my future, and I don't get to make the decisions, other people do," she said. "So if I can have any influence on that, then I can influence my future and what's going to become of me." 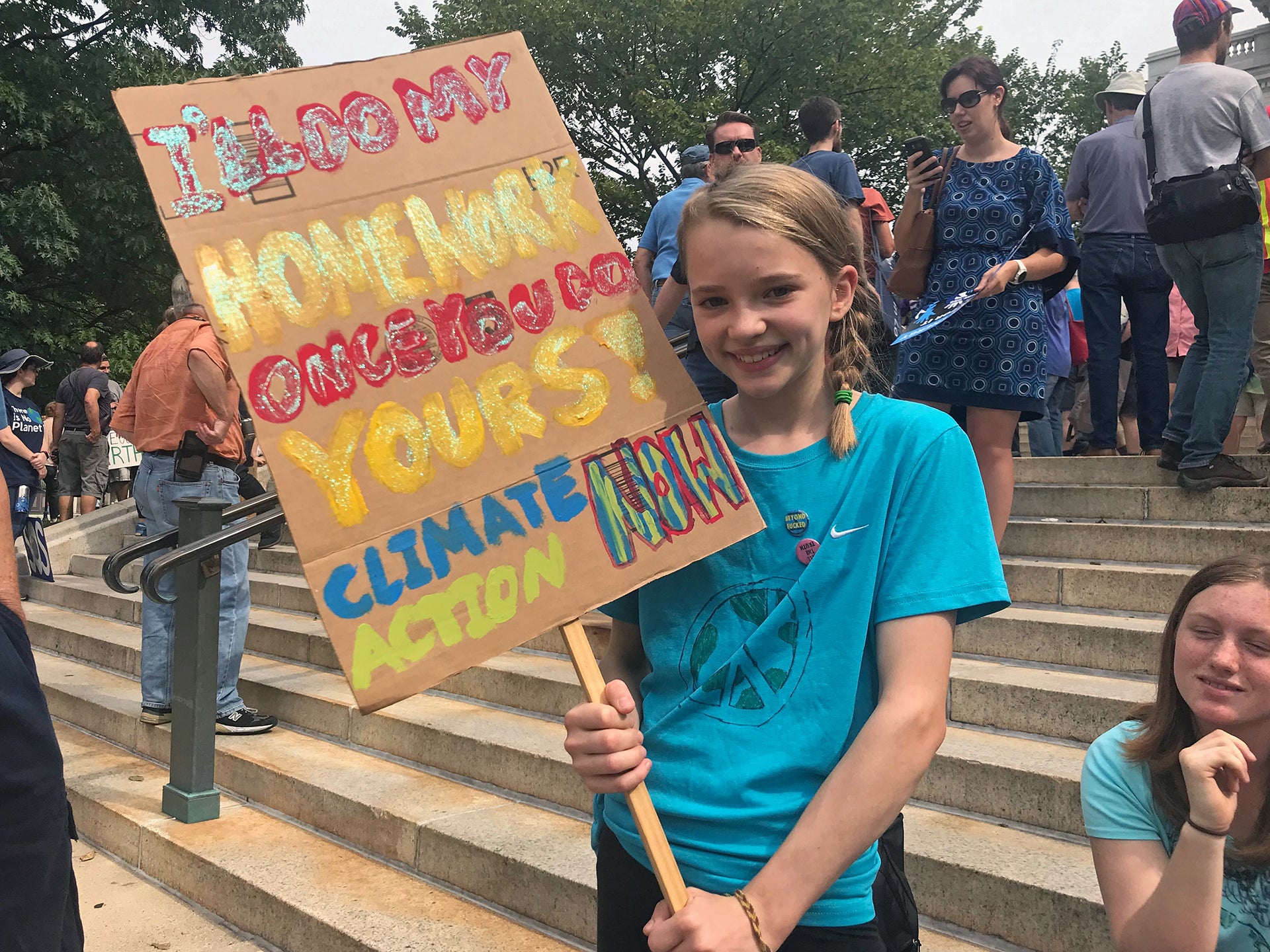 Thirteen-year-old Brynne Dixson-Kruijf attended the climate strike in Madison. Her sign reads, "I'll do my homework once you do yours! Climate action now." Miranda Suarez/WPR Matt Meyer, left, and his children Ada, 10, and Isaac, 6, from Madison attended the climate strike in Madison. Miranda Suarez/WPR

Matt Meyer and his children Ada, age 10, and Isaac, age 6, are from Madison and attended the strike in their hometown. Ada said she’s here "cause the Earth is gonna die, and we need to fix it."

Phyllis Hasbrouck is a spokesperson for 350 Madison, the local branch of an international climate activism group and a partner of the strike. She said MGE must meet this demand to use only sustainable energy sources quickly.

"It needs to be on a path to be 100 percent renewable as soon as possible — certainly by 2030. And they're not doing that yet. So they need some pressure," Hasbrouck said. Paul Zasadny, a self-described shaman, attended the global climate strike in Milwaukee. Zasadny was at the strike using herbs to show support and to heal the earth. Alana Watson/WPR

Schultz said this is part of MGE's goal to become carbon neutral by 2050, and even faster, if possible.

The strikers are also demanding that MGE end its reliance on coal, which provided almost half of the utility’s electricity in 2016, according to MGE's website.

"We have no sole ownership of coal fire generation and we continue to move away from it," Schultz said, referring to MGE’S partial shares in the Columbia coal power plant near Portage and the Elm Road plant in Oak Creek.

The Madison strike started bright and early Friday with meditation and yoga in Law Park, followed later in the day with a concert on the steps of the state Capitol, the rally at MGE and a livestream of a speech by Thunberg.

Syverson, the organizer in Ashland, said people shouldn’t underestimate the power of the strikes, even if they're organized by teens.

"We are all going to be of age to vote very soon," she said.